Video/Pics: Coast Guardsman shoots at shark from ship as it approaches swimming Guardsmen

A member of the U.S. Coast Guard, assigned to Coast Guard Cutter Kimball, saved his fellow guardsmen from a shark sneaking up on them during a swim break in the Pacific Ocean on Wednesday.

The incident occurred when guardsmen on the Kimball were given a break from their duties for a swim call. As his fellow guardsman swam and splashed around, Maritime Enforcement Specialist First Class 1st Class (ME1) Cintron, noticed an eight-foot shark, which was likely either a Long-Fin Mako or Pelagic Thresher Shark, swimming up to his teammates. Cintron fired a controlled burst scaring the shark away.

The incident was captured on video and shared on the official Cutter Kimball Facebook page Thursday morning.

“First, everyone is safe,” the post began. The post notes the crew had taken a swim call because operations were complete for the day, the weather was good and there were no other ships around for miles. As the crew went for a swim, the shark encounter began. 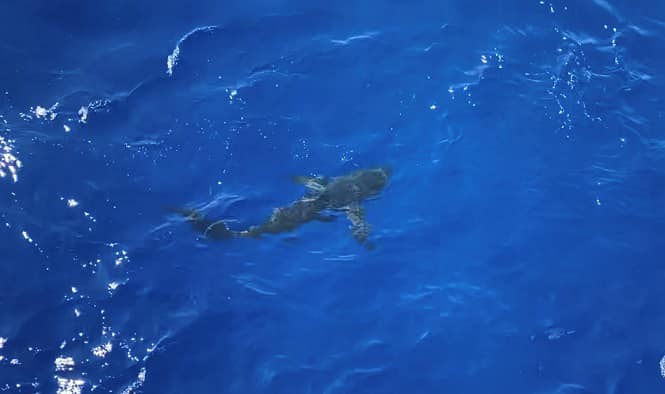 “ME1 Cintron fired a well-aimed burst right at/on top of the shark to protect shipmates just feet away,” the Facebook post continued. “It turned away for a few seconds then turned back. We kept directing people out of the water while keeping a clear line of sight on the shark. ME1 fired bursts as needed to keep the shark from his shipmates with amazing accuracy. The shark would wave off with each burst but kept coming back toward our shipmates.”

While the shark kept coming back in between burst of gunfire, Cintron’s accurate fire kept the shark at bay long enough for his fellow guardsmen to get out of the water.

“BRAVO ZULU [Well Done] to ME1 Cintron who likely saved one or more of his shipmates from a shark attack!! Many others helped, such as the entire Boat Crew. It was a team effort with everyone doing their part to work the problem,” the Facebook post said. 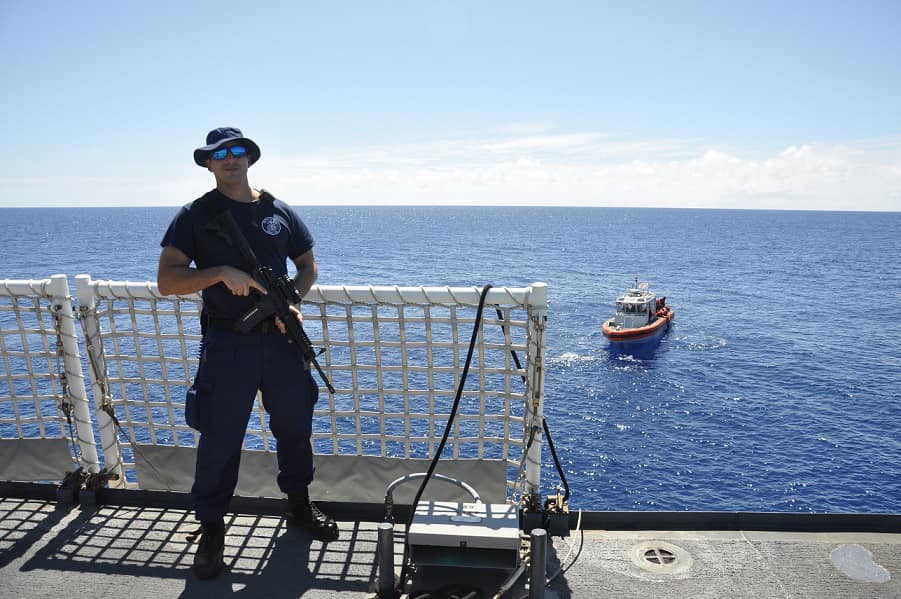 The Coast Guard crew does not believe the shark was injured by the shooting.

After the incident, the crew shifted its downtime activities from swim call to fishing.

“The crew’s top requests for movies on the Flight Deck that night were “JAWS” followed by “Sharknado” (seriously),” the crew’s Facebook post continued.

USCGC Kimball is a Legend-Class cutter based out of Coast Guard Base Honolulu.