Statues have been toppled. Flags have been lowered. America’s reckoning with its history of racism has spread across the country and is now casting its eyes toward the sea.

Will the names of Navy ships be next?

Two of them have ties to the Civil War Confederacy: the guided-missile cruiser Chancellorsville, named after a pivotal battle won by the South, and the Maury, a survey ship named after pioneering oceanographer Matthew Fontaine Maury, who resigned from the U.S. Navy to join the Confederate Navy.

Two other ships, the carrier Carl Vinson and the carrier John C. Stennis, are named after Southern U.S. congressmen who were staunch supporters of the Navy and also backed racial segregation. 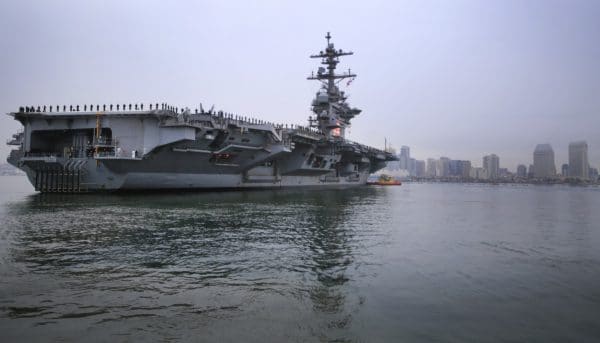 Recent media reports say Navy leaders privately have been discussing what to do about the ships amid a broader Department of Defense review of names and symbols that honor those who fought to preserve slavery or uphold white supremacy.

Both the U.S. Senate and House passed $741 billion defense authorization bills this month that include language calling on the Pentagon to strip its property of ties to the Confederacy.

The House bill requires the changes to happen within one year, and the Senate bill, three. Negotiators from the two sides will meet to resolve that and other differences.

President Donald Trump has threatened to veto the legislation over the naming issue, calling it a misguided attempt to rewrite history. But both the House and Senate passed their bills with large-enough majorities to override any veto, assuming no votes change during final tallying.

Although most of the attention so far has been on the 10 Army bases that are named after Confederate officers — including Fort Bragg in North Carolina, Fort Hood in Texas, and Fort Benning in Georgia — the bills include provisions that also apply to ships.

If there are name changes, they would join a complicated and sometimes controversial history that dates to America’s early days, when the Continental Congress first decided, in 1775, that it wanted a Navy.

“There are periods of time when the Navy stuck resolutely to its rules about how to name ships, and times when it has varied,” said Eric Wertheim, a Washington D.C. defense consultant and author who specializes in international naval fleets.

“It is absolutely one of those things inextricably linked to politics, culture, and the way people view history at any given time.”

The first ship in the Continental Navy fleet was a nod to the country’s British ties. It was named Alfred, after the Anglo-Saxon king Alfred the Great, according to a report by the Naval History and Heritage Command.

In 1819, Congress put the secretary of the Navy in charge of naming ships, and the responsibility has rested there, more or less, ever since.

That legislation also put in place the idea that classes of ships should draw their names from specific categories. One group would be named after U.S. states, another after rivers, and a third after major cities and towns. No two currently operating ships could carry the same name.

None of it has proved immune to human sentimentality, rivalry or political persuasion.

In 1869, a Navy secretary decided too many ships were being named for Native Americans and changed several of them to figures from antiquity such as Medusa, Goliath and Atlas.

For a long time, almost 160 years, the Navy mostly refrained from naming anything after a living person. That changed in 1973, when Vinson, an influential Georgia legislator, got selected for a carrier.

Since then, it’s happened another 20 times, according to a July 16 report by the Congressional Research Service. Among the honorees: Civil rights leader and Congressman John Lewis, who had a new class of oilers named after him in 2016. The first one, which will also carry his name, is being built in San Diego. Lewis died July 17 at age 80.

Naming decisions become controversial for a variety of reasons, but tend to upset traditionalists when established categories get ignored.

“Ship naming has become both political and stupid,” said Norman Polmar, a defense consultant and analyst who has written several articles about the process.

He cited as an example the decision in 2012 to name a littoral combat ship for Gabrielle Giffords, the Arizona congresswoman who was shot in the head a year earlier at an event in Tucson and had just retired to focus on her health.

In giving her that honor, Navy Secretary Ray Mabus applauded her courage while recovering and said, “She inspired the nation with remarkable resiliency and showed the possibilities of the human spirit.”

But, Polmar said, littoral combat ships are supposed to be named for regionally important cities and communities. Changing the designations can dilute the meaning, he said.

Similarly, aircraft carriers in recent years have recognized mostly former presidents, along with two members of Congress. In January, the Navy said it would name one for Doris Miller, a Black mess attendant who received the Navy Cross for firing on Japanese planes during the attack on Pearl Harbor in 1941 and was killed later in the war when a Japanese torpedo sunk the Liscome Bay, an escort carrier.

He would be the first Black and the first enlisted sailor to have a carrier named after him. “Doris Miller stood for everything that is good about our nation,” Acting Navy Secretary Thomas Modly said when he announced the naming. “His story deserves to be remembered and repeated wherever our people continue the watch today.”

Polmar agrees with the honor, just not the type of ship. “He is a genuine hero, don’t get me wrong,” he said. “But we name destroyers for heroes. It all feels like we’re just making it up as we go. What are we doing?”

There’s a belief in some maritime circles that changing the name of a ship is bad luck.

Hundreds of ships acquired from other military branches or federal agencies over the years have received different monikers. During World War II, the names of new ships were regularly changed at the last minute to honor other ships recently lost in combat.

In 1971, while the submarine Redfish was under construction, its name was changed to honor late Congressman William H. Bates, a staunch Navy supporter. Adm. Hyman Rickover reportedly explained the switch this way: “Fish don’t vote.”

In 1982, another submarine, the Corpus Christi, named after the city in Texas, had already launched when religious objections — Corpus Christi is Latin for “body of Christ” — prompted a change to the “City of Corpus Christi.”

“The Navy generally refrains from renaming its ships once they’ve entered service,” military writer Christopher Cavas noted in a recent Defense & Aerospace Report article tied to the current controversy over Confederate links. “Politics and social mores certainly play a part in choosing the names of new ships, and it is not unusual for a ship to be renamed one or more times prior to entering service, but it would be quite unusual for ships to be renamed in service due to changing sensitivities.”

But the sensitivities that are changing this time seem especially potent, fueled by ongoing street protests about racial inequality and police misconduct. Organizations across the country are reflecting on their histories and their heroes, and adjusting monuments large and small accordingly.

“We’ve seen throughout history how our views of particular leaders change,” said Wertheim, the consultant and author, pointing to the up-and-down reputation of Civil War general and later president Ulysses S. Grant as an example. “Battles we glamorized in the past, like those against the Indians, are no longer revered.”

He added, “We see things in a different light, and what’s acceptable changes with it. It’s all part of the evolution. That’s how history works.”