Massive California wildfires expected to get worse as lightning, wind storms move in

The second- and third-largest fires in California history are expected to grow in the next few days as a new thunderstorm system moves over the state, producing dry lightning and gusty winds.

The National Weather Service issued red-flag warnings across large swaths of Northern and Central California that went into effect before sunrise Sunday.

The storms could spark more blazes and cause existing ones to spread rapidly, and that is unwelcome news for firefighters, who are already stretched thin.

Crews on Sunday were battling dangerous fires from the Santa Cruz Mountains to wine country and beyond, using a small break in the weather to get a jump on the conflagrations, many of them ignited by lightning strikes. 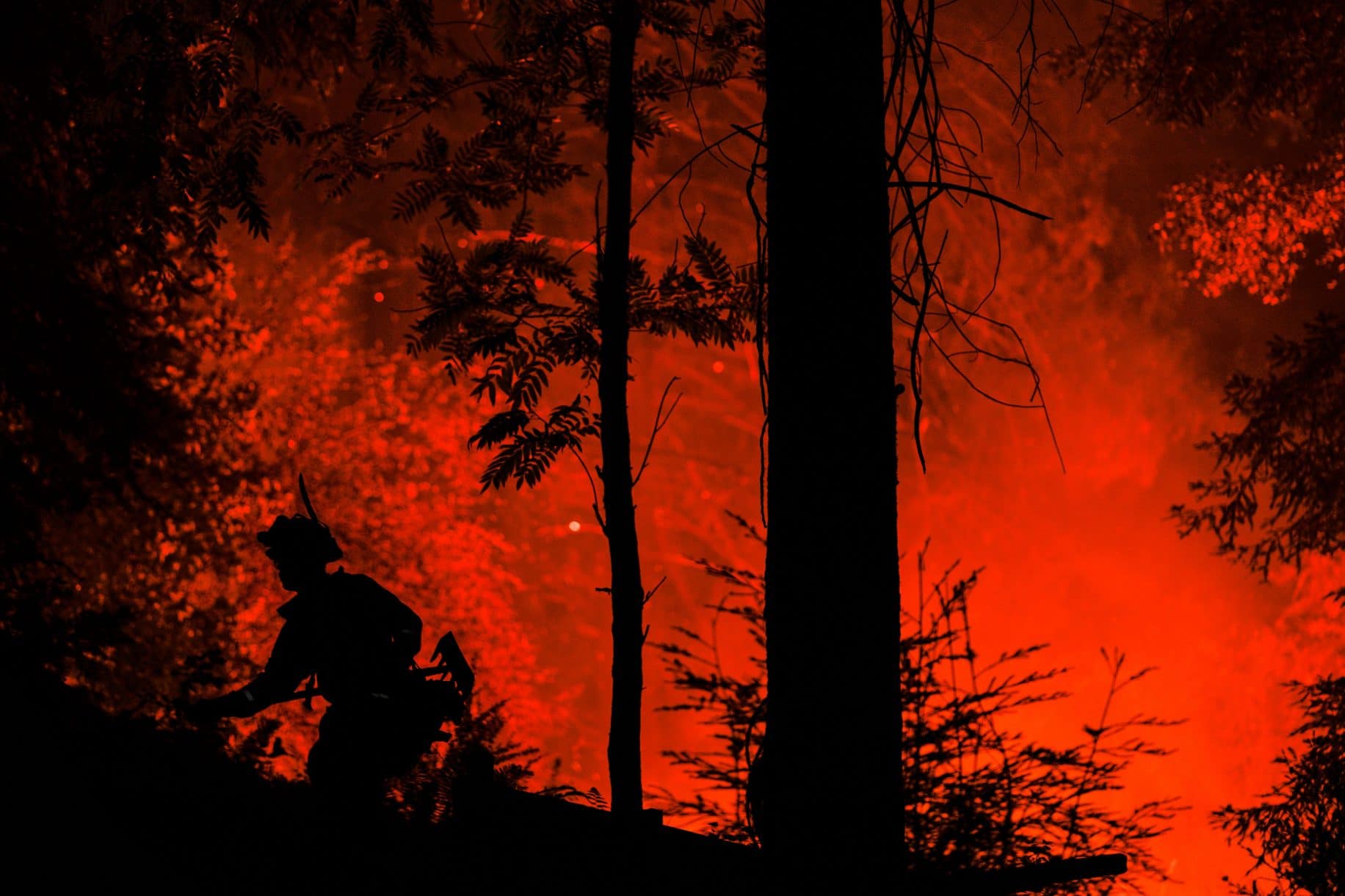 Firefighters respond to a structure fire along Riverdale Boulevard as the fire line creeps up on Highway 9 during the CZU Lightning complex fire on Sunday, August 23, 2020 in Boulder Creek, California. (Kent Nishimura/Los Angeles Times/TNS)

On Saturday, Gov. Gavin Newsom announced that the White House had approved California’s request for a presidential major disaster declaration to bolster the state’s emergency response to wildfires burning in Northern California.

About 1.3 million acres have burned in California in just a month, according to a Los Angeles Times analysis — an astonishing toll so early in the fire season.

In all of 2019, about 259,000 acres in California burned, according to the Idaho-based National Interagency Fire Center, although that was following a relatively wet winter.

Across California, “over 14,000 firefighters are on the front lines of more than two dozen major fires and lightning complexes,” or groups of fires, said Jeremey Rahn, California Department of Forestry and Fire Protection public information officer, at a Sunday news conference.

“To have both of those going on at the same time … gives us the magnitude of what has happened here in this state,” Sean Kavanaugh, incident commander on the LNU fire, said Sunday. “Over all jurisdictions, 1.3 million acres have been burned in recent time.”

The LNU fire in Napa, Sonoma, Lake, Solana, Yolo and Colusa counties had killed four people, destroyed 871 homes and other buildings and was 21% contained as of Sunday night. Firefighters were working to strengthen containment lines ahead of the storms but said area residents should be ready to evacuate.

“With the weather predicted, the red flag warning issued, I can’t stress the importance of being prepared to leave,” Cal Fire Unit Chief Shana Jones said.

The SCU Lightning Complex fire began as a collection of about 20 blazes in areas of Contra Costa, Alameda, Santa Clara, Stanislaus and San Joaquin counties and by Sunday had merged into two conflagrations.

The flames, which were 10% contained Sunday night, were burning primarily through dry grass and brush in steep, remote areas that hadn’t burned in years. Firefighters were bracing for gusty winds and the possibility of dry lightning starting at about 3 p.m., said Barbara Rebiskie, public information officer on the SCU fire.

“There’s a lot of dead fuel up there,” Rebiskie said. “And the erratic winds, the 7% humidities and the lightning — it’s not a good combination.”

An estimated 20,265 homes and commercial buildings were threatened and five had been destroyed, with a new evacuation order issued at 3 a.m. Sunday for parts of Alameda County. In the hours that followed, a public information center set up to deal with queries from the public was flooded with so many phone calls that it crashed, Rebiskie said. By late Sunday morning, operators were still receiving about 1,000 calls an hour, she said.

She urged people to keep calling back if they got a busy signal, and to visit the incident’s webpage to see a full list of evacuations.

Firefighting resources have been pouring into the region in recent days. But firefighters say it’s simply not enough.

The size and scope of the fires are unprecedented, Daniel Swain, a climate scientist at the University of California, Los Angeles, wrote in a blog post.

“As I’ve stated publicly, I’m essentially at a loss for words to describe the scope of the lightning-sparked fire outbreak that has rapidly evolved in northern California — even in the context of the extraordinary fires of recent years,” he wrote. “It’s truly astonishing.”

In some places, officials said they were being turned down for state help and left to beg equipment and manpower from volunteers and local agencies.

“Many of these firefighters have been on the lines for 72 hours, and everybody is running on fumes,” said Assemblyman Jim Wood, D-Healdsburg, whose district includes wine country areas currently under siege. “Our first responders are working to the ragged edge of everything they have.”

With blazes overwhelming the crews available, fire experts say state officials are now being forced to prioritize which fires will get resources, and to change how equipment and crews will be used. Though officials often try to build defensible lines to contain blazes, fire experts said the focus was now on saving lives and structures. That means the current blazes could burn for weeks. 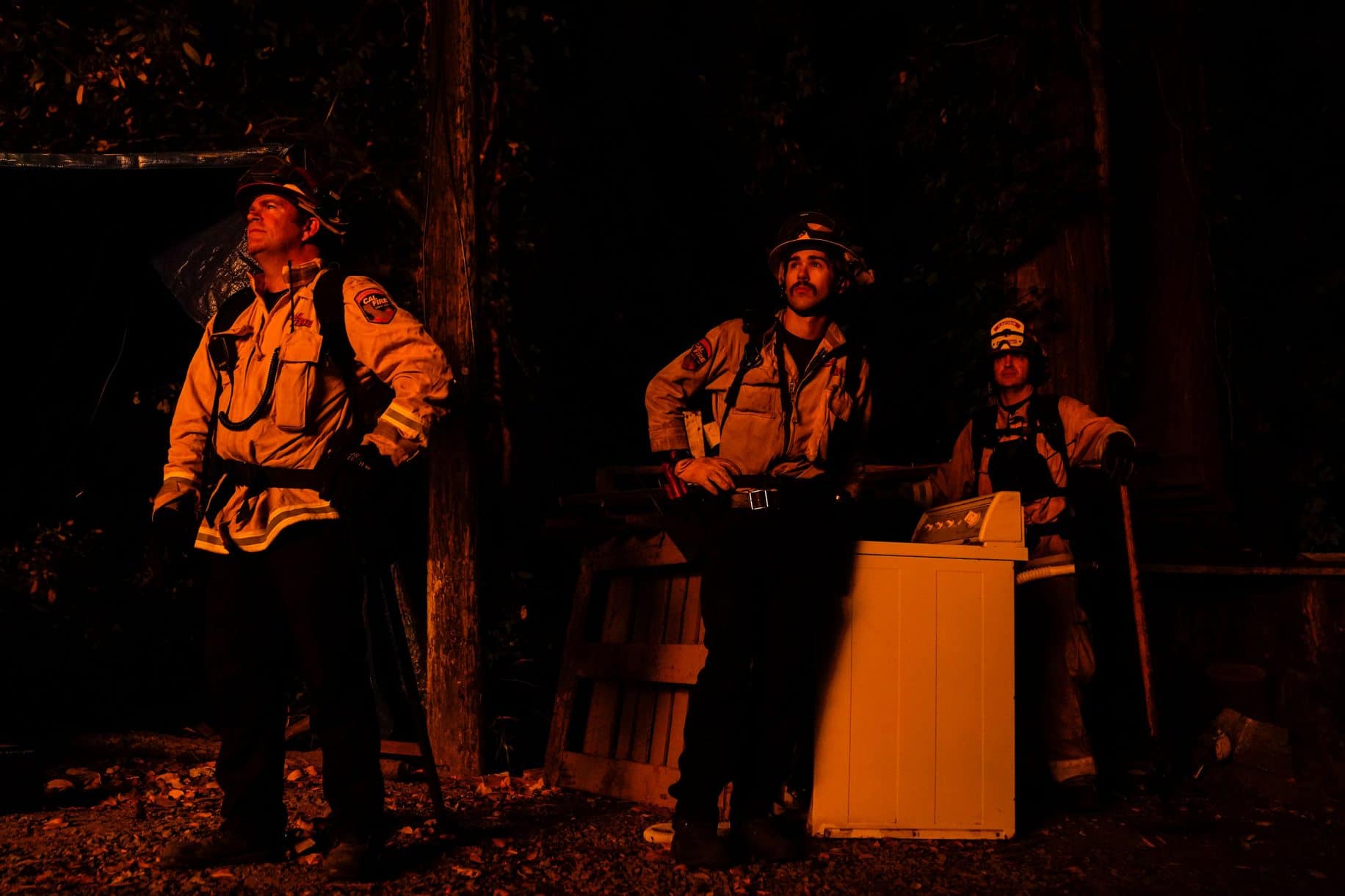 Firefighters respond to a structure fire along Riverdale Boulevard as the fire line creeps up on Highway 9 during the CZU Lightning complex fire on Sunday, August 23, 2020 in Boulder Creek, California. (Kent Nishimura/Los Angeles Times/TNS)

“At the statewide level, we do get into this mode where we start wondering where the biggest loss is going to be, what’s the highest priority, and that is where the resources are going to go,” said Lenya Quinn-Davidson, a fire specialist with the University of California Cooperative Extension.

Forecasters on Sunday afternoon were monitoring an area of moisture with the potential to generate thunderstorms that was just off Central California and moving toward the Monterey area, said Carolina Walbrun, meterologist with the National Weather Service in Monterey.

The front was expected to continue to move north, affecting a stretch of the state from Monterey to the San Francisco Bay Area, she said.

“The fear that we have as these thunderstorms develop is that it can create strong downdrafts and result in further fire spread,” Walbrun said. “We also have the potential of generating additional fires with dry lightning from these thunderstorms. There’s very little moisture associated with it.”

The first round of thunderstorms were expected to hit hardest Sunday night into Monday, with a second event forecast Monday night into Tuesday, she said.

In addition to bringing gusty winds, the system was also causing winds to shift to more of a southwesterly direction, which could mean that firefighters have to change focus from protecting communities to the south of fire lines to those to the north, she said.

“The issue that is going to hamper this whole thing is going to be the lack of resources that are available for firefighting because there are so many fires active right now, all resources are depleted,” Walbrun said. “So any additional starts are just going to stress the system even more.”

Already, more than 2,000 homes and commercial buildings have been destroyed by fire in California since late July. They include nearly 1,000 that were decimated since Aug. 15, which marked the start of what officials were calling a “lightning siege” of about 12,000 strikes that started an estimated 585 fires in California.

In San Mateo and Santa Cruz counties, the CZU Lightning Complex fire was threatening multiple communities and had forced 77,000 people from their homes. The blaze began as a collection of about 22 fires that largely merged into one, challenging firefighters as they tried to keep the flames away from the towns dotting the rural, mountainous area.

The Los Angeles County Fire Department said it had deployed five engine strike teams, consisting of 23 engines and 101 firefighters, to help with the effort.

The fire had consumed 74,000 acres and was 8% contained as of Sunday night. It threatened 24,323 structures and had destroyed 175, the vast majority in Santa Cruz County. One person had been killed in the fire.

Firefighters were taking advantage of fairly calm winds to attack the fire on the ground as much as possible as they scrambled to make progress ahead of the inclement weather, said Daniel Potter, a Cal Fire public information officer.

“We’re going to get as much accomplished as we can before the front hits us,” he said. “And then adapt and overcome any new fires that may start in the area due to the lightning coming through.”

Crews were working to establish containment lines and fire breaks around the city of Santa Cruz and the campus of UC Santa Cruz in a bid to keep the blaze from damaging the community if it made a run in that direction.

“It’s pretty much impossible to stop when a good wind is pushing the fire front faster than we can move,” Potter said.

Officials were asking people to stay out of evacuation zones to avoid hazards including fire and downed trees and wires, and to keep roads open for emergency vehicles.

They also warned about criminals taking advantage of the crisis. Authorities on Saturday morning arrested five people on suspicion of looting, grand theft, burglary and conspiracy after they were stopped driving away from the Fall Creek Drive area, the Santa Cruz County Sheriff’s Office said.

Someone also broke into the department vehicle of a firefighting commander while he was out battling the blaze, stole his wallet and drained his bank account, Mark Brunton, Cal Fire operations chief, said at a briefing Sunday.

“It’s saddening, it’s sickening,” Brunton said, “and we are doing everything we can to try to help the community and unfortunately these (things) happen.”

The Santa Cruz County Emergency Operations Center said it was requesting that visitors refrain from traveling there through Sept. 1 to keep overnight accommodations available for evacuees.

More than 45,000 Santa Cruz County residents have been displaced by the fires, and though the county is operating 12 shelters, capacity is limited because of COVID-19, officials said. Many local hotels, motels and vacation rentals are also booked.

“DO NOT visit us now,” the county said in a tweet. “Air quality is poor, ash is everywhere, and we’re dealing with an unparalleled catastrophe. This is no time for a day at the beach.”