Lebanon’s beleaguered prime minister and the rest of his Cabinet resigned Monday, the country’s health minister said, six days after a catastrophic explosion in Beirut’s port leveled large swaths of the capital.

News that Prime Minister Hassan Diab was stepping down came as demonstrators gathered in the capital’s central districts for a third consecutive day of protests against the country’s ruling elite. Diab was expected to address the country later Monday; his government is expected to assume a caretaker role until a new administration can be formed.

The massive blast last Tuesday, ranked as one of the world’s largest non-nuclear explosions, was caused by the detonation of more than 2,750 tons of ammonium nitrate — a chemical used as both a fertilizer and explosive — which blew up after a fire started in a nearby warehouse in the port. It resulted in a wave of destruction that ravaged entire neighborhoods, killed more than 160 people dead and injured 6,000 others. Hundreds are still missing. 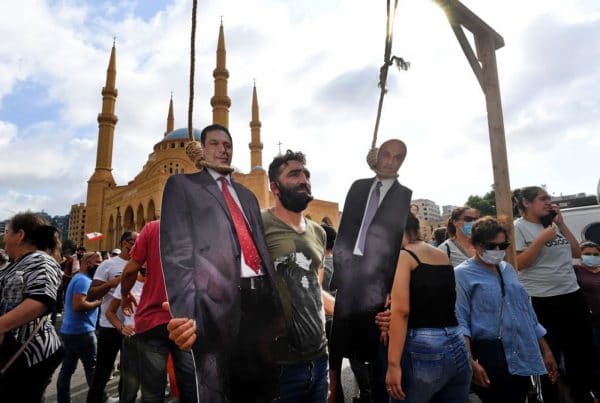 A man poses for a picture with a cardboard cut-out of Lebanon’s Prime Minister Hassan Diab (left) and Lebanese Forces executive chairman Samir Geagea hung by Lebanese protesters in downtown Beirut on August 8, 2020, during a demonstration against a political leadership they blame for a monster explosion that killed more than 150 people and disfigured the capital Beirut. (Photo by AFP via Getty Images/TNS)

Meanwhile, 300,000 people have been left homeless, with damages estimated anywhere between $10 billion and $15 billion. An international aid conference Sunday spearheaded by President Emmanuel Macron of France, which once controlled Lebanon as a protectorate, raised $298 million.

Several government ministers had already quit prior to Diab’s resignation amid widespread condemnation of the government’s performance not just immediately after the blast but also over the last six months, during which Lebanon’s economy has gone into a tailspin. For many Lebanese, the explosion was the ultimate indictment of the country’s political class, which is often derided as being almost comically corrupt but is now seen as perilously negligent.

Though Diab had promised a swift investigation into the explosion, authorities have continued to tussle over whether international parties would be involved in the proceedings. Lebanese President Michel Aoun said last week in a statement on Twitter that calls for an international-led investigation were “a waste of time.”

Hundreds of enraged Lebanese gathered in Beirut’s downtown area by early Monday evening in anticipation of Diab’s address. Since the blast, protests that erupted last fall over the country’s floundering economy but that were lately in abeyance out of coronavirus fears have resumed.

In clashes markedly more violent than those last fall, security forces have responded with tear gas and, according to local media reports, rubber bullets and live rounds.