Hurricane Laura is set to slam into the U.S. Gulf Coast early Thursday as a powerful Category 4 storm, unleashing deadly storm surges, flash floods and destructive winds that could inflict as much as $25 billion in damage.

Laura is already a Category 3 major hurricane with maximum winds of 125 miles per hour, the National Hurricane Center said in an advisory at 11 a.m. in New York. It’s forecast to peak at 145 miles per hour over the Gulf of Mexico, the NHC said. That would make it just shy of Category 5 strength, the highest on the Saffir-Simpson scale, with stronger winds than Hurricane Harvey had at landfall in 2017. The storm could cause $20 billion to $25 billion in damage and economic losses, Chuck Watson, a disaster modeler with Enki Research, said on his blog. 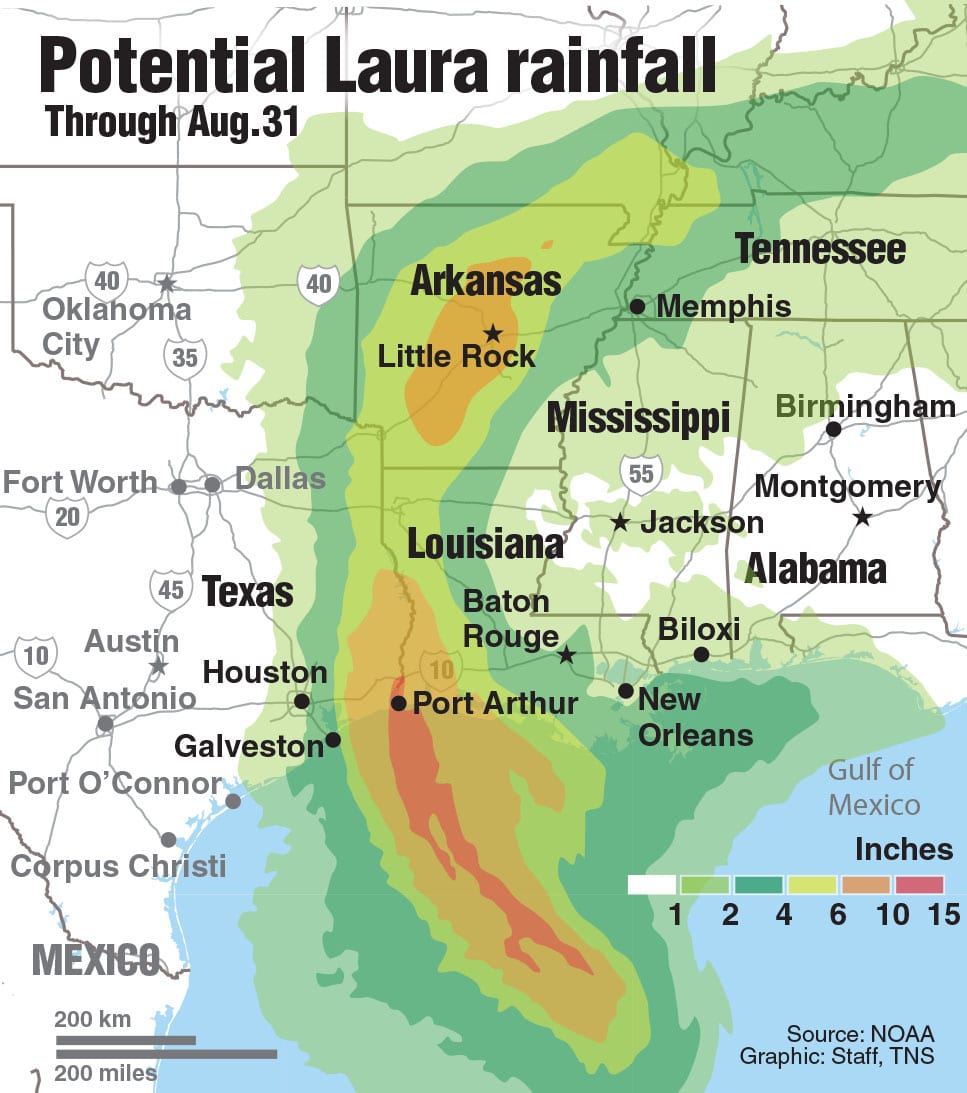 Laura is just the latest storm to take shape in what’s already been an extremely active Atlantic hurricane season. With three months left to go in the season, Laura will be the seventh system to hit the U.S., a record for the time of year, and the first major hurricane to hit the Gulf Coast since Michael in 2018. Laura has prompted mandatory evacuations in coastal areas and is targeting the heart of America’s energy industry, shutting more than 80% of oil production in the Gulf of Mexico and a third of the Gulf Coast’s refining capacity.

For anyone living in an area that floods or is in the direct path of Laura’s landfall, “there is no calculation to be made: Get out,” Watson said. “Whatever fears you might have about COVID are secondary — even those with health issues that might make riding out a weaker storm an option.”

The governors of Texas, Louisiana and Mississippi have all declared emergencies. Laura killed at least nine people in Haiti and the Dominican Republic, The Associated Press reported.

Though strong hurricanes often lose power just before landfall, Laura’s forward speed might prevent that from happening, allowing it to come ashore as a Category 4 storm, said Don Keeney, a meteorologist with commercial forecaster Maxar. The last Category 4 or 5 hurricane to hit the U.S. was Michael in 2018. 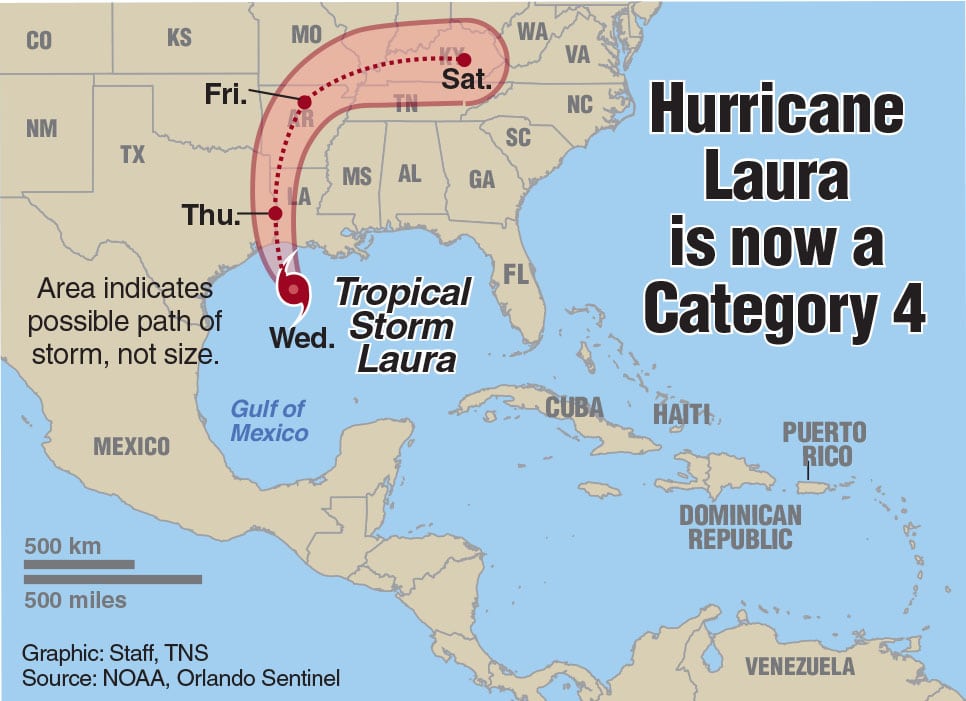 “Unsurvivable storm surge with large and destructive waves will cause catastrophic damage from Sea Rim State Park, Texas to Intracoastal City, Louisiana, including Calcasieu and Sabine Lakes,” Dan Brown, a forecaster at the hurricane center, wrote in an update.

After Laura rips across the Gulf Coast, it will leave a path of destruction through the Mississippi Valley before turning on the Mid-Atlantic region that just recovered from Hurricane Isaias, said Jim Rouiller, lead meteorologist with the Energy Weather Group. There is a possibility Laura will re-intensify once it makes it to Maryland, New Jersey and possibly New York, he said.

There could be crop damage in western Louisiana and Arkansas, but to the east Laura’s rains will be beneficial as they spread into Mississippi, Maxar’s Keeney said.

The tropical threat has prompted more than 84% of oil output and nearly 61% of natural gas production in the Gulf of Mexico to be shut, according to the Interior Department’s Bureau of Safety and Environmental Enforcement.

Gulf Coast refineries and petrochemical plants are often located in low-lying areas vulnerable to flooding. In 2017, an Arkema SA chemical plant about 25 miles east of Houston had a fire and explosion after it was flooded by Hurricane Harvey. Last September, Exxon shut its Beaumont refinery in Texas because of flooding from Tropical Storm Imelda.

Laura could push sea levels as high as 20 feet in the Sabine Pass area and along parts of the Texas coast where the Henry Hub is located, the hurricane center said. Storm surges kill almost half of all people who die in hurricanes.

“The refineries will be under water by quite a bit,” Rouiller said. “It may take some time before the refineries and transportation get back to normal down there.”

Some of the largest U.S. refineries are winding down in advance of Laura, shutting in nearly 2.9 million barrels a day of capacity. That’s about 30% of U.S. Gulf Coast refining capacity, according to Lipow Oil Associates. President Donald Trump has ordered the Strategic Petroleum Reserve to be made available in case of storm-related fuel disruptions, U.S. Energy Secretary Dan Brouillette said in an interview with Bloomberg TV.

Energy platforms in the Gulf of Mexico that account for as much as 17% of America’s oil production and about 3% of gas output are designed to withstand storms of this magnitude.

Many areas along the coast, including Port Arthur and Jefferson County, Texas, have ordered residents to evacuate.

Laura will be a record seventh system to hit the U.S. by August, and more are coming, Rouiller said.

Western sugarcane in Louisiana between Lake Charles and Lafayette will be the most at risk, said Drew Lerner, president of World Weather Inc. in Overland Park, Kansas. For cotton crops, some parts of the western Mississippi Delta area, and central and interior parts of Arkansas also could be impacted, he said.