Feds claim nearly 100 arrests made in Operation LeGend; many are gun, drug charges

About two weeks since the launch of Operation LeGend, a controversial initiative that sent more than 200 federal law enforcement officials into Kansas City, local and federal officers have made 97 arrests, U.S. Attorney Tim Garrison announced Friday.

“This is our first detailed report to update the public on the progress against violent crime that has been achieved as a result of Operation LeGend,” Garrison said in a release. “We are striving to maintain as much transparency as possible for an ongoing law enforcement operation. I’ve been communicating with local pastors, community leaders, victims of violent crime, and public officials, and will continue to provide regular updates.” 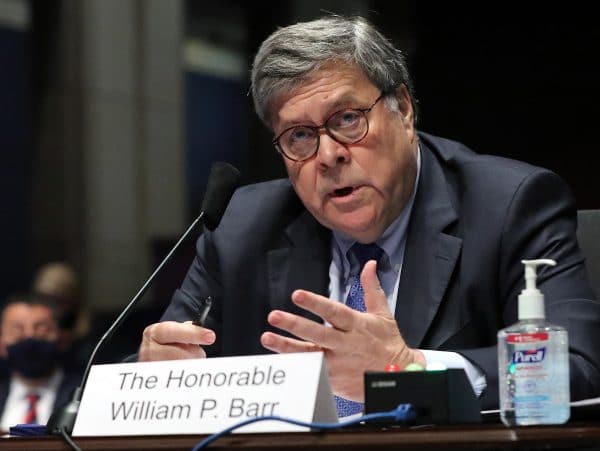 U.S. Attorney General William Barr testifies during a House Judiciary Committee hearing on Capitol Hill on Tuesday, July 28, 2020 in Washington, D.C. In his first congressional testimony in more than a year, Barr faced questions from the committee about his deployment of federal law enforcement agents to Portland, Oregon, and other cities in response to Black Lives Matter protests; his role in using federal agents to violently clear protesters from Lafayette Square near the White House last month before a photo opportunity for President Donald Trump in front of a church; his intervention in court cases involving Trump’s allies Roger Stone and Michael Flynn; and other issues. (Chip Somodevilla/Pool/Abaca Press/TNS)

Of the remaining arrests, 49 were fugitives with state or federal arrest warrants and 39 were referred to state courts, officials said. Five of the arrests were for homicides and other arrests were for assault, drug trafficking, illegally possessing firearms, robbery, child molestation and sexual assault.

Officials said that agents and officers also seized 35 firearms, nearly 3 kilograms of methamphetamine, hundreds of pills including OxyContin and ecstasy, heroin, cocaine, crack cocaine and about $40,000 in cash.

Details on seven of the defendants facing federal charges and two of the five homicide arrests have either been released by the U.S. attorney’s office or reported on by The Kansas City Star.

U.S. Attorney General William Barr, in House testimony Tuesday, said he misspoke after falsely claiming earlier this month that Operation LeGend had resulted in 200 arrests within two weeks in Kansas City. Hours later Tuesday, Garrison’s office clarified there had been 50 arrests in the Kansas City area since the operation started.

The federal initiative, which officials have said is aimed to reduce violent crime in cities, has received push back from community members who believe sending more law enforcement agents into Kansas City will only continue conflicts between officers and Black residents. Local activists pushing against the initiative said it ignores recent protests against police violence and racism by sending more officers into the city. They’re asking that local police budgets be cut in favor of greater funding for education, health care and other social services to help community members.

Stories of Operation LeGend arrests added to the criticism, as well as worries that the presence of federal agents would look similar to Portland, Oregon, where officers allegedly detained protesters in unmarked vans without identifying themselves. The U.S. attorney’s office said Operation LeGend would not bear any resemblance to Portland.

Operation LeGend was recently expanded to other cities including Chicago, Albuquerque, Cleveland, Detroit and Milwaukee.

Reports: Minneapolis tells citizens 'don't fight', give up and 'cooperate' if robbed