The sight of over 1,400 pieces of sea turtle shells, most about the size of dinner plates, on the floor of a warehouse near Miami International Airport was a sobering reminder that South Florida is a major hub for the illegal wildlife trade.

U.S. Customs and Border Protection seized the shipment of endangered Hawksbill and Green sea turtle shells at an air cargo warehouse in late November last year _ one of the largest seizures of turtle shells ever in the U.S.

Five large boxes full of scutes _ the sections of a sea turtle shell _ had arrived at Miami International Airport that day on a flight coming from the Caribbean, and were scheduled to be loaded on another flight to Asia a day later, CBP said in a statement. 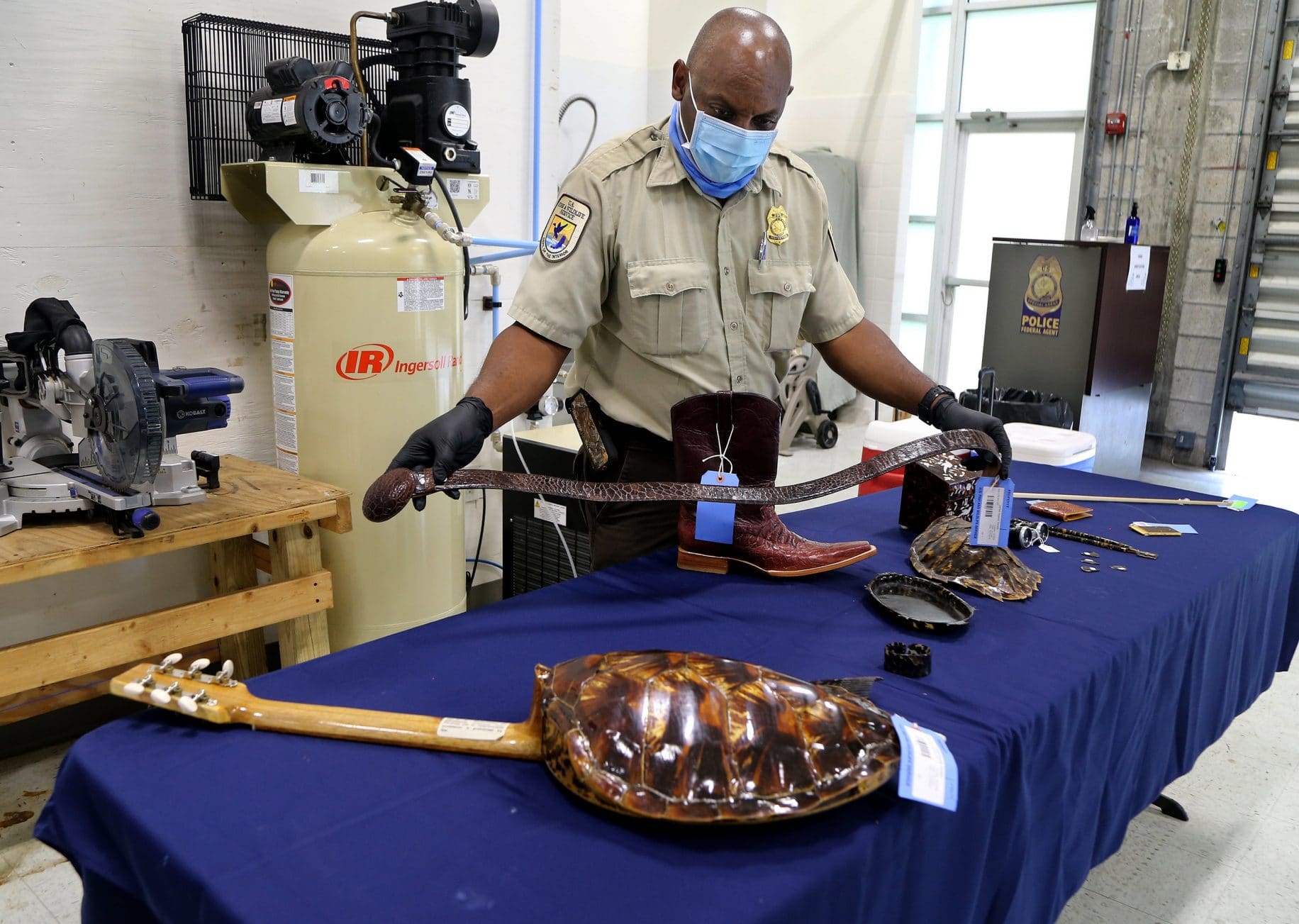 Inspector Bruce Walker, with the U.S. Fish and Wildlife Service, checks a display of previously seized objects made from sea turtle shells as officials get ready to announce the seizing of a shipment containing some 1,400 pieces of endangered sea turtle shell disguised as blue plastic seized at MIA by the U.S. Customs & Border Protection last November, in Doral, Florida, on Aug. 12, 2020. (Pedro Portal/Miami Herald/TNS)

The shell pieces from about 100 turtles were covered with a chalk-like blue paint, and registered in a customs manifest as “plastic recycle” in an attempt to disguise shells that are illegal to sell and export in the United States and most nations. But looking closely, the distinctive brown, orange and light beige hues of hawksbill shells were visible underneath the powdery periwinkle coating.

“Wildlife trafficking is a serious crime that impacts species at home and abroad,” said Aurelia Skipwith, Director of the U.S. Fish and Wildlife Service. “Sea turtles are critical members of healthy ocean ecosystems. Unfortunately, they are also severely impacted by the illegal wildlife trade.”

CBP’s Contraband Enforcement Team and Agriculture Specialists estimated that about 65% of the 290 pounds of scutes came from hawksbill turtles, while 35% came from Green turtles that were likely caught in the Caribbean or Central America. The shipment was among the largest ever seized in Miami.

Both species are protected by the Convention on International Trade of Endangered Species of Fauna and Flora, known as CITES. The international agreement between governments regulates trade in wildlife and plants and bans trade in sea turtle shells. 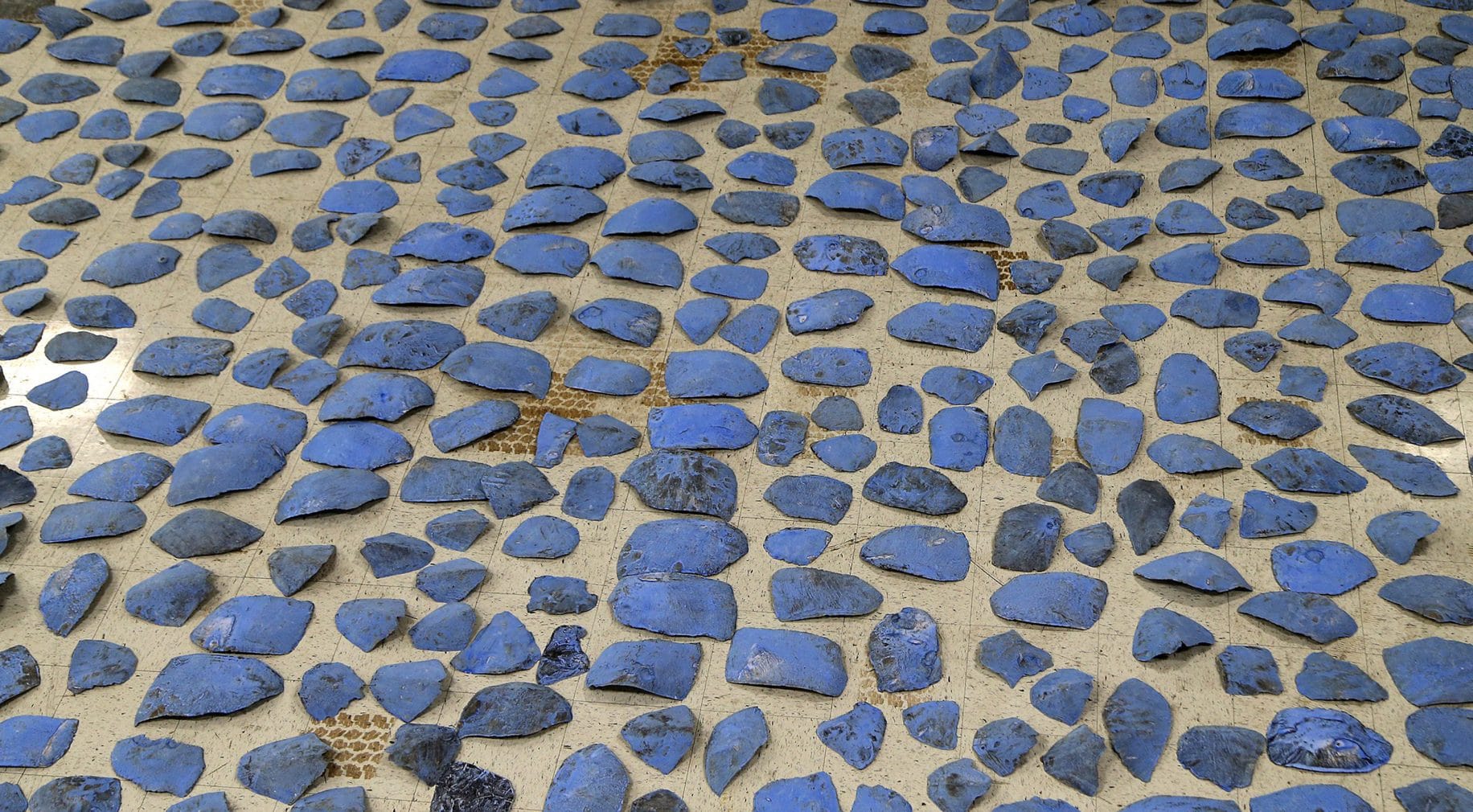 CBP and FWS didn’t arrest anyone in connection with the shipment because these agencies don’t have the authority to conduct investigations in other countries without specific permissions. But the federal agents were allowed to seize the shells because the shipment was in violation of CITES and in transit to other countries.

“Even though there were no prosecutions related to this case, it was still an important action that helped combat wildlife crime,” said Eva Lara, regional supervisor wildlife inspector at FWS’s Office of Law Enforcement. “Seizures can help deter wildlife trafficking by sending a clear message that wildlife crime isn’t welcome here in the U.S.”

Demand for hawksbill scutes, the flexible plates of a turtle shell used in tortoiseshell products like eyeglass frames, combs, brushes, jewelry, musical instrument picks and bow parts and furniture inlay, is driving the critically endangered species to extinction, scientists say. China and other Asian countries are particularly avid buyers, using the beautiful shells in personal and decorative items, and the turtle’s oil in traditional medicine. 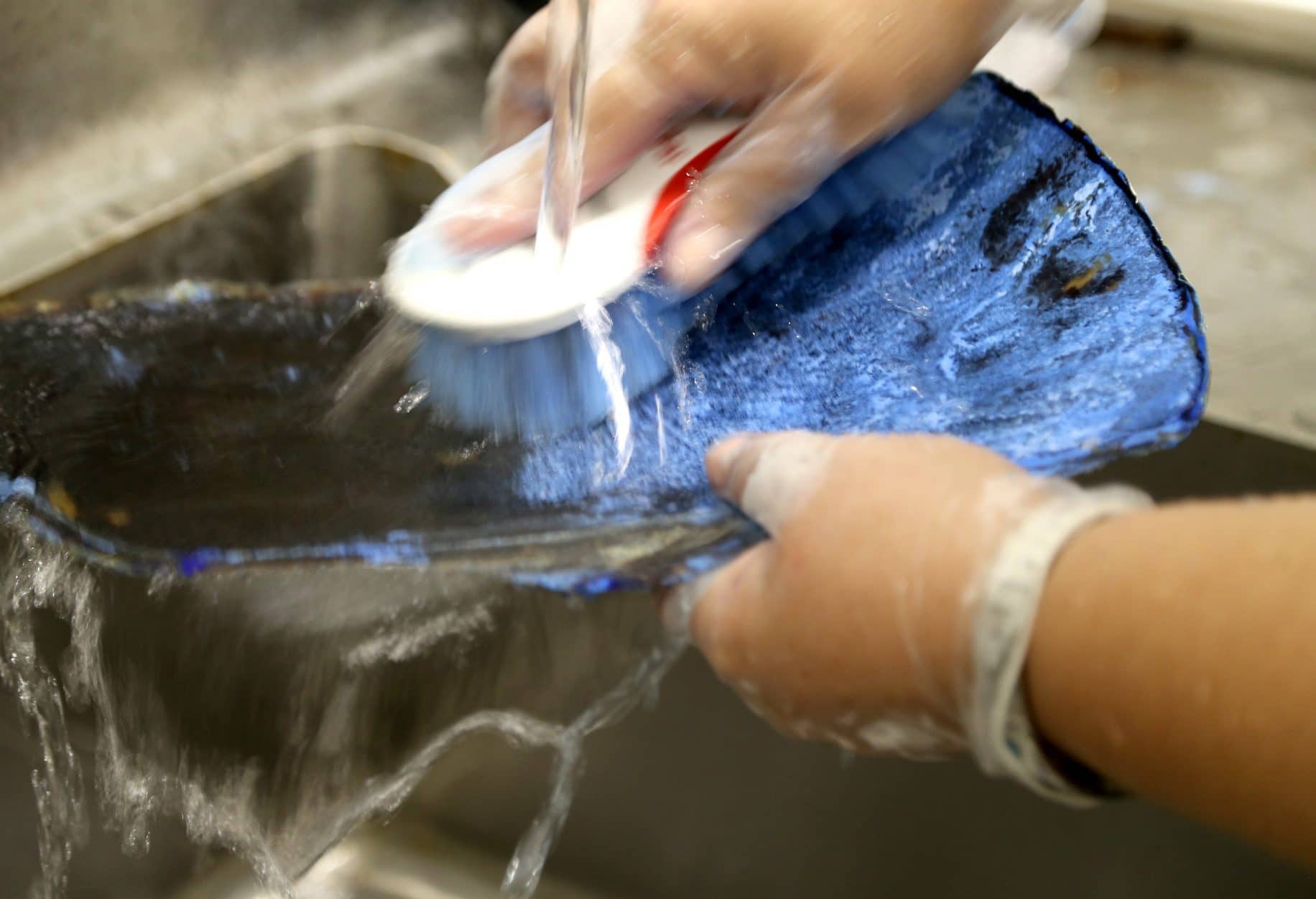 Global hawksbill populations have declined by a staggering 85% over the past 100 years and estimates suggest there are as few as 15,000 to 20,000 nesting females worldwide, a fraction of their population just a few decades ago, according to the International Union for Conservation of Nature.

In addition to the illegal trade of their shell, the species faces the same threats as other sea turtles: degradation of nesting habitats, poaching for their eggs and meat, entanglement in fishing gear and marine pollution. Conservation efforts such as protecting nesting beaches haven’t been as effective for this species because these sea turtles make fewer nests in many different beaches in their range, said Sarah Milton, professor and interim chair of Florida Atlantic University’s Biological Sciences department.

“They nest a few at a time on many little beaches, so measures to protect large areas in nesting beaches don’t work as well for hawksbills as they do for loggerheads or leatherbacks, for example,” Milton said.

The hawksbill gets its name from the shape of its curved, pointed beak. The species has been traded for centuries because of demand for tortoiseshell, which has been used since ancient times by many cultures. The ancient Greeks used shells to make lyres, while the Romans prized the hawksbill’s scutes for furniture, small decorative items and jewelry. In Louis XIV’s France the shells were widely used as thin inlays on ornate dressers, cabinets and even on entire walls at Versailles palace. Tortoiseshell is a key element of a furniture style that’s named after him.

Wide-scale trade started in the 17th century when tortoiseshell carving became popular in Japan and in Europe and trading boomed in colonial networks around the world. Until 1977, when CITES banned the international trade of hawksbill turtles among its signatories, there was no protection for these animals.

Because the species is found throughout the Caribbean Sea and western Atlantic Ocean including the Gulf of Mexico and South Florida, and from Central America to northern Brazil, Miami has become a gateway for the illegal export of these animals to Asia and Europe. The city is already a global hub in the import-export industry, and it’s the main port of entry for exotic reptiles and plants, dirty gold and smuggled songbirds, as well as shark fins.