‘Do not worry about any firefighting’: Bay Area fire crews fight to rescue people as fires spread unchecked

Southbound I-80 slows to a crawl as the fire jumps the freeway during the Lightning Complex fire on Wednesday, August 19, 2020 in Vacaville, California. (Paul Kuroda/SIPA USA/TNS)
August 23, 2020 David DeBolt - The Mercury News and Annie Sciacca - The Mercury News
Share
Tweet
Flip

Flames were chewing through a log cabin on Cherry Glen Road when Vallejo firefighter Wally Trujillo arrived. The Engine 27 crew had responded to calls to help beat back a fast-moving blaze sweeping over Mount Vaca from Napa.

It was just before midnight on Wednesday, and the LNU Lightning Complex fires had jumped Pleasants Valley Road. Calls of people trapped and desperate for help were stacking up. Trujillo knew flames were headed to his English Hills home and to his mother-in-law’s house closer to the ridge.

Over the fire radio, came the mandate: The focus was going to be on evacuations.

“Do not worry about any firefighting,” the broadcast said. Firefighter and civilian safety “were the only objective.”

The Engine 27 crew put down their fire hose and joined the scramble to evacuate homes. 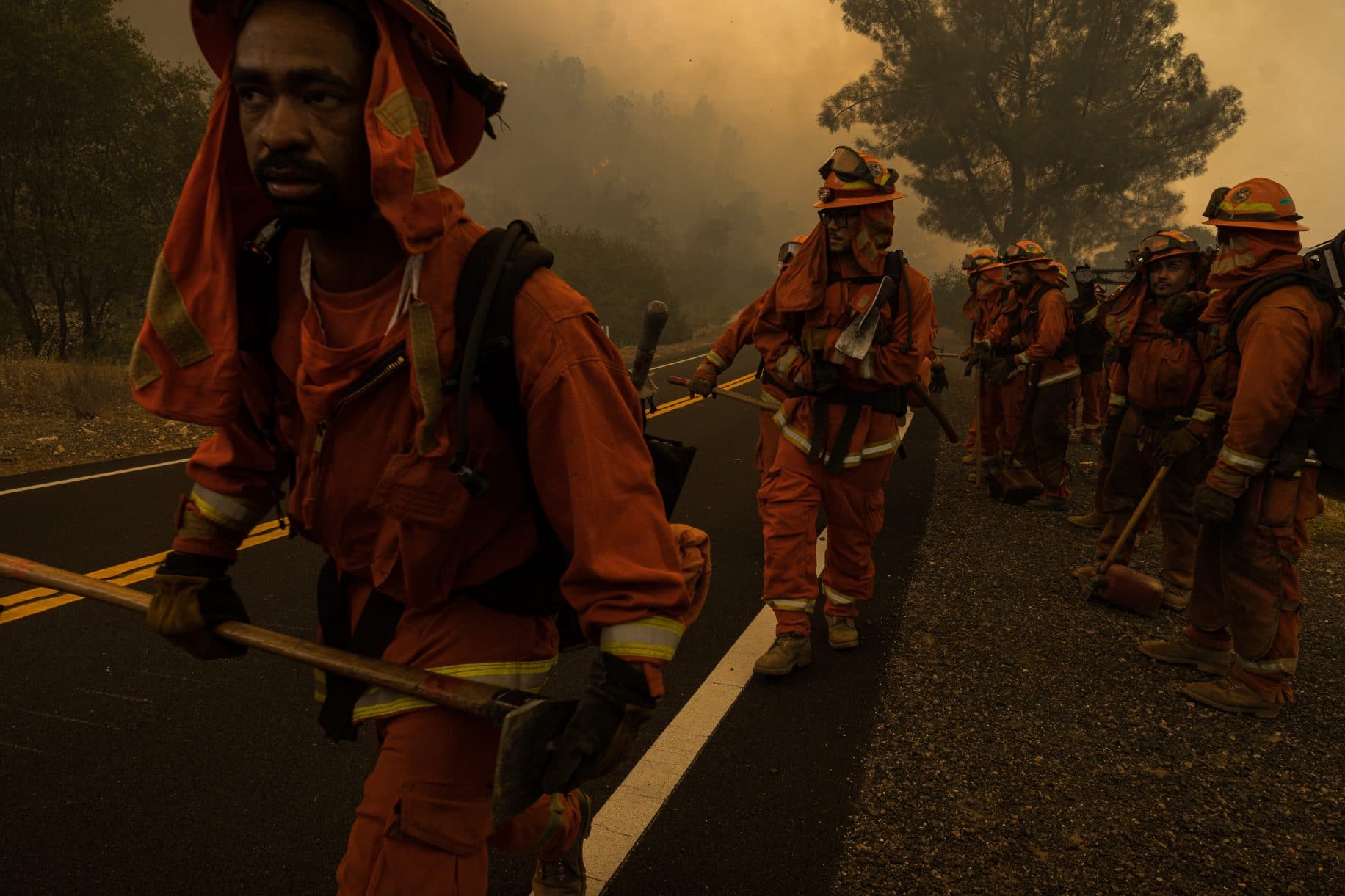 Trujillo felt helpless. “Our job is to put out fire,” he said. “It was chaos.”

The fire had ignited further north, one of 560 fires that ignited across the state this week. In the Bay Area, lightning storms and dry, hot winds have driven three massive complex fires into every county except San Francisco, forcing thousands of people to evacuate and stretching fire crews thin from Sonoma and Napa County into the Santa Cruz Mountains and Monterey.

On Tuesday, residents in Vaca Valley could see the orange glow of the largest fire — the LNU Lightning Complex — at Lake Berryessa grow closer, as multiple fires converged across the county line in Napa took fuel in brush-filled canyons. Though Vacaville lives every year under the distant threat of wildfires, a destructive fire has not hit the city since 1988.

So when Sarah Hawkins’ and her husband saw the fire creeping up the Blue Ridge, they never thought it would reach their five-acre English Hills home or their barn full of prized goats. No fires had in their 17 years living there.

Just after 1 a.m., a neighbor called to check on them and issue a warning: The fire was coming and fast. They gathered some belongings into suitcases and went outside in 98-degree heat to see if they could save anything. The fire seemed to be coming from the west. They watered down the area, hoping the flames would burn out as they traveled along the low grass. 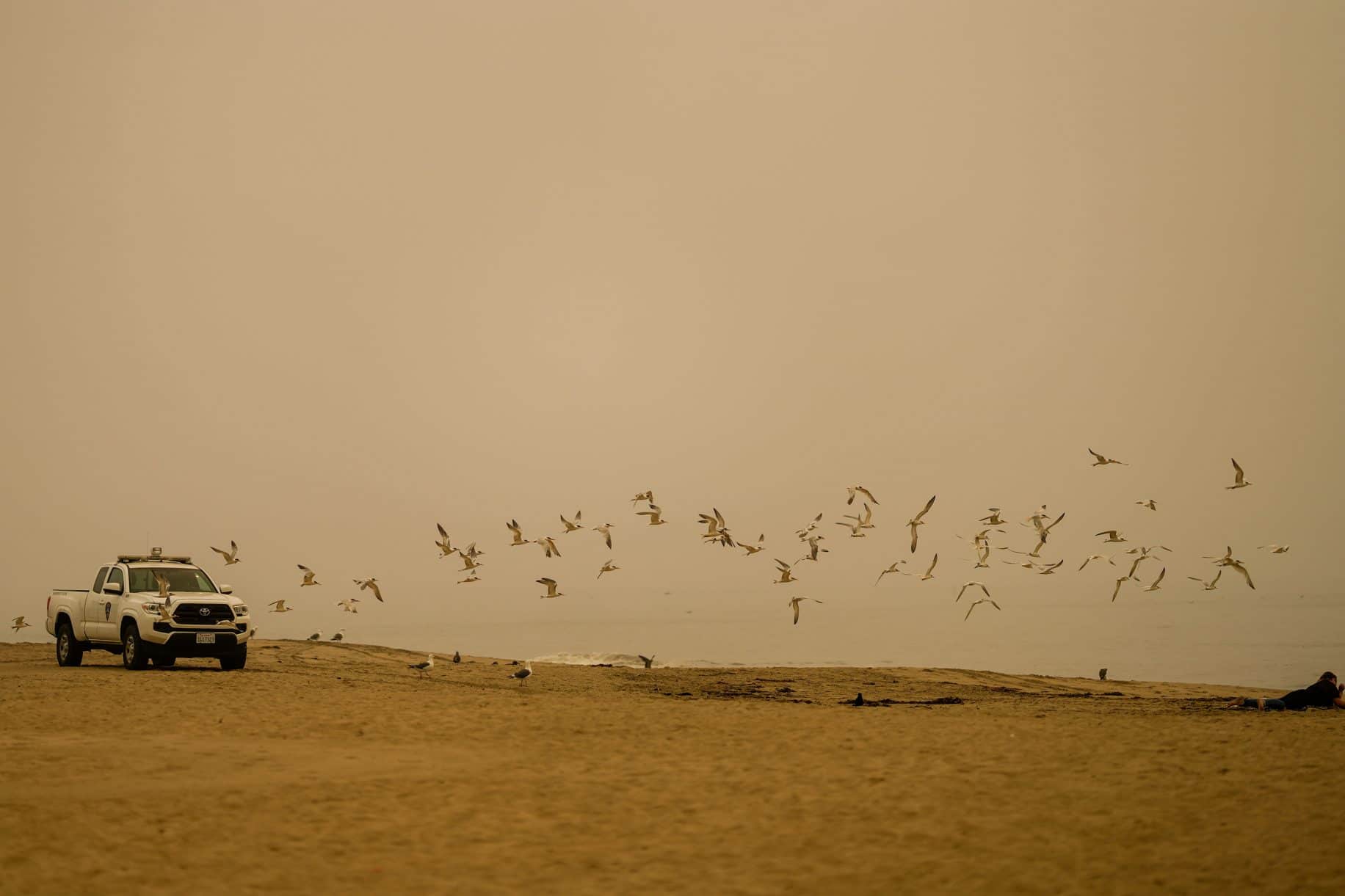 Birds take flight as smoke from the fires and a marine layer roll in slightly obscuring the view from the beach near the Santa Cruz Beach Boardwalk during the CZU August Lightning Complex fires, on Friday, Aug. 21, 2020, in Santa Cruz, California. (Kent Nishimura/Los Angeles Times/TNS)

“Then we heard this roar and it came out of the north — huge flames,” Hawkins said. The heat was so intense, bats started falling from the sky.

Only a sunken-in garage door and a chimney were left standing. The tree under which they got married was a shell. Their metal barn melted. Twenty of her goats perished, their small bodies strewn, scorched, outside the barn that held their hay. The surviving ones from her dairy herd, which won national awards, are staying with her at a friend’s house nearby.

In fact, no one was prepared for how quickly the complex fires swept into town, killing at least one and forcing others to run for their lives. As firefighters and police ran door-to-door warning people to get out, dispatch calls kept pouring in. A quadriplegic woman on Putah Creek Road needed assistance. A Carrington Lane couple was trapped, their car too hot to use. Fire around Digger Pine Road was growing out of control, with one woman telling dispatch her house was engulfed in flames. Dispatch advised one woman surrounded by fire to get in a pool of water near her home.

The blaze was moving south, in the direction of densely populated residential neighborhoods. And with hundreds of other fires burning across the state, fewer outside fire departments were available to help. 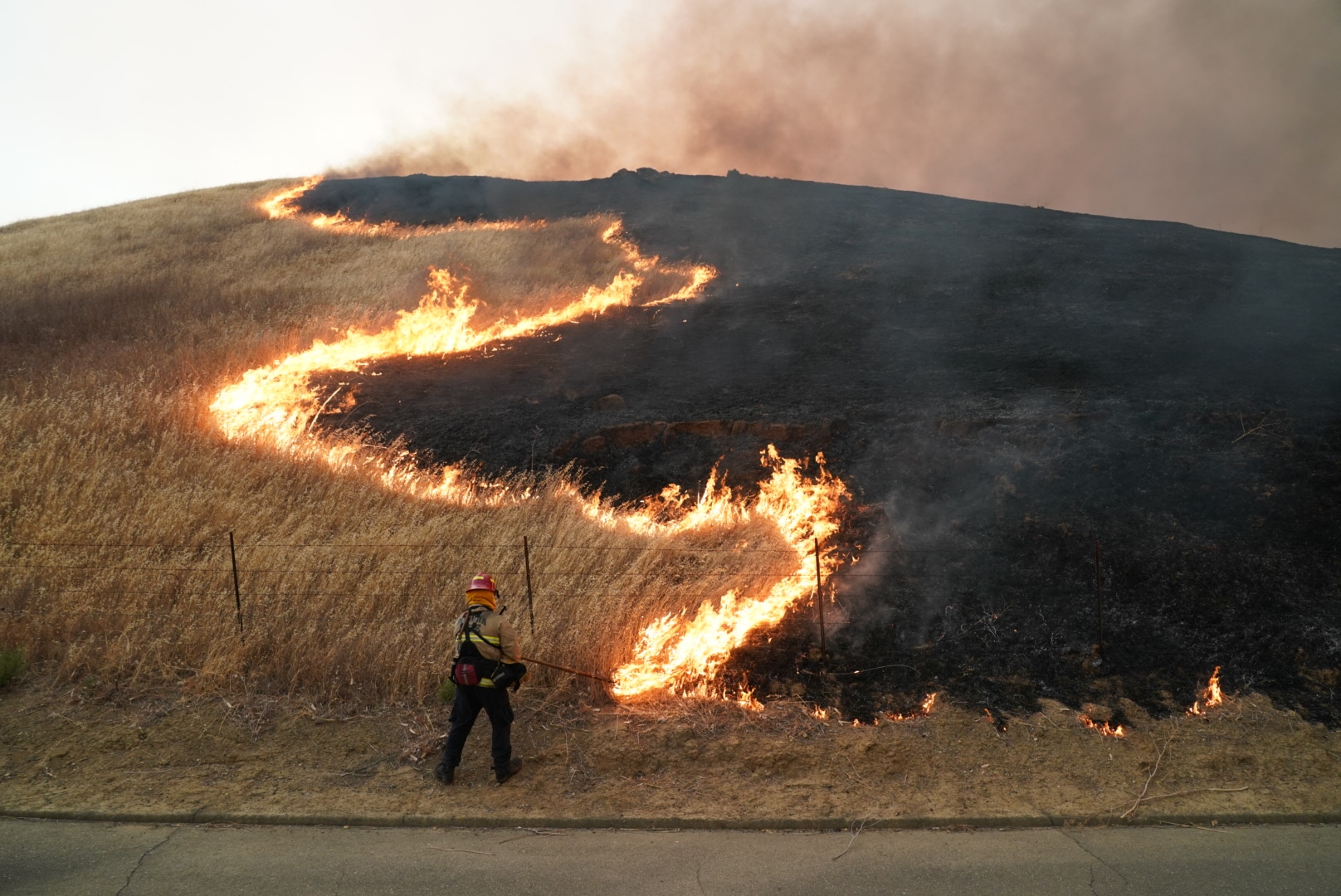 A firefighter rakes dry vegetation to the backfire during the Lightning Complex fire on Wednesday, August 19, 2020 in Vacaville, California. (Paul Kuroda/SIPA USA/TNS)

In the English Hills, the fire surrounded Sandra Over’s 10-acre property on three sides. She and her husband stayed behind to wet their house and land.

“There were two hours where we were not going to have a house by the end of the day. Just mentally preparing myself while I was hosing it down,” Over said.

“The boots on the ground are doing everything they can. There’s just not enough of them,” she said. “You could tell, that affects all of these firefighters. I can’t imagine being a firefighter and having to see a house go down that you just couldn’t save.”

On the radio, CalFire scouting the area of Peaceful Glen Road and Olivas Lane called for units to break the fire there. As it turned out, Trujillo was headed toward his property. Fire crews managed to save several homes in his cul-de-sac. An off-duty Vallejo battalion chief, who lives nearby, doused Trujillo’s propane tank with water, helping save his home.

“It was the luck of the draw for all my neighbors,” he said, although it was hard to feel lucky with all the destruction around him. Crews were unable to get to his mother-in-law’s house and several others along Pleasants Valley Road that were destroyed. One Pleasants Valley Road resident died, the sheriff’s office said Thursday.

“To see people’s beautiful homes burning to the ground. It was like a bomb went off. As a firefighter, it’s a frightening experience. But in the back of your mind you feel helpless,” he said.