A firefighter with Camp Pendleton Fire Department feeds a prescribed burn in the Juliet Training Area on Marine Corps Base Camp Pendleton, California, May 23, 2020. Firefighters with CPFD are using a series of prescribed burns to clear approximately 50 acres of dense vegetation over the Memorial Day weekend. The fires will improve the habitat for the kangaroo rat, one of 18 endangered species that lives on Camp Pendleton, and prevent wildfires during the summer fire season. (U.S. Marine Corps photo by Lance Cpl. Andrew Cortez)
August 25, 2020 Lance Cpl. Andrew Cortez - Defense Visual Information Dist
Share
Tweet
Flip

California is in the midst of a heat wave, and over 550 fires are currently burning across the state. Hundreds of square miles have been burned and more than 140,000 people are under evacuation orders.

Aboard Marine Corps Base Camp Pendleton, California, Marines are able to continue live-fire training thanks to the efforts of the base’s fire department.

Camp Pendleton Fire Department has more than 125,000 acres of land to maintain and stand watch over year-round. This year, CPFD took action to get ahead of the fire season by targeting areas most vulnerable to catch and create wildfires. These areas include dense regions of vegetation, grasslands and impact ranges.

“We are trying to be more proactive in the mission that we are trying to accomplish,” said Jeff Cunliffe-Owen, assistant fire chief and wildland coordinator with CPFD. “The Marine Corps trains 24/7, and the Marines unintentionally start fires with their training, so we do our part to control them.”

Cunliffe-Owen says CPFD likes to initiate fire prevention before the fire season starts, so the firefighters are ready for when a fire breaks out and can easily keep it contained. They performed prescribed burns to help prevent forward progression of any possible wildfires by cutting their fuel source off. They also worked with civilian agencies from the surrounding communities to clear firebreaks. 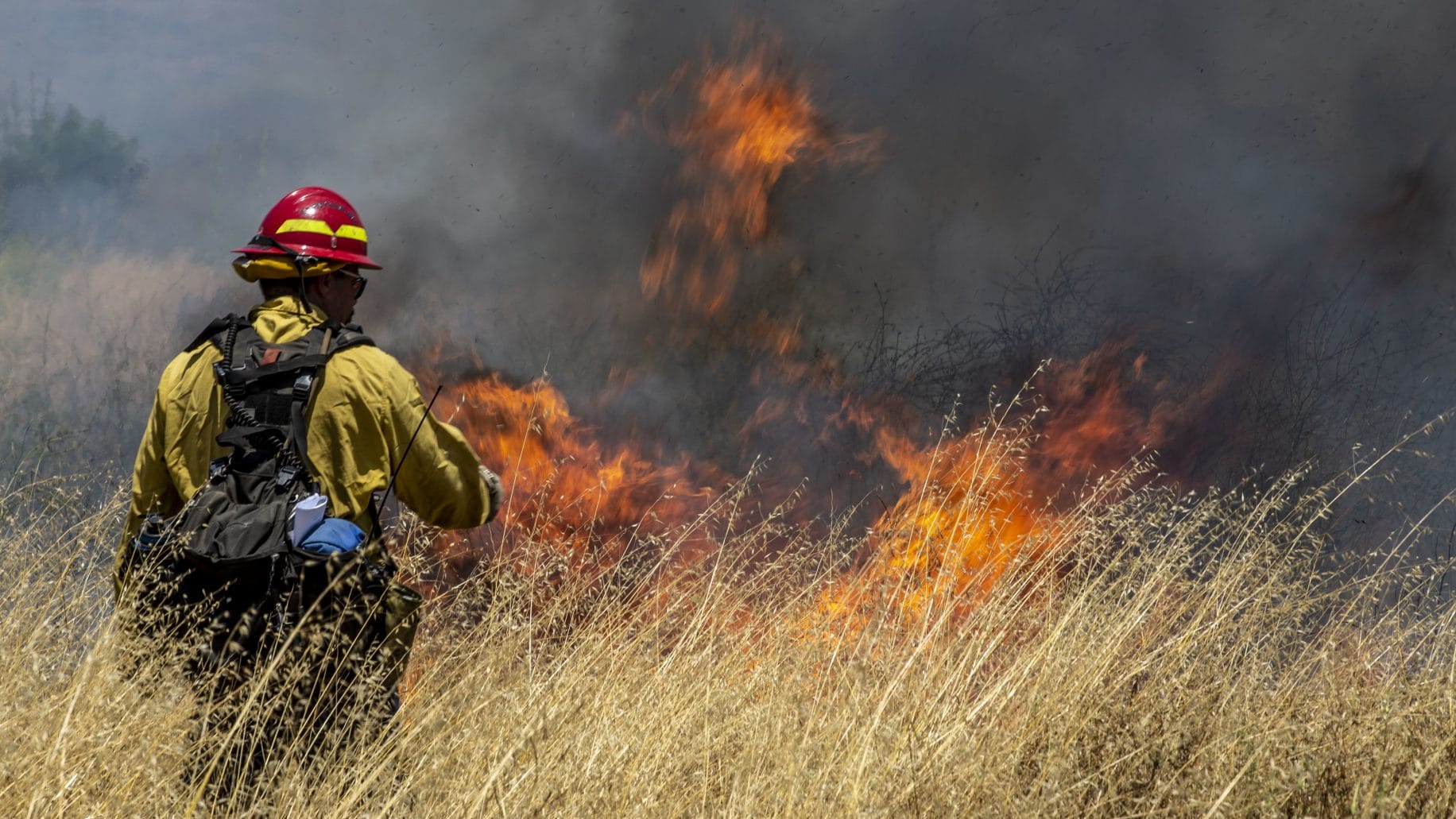 “The prescribed burns we have been doing have kept the fuel level down,” said Cunliffe-Owen. “So, if there is a major fire in those same areas, we know it won’t burn as bad because we burned the fuel beds before.”

The prescribed burns also prevent fires from going onto neighboring communities around the base.

Marines conducting live-fire training cause the majority of fires that break out on Camp Pendleton. Most of the training areas are impact areas routinely hit with munitions from small arms, aircraft and artillery. These areas are the firefighters’ main concern because they are at the highest risk to catch fire.

During this year’s rainy season, Camp Pendleton had a significant amount of rainfall. Whenever the base receives substantial rain, it causes new growth all over base. When rainfall comes, the new growth will mix with the heavy fuel that has been around for years, according to Cunliffe-Owen. The new growth, carrier fuel, burns fast and at a high temperature. The heavier fuel burns slow but at a higher temperature.

“The heat that Southern California is experiencing is at a record level, which gives the fuel another chance to dry out,” said Cunliffe-Owen. “The vegetation is already at critical levels throughout Southern California and this causes fuel to become more dried out, causing harder-to-control fires.” 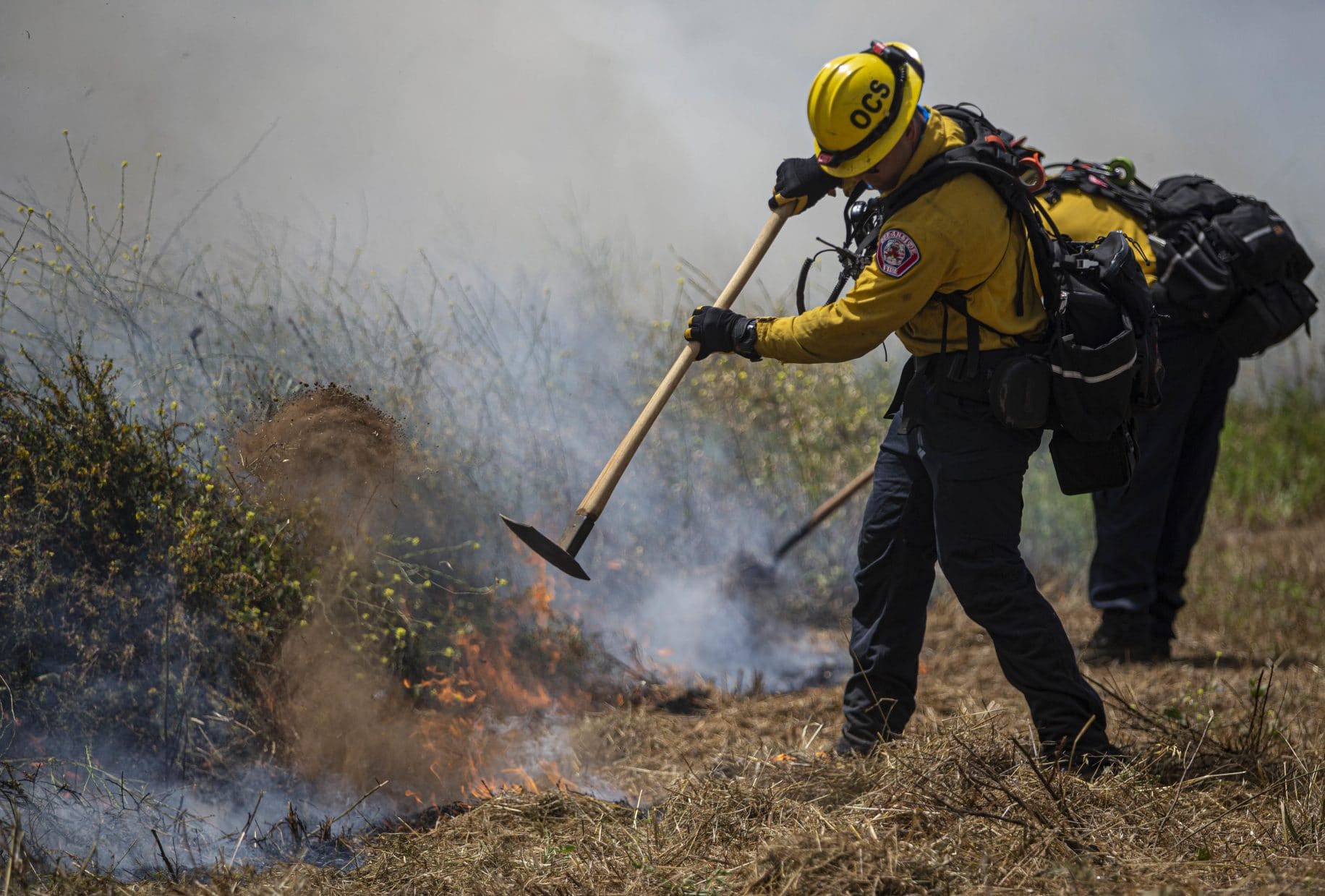 A firefighter with Camp Pendleton Fire Department creates a small break to control a prescribed burn in the Juliet Training Area on Marine Corps Base Camp Pendleton, California, May 23, 2020. Firefighters with CPFD are using a series of prescribed burns to clear approximately 50 acres of dense vegetation over the Memorial Day weekend. (U.S. Marine Corps photo by Lance Cpl. Andrew Cortez)

Camp Pendleton Fire Department also has a fire danger rating system that helps determine the types of training Marine can conduct. The system takes into account the temperature, wind, humidity and various other factors to determine the risk of a fire starting. If the danger rating gets to the highest level, it will shut down all training to prevent a serious fire.

Camp Pendleton has prevented thousands of acres from being burned every year by taking these precautions. Pendleton Marines continue to train and CPFD firefighters continue to ensure Marines stay safe while executing live-fire ranges.

This press release was originally published by the U.S. Marine Corps