“This is something that’s never happened to me before, and I never thought it would happen,” retired Marine Maj. Bill White said at his birthday celebration Friday. “I never dreamed of it, and here I am all of a sudden.” [CALIXTRO ROMIAS/THE STOCKTON RECORD/TNS]
August 10, 2020 Bob Highfill - The Record
Share
Tweet
Flip

To his sides were his daughter Mary Huston, good pal Tony Walker and Executive Director Diane Wright and the staff at the Oaks at Inglewood, where White resides. Behind him, dozens of residents took to the patio or stood on balconies.

And in front of White, cars, including a Stockton Police Department cruiser, paraded past to celebrate another milestone for the multi-decorated Marine, who fought at Iwo Jima, one of the bloodiest battles in World World II. 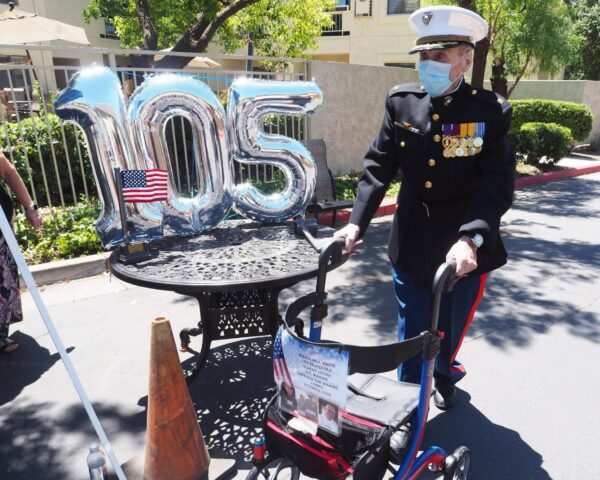 On Friday, the Oaks at Inglewood organized a masks-on, physically distanced celebration of Maj. White’s 105th birthday. In his customary humble manner, White wondered what all the fuss was about. He expressed similar sentiments earlier this year when tens of thousands of Valentine’s Day cards, letters and memorabilia from all over the world, addressed to White, flooded the Oaks at Inglewood for “Operation Valentine.”

“This is something that’s never happened to me before, and I never thought it would happen,” White said. “I never dreamed of it, and here I am all of a sudden.”

White said the Valentine’s Day cards, as well as newspaper clippings and letters, are tucked away in three-ring binders. Huston said the cards haven’t stopped coming since “Operation Valentine” and have carried over to St. Patrick’s Day and Easter and now his birthday. 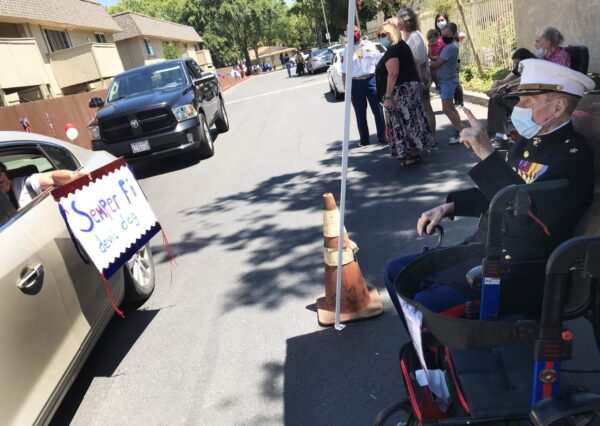 Retired Marine Maj. Bill White sits under a shady canopy at the Oaks at Inglewood as a parade of cars passed him as part of his 105th birthday celelbration. Earlier this year, White received tens of thousands of Valentine’s Day cards, letters and memorabilia from all over the world for “Operation Valentine.” [CALIXTRO ROMIAS/THE STOCKTON RECORD/TNS]

“There’s a lot of love and a lot of appreciation from people all over,” she said. “It’s very touching. I get emotional sometimes when I think of all of the response that he’s gotten.

Huston said her dad is doing well, though he’s used to more activity. The coronavirus pandemic has kept him fairly isolated, though Huston said the staff at the Oaks does a great job organizing activities for the residents.

White, who is believed to be the oldest living Marine, served on active duty for 30 years and has been retired from the Marines 55 years. He received the Purple Heart for injuries sustained from a grenade blast during the Battle of Iwo Jima. White also served during the Korean War. 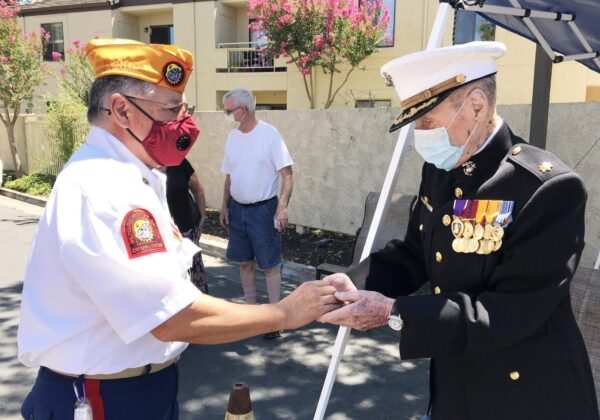 After he retired from the Marine Corps, White worked for the Huntington Beach Police Department as a reserve officer then as a full-fledged officer and eventually became a jailer. White volunteered 30 years with the Boys Scouts Explorer Post 563 that became Huntington Beach Search and Rescue.

White moved to Stockton for health reasons 15 years ago and has been a resident at The Oaks for about four years.