Ramón Galindo — World War II veteran, successful businessman, internationally known magician, and historian who captured Austin life with his camera well into his later years — died last week in his sleep in the Travis Heights home he had shared for more than six decades with his late wife, Pauline Santos Galindo. He was 99.

From fighting in the Battle of the Bulge to mesmerizing global audiences with his signature magic parakeet tricks, Galindo’s diverse interests and multiple talents led to an extraordinary career and life that attracted many to him.

“If you love stories, you’d love listening to his stories,” said Maggie Rivas-Rodriguez, founder and director of the Voces Oral History Project at the University of Texas. Galindo chronicled his time during World War II and beyond for the project. “He had the mind of an observer and he was curious about everything.” 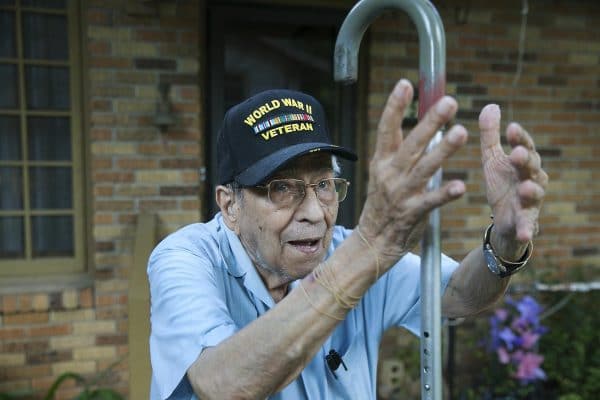 Galindo recounted in his oral history interview how he’d never forget walking into Adolf Hitler’s headquarters in the immediate aftermath of World War II as part of the U.S. Army’s 571st Anti-Aircraft Automatic Weapons Battalion. Galindo’s battalion was stationed in Hitler’s headquarters after the war.

“I didn’t realize I was sitting in a building that was going to be a big part of history,” Galindo said in his 2010 interview.

After the war, Galindo — who was born near Monterrey, Mexico, but raised in Central Austin, home to the city’s fledgling Mexican American community at the time — launched Ace Custom Tailors downtown. Over the years, Galindo’s clientele included a young Texas congressman named Lyndon B. Johnson as well as blues guitarist Jimmie Vaughan. 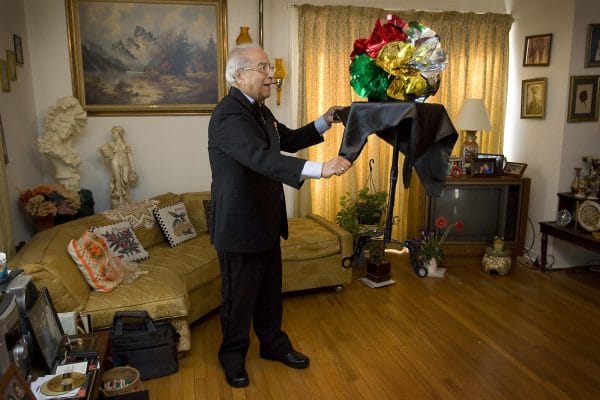 Ramon Galindo was a pioneer Austin magician, historian, documentarian and master tailor. He was honored by the Texas Association of Magicians for his 60 years of dedication. [RALPH BARRERA/AMERICAN-STATESMAN/TNS]

From Galindo’s tailor shop, he also set up a studio to produce and edit films. He captured Austin’s changing neighborhoods, businesses and people in hundreds of hours of footage. He eventually became a valued resource at the Austin History Center.

Galindo made his own history blazing a trail as a Latino magician after retirement.

“He breathed magic,” said his daughter, Josie Galindo Caballero. “It was everything to him.”

She remembers growing up wondering why every kid wanted to come to her birthday parties. Guests would often offer her candies and other treats hoping she’d reveal her father’s magic tricks. 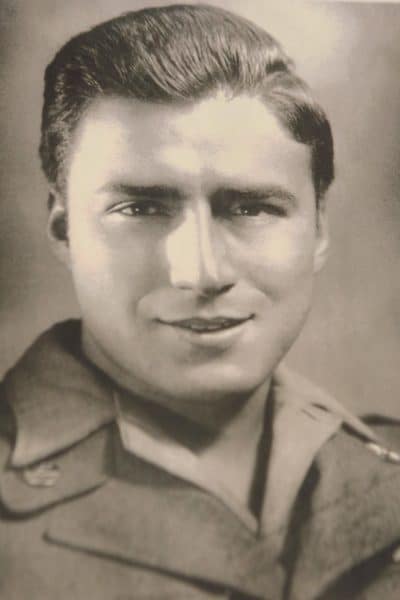 Ramon Galindo served in World War II as a young man. Over the decades, he remained in touch with his military friends. [MARLON SORTO/AMERICAN-STATESMAN/TNS)

Galindo later traveled around the globe to give his magic performances and belonged to the Texas Association of Magicians.

In 1961, Hurricane Carla slammed into the Texas Gulf Coast, sending evacuees to what was then Austin’s City Coliseum. Galindo Caballero remembers her father taking her as a young girl to the coliseum as he performed magic for all the children whose lives had been turned upside down.

She became his magic assistant, and later a magic coach to her son who inherited his grandfather’s fascination for the art.

“(My father) had so many projects going on,” she said. “He didn’t have time to do everything he wanted.”

Without a formal education beyond the seventh grade, he was mostly self-taught.

“He had the instinct,” Galindo Caballero said. “He believed in himself. He didn’t want to be a tailor; he wanted to be a master tailor.”

Galindo’s generation endured the Great Depression, a world war, and when they came back from the war, Rivas-Rodriguez said, they faced more challenges. Overcoming these obstacles gave them the nickname the Greatest Generation.

“Our young people now, they are going through some tough things,” she said. “I hope they can look at that generation and people like Mr. Galindo, who was also young when he went through (many hardships) and see how they worked things out and how that generation made this a better place.”

Funeral services for Galindo will be held 10 a.m. Friday at Cook-Walden Capital Parks Funeral Home in Pflugerville. A livestream of the funeral will be available for those who can’t attend. Guests can log onto https://vimeo.com/435347292 to view the service.