Cecily Aguilar, the 22-year-old Killeen girlfriend of a Fort Hood soldier accused of killing Army Spc. Vanessa Guillen, was denied bail Tuesday after pleading not guilty to all three felony counts against her.

Aguilar appeared virtually before U.S. Magistrate Judge Jeffrey Manske during a preliminary hearing in Waco on Tuesday. Aguilar, dressed in a striped jumpsuit and orange face mask, maintained her innocence while in federal court.

“She clearly and unequivocally denies the accusations made against her by the government,” said Lewis Gainor, a federal public defender who represents Aguilar. “It is supported by probable cause, which is the bare minimum for a case to go forward. At this point, she is presumed to be innocent. She has a right to a trial.” 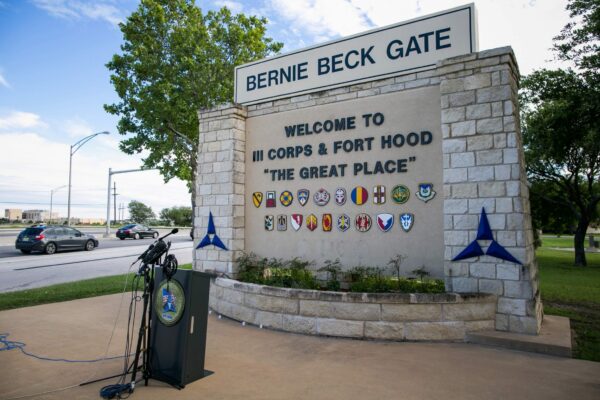 Aguilar was charged with three counts of conspiracy to tamper with evidence after Guillen’s body was discovered near the Leon River in Bell County late last month.

Authorities have accused Aguilar of helping her boyfriend, Army Spc. Aaron David Robinson, dismember and dispose of Guillen’s body after they said Robinson killed her inside an armory room at the post on April 22.

Robinson shot himself and died in the early morning of July 1 as local authorities confronted him about Guillen’s death, officials have said.

U.S. Attorney Mark Frazier during Tuesday’s hearing alleged that Aguilar not only helped Robinson dispose of Guillen’s remains, she also deleted Google accounts belonging to her and Robinson as a way to get rid of evidence.

Aguilar also called one person from jail, who was not identified in court, and asked them to delete her Facebook page, Frazier said.

A crowd of protesters gathered outside the Waco courthouse on Tuesday morning, chanting “Justice for Vanessa!” as the Guillen family walked into the building at around 11 a.m. to attend the hearing.

Keon Aguilar, a former Fort Hood soldier and the estranged husband of Cecily Aguilar, was also present in court on Tuesday. Keon Aguilar was there to support his wife, according to Gainor.

“They were estranged, but he has not left her side,” Gainor said. “He supports her and he is here for her and would take her in if she were released.”

However, Manske denied Aguilar bail on Tuesday. The judge said Aguilar would not be released because she had previously made comments about attempting to leave the country.

The judge on Tuesday did not schedule Aguilar’s next court appearance.

Natalie Khawam, the Guillen family’s attorney, told the American-Statesman on Tuesday that the family will meet with President Donald Trump on July 29 to discuss the case.

On July 30, Khawam plans to hold a news conference in Washington, D.C., to release a draft of the #IAMVANESSAGUILLEN bill to Congress. The bill, if signed into law, would allow for a third-party to investigate sexual harassment and sexual assault claims by U.S. service members.