Remains of the Christopher Columbus statue near Little Italy =after it was ripped from its pedestal and dragged into the Jones Falls by protesters on July 4, 2020. (Karl Merton Ferron/Baltimore Sun/TNS)
July 05, 2020 Colin Campbell - The Baltimore Sun
Share
Tweet
Flip

A crowd of protesters yanked down the Christopher Columbus statue near Little Italy and tossed it into Baltimore’s Inner Harbor as fireworks went off around the city on the evening of the Fourth of July.

The group shouted as they pulled down the monument with ropes and rolled it with a splash into the water. Dedicated in 1984, the statue is the latest monument in the U.S. to fall during the national reckoning over racism and police violence that also has toppled statues of Confederate figures and enslavers around the country.

The debate drew renewed attention to Baltimore’s Christopher Columbus memorials — including one in Herring Run Park believed to be the oldest in the country. The legacy of the famous 15th-century Italian explorer, who had long been credited by history textbooks as a hero who discovered America, has come under fire over his violent enslavement of native people. 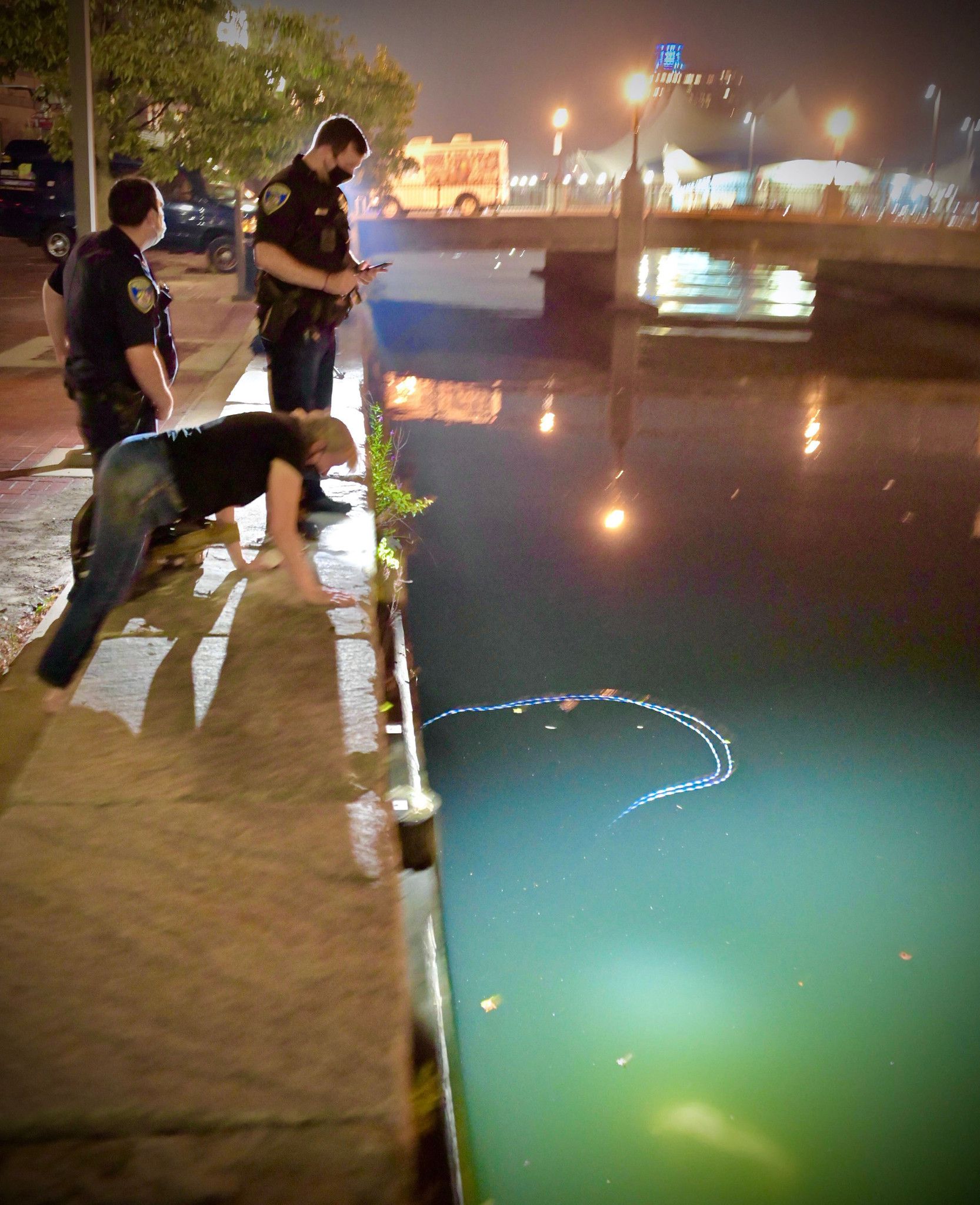 Baltimore Police look at the submerged statue of Christopher Columbus, dragged by protesters into the southern end of the Jones Falls which drains into Baltimore’s Inner Harbor. (Karl Merton Ferron/Baltimore Sun/TNS)

Carved in Italian Carrara marble, the toppled statue was owned by the city and dedicated on Oct. 8, 1984, by former Mayor William Donald Schaefer and President Ronald Reagan.

The statue showed Columbus facing east along Eastern Avenue into the rising sun, the direction from which his boats arrived in the New World. A wreath-laying ceremony has long been held in Columbus Piazza, the area around the statue, before the annual Columbus Day Parade, which was replaced by a new Italian Heritage Festival in 2019. 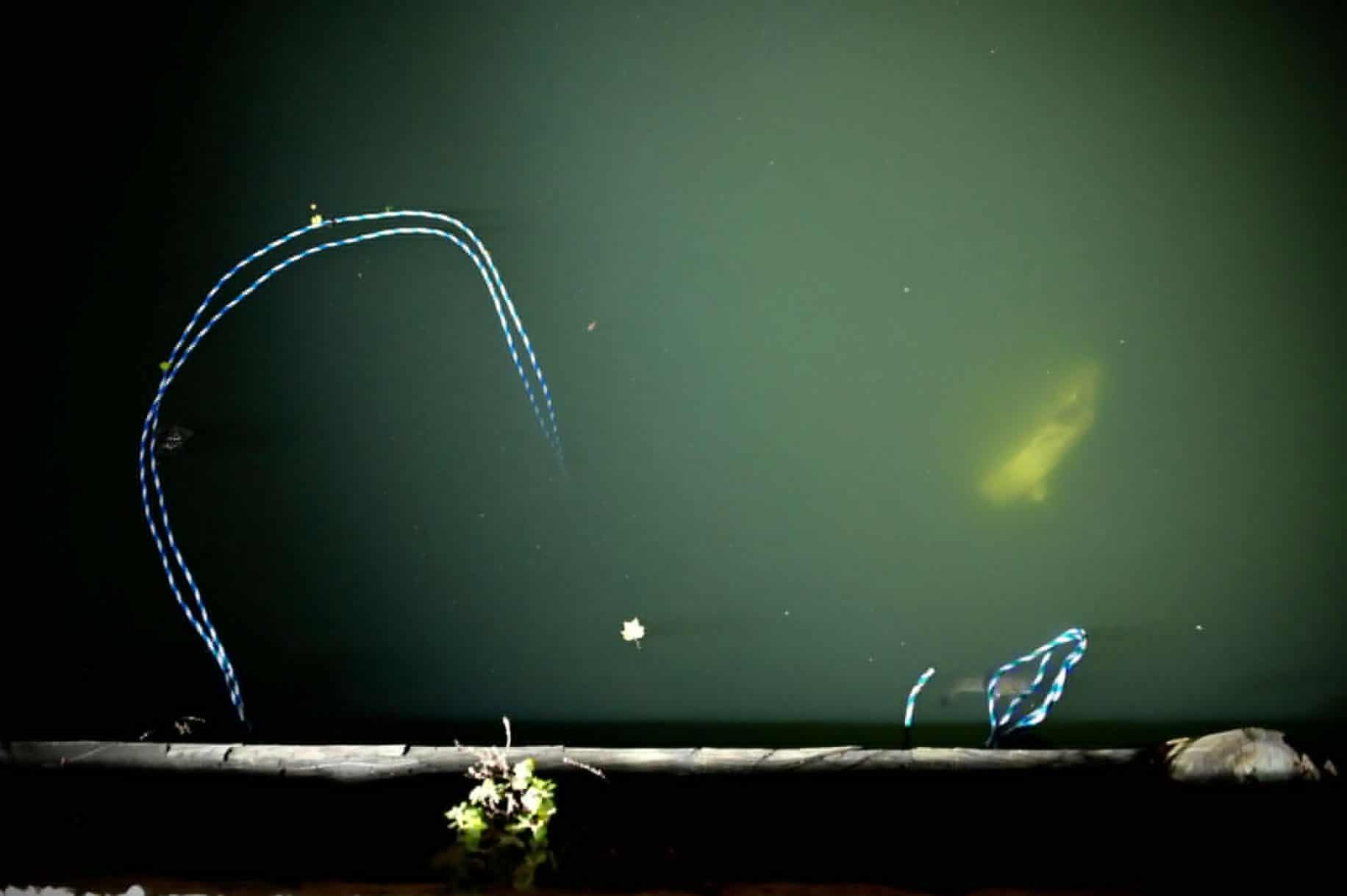 What appears to be part of the statue of Christopher Columbus is submerged in the Jones Falls tributary to Baltimore’s Inner Harbor after it was apparently dragged by rope from its pedestal on July 4, 2020. (Karl Merton Ferron/Baltimore Sun/TNS)

Republican state delegates and Italian-American activists held a press conference at the statue last month to ask Gov. Larry Hogan and Baltimore Mayor Bernard C. “Jack” Young to preserve and protect the memorials, following activists’ comments about pulling down the monuments themselves and the introduction of a City Council bill this week to rename one of them in honor of victims of police violence.

The downed statue is one of three monuments to Columbus in Baltimore. 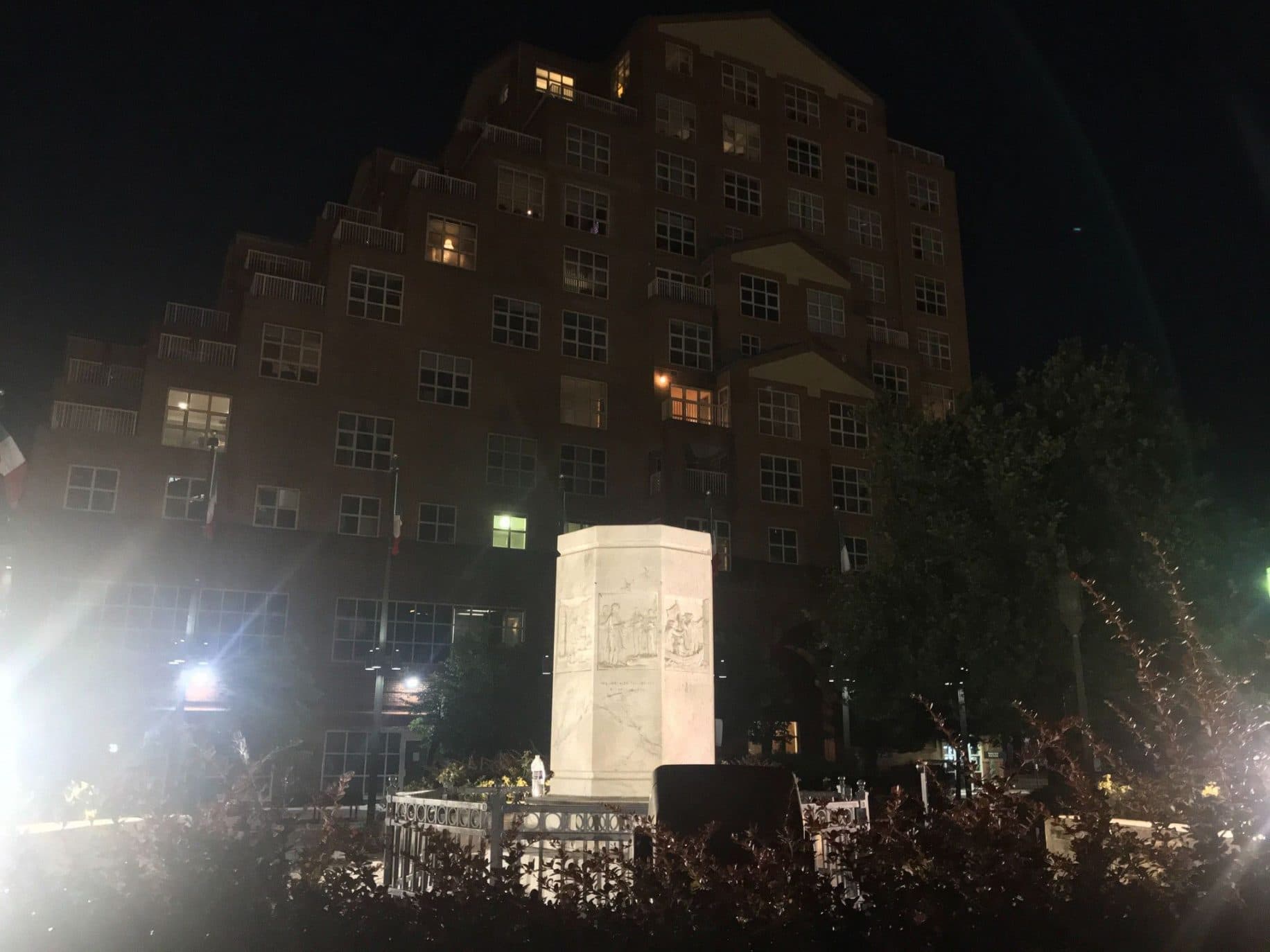 Remains of the Christopher Columbus statue near Little Italy =after it was ripped from its pedestal and dragged into the Jones Falls by protesters on July 4, 2020. (Karl Merton Ferron/Baltimore Sun/TNS)

A 44-foot obelisk dedicated to Columbus in Northeast Baltimore’s Herring Run Park — erected in 1792 to honor the 300th anniversary of his journey from Europe — is believed to be the first monument in the country to honor him. Another statue of the explorer stands in Druid Hill Park.

Baltimore City Councilman Ryan Dorsey, a Democrat, has sought to rename the 228-year-old monument in Herring Run Park since 2017, when a video circulated of a man taking a sledgehammer to its base. Dorsey surveyed neighbors at the time to gather input on how the monument could be renamed to better represent “current-day values.”

His bill, which has not yet received a hearing before the council, would rename the obelisk as the Police Violence Victims Monument.

The debate over the presence of the monuments follows renewed nationwide protests decrying systemic racism and police violence against Black people, prompted by the killing of George Floyd in Minnesota, who died last month after an officer knelt on his neck for nearly 9 minutes.