U.S. Attorney General William Barr testifies during a House Judiciary Committee hearing on Capitol Hill on Tuesday, July 28, 2020 in Washington, D.C. In his first congressional testimony in more than a year, Barr faced questions from the committee about his deployment of federal law enforcement agents to Portland, Oregon, and other cities in response to Black Lives Matter protests; his role in using federal agents to violently clear protesters from Lafayette Square near the White House last month before a photo opportunity for President Donald Trump in front of a church; his intervention in court cases involving Trump's allies Roger Stone and Michael Flynn; and other issues. (Chip Somodevilla/Pool/Abaca Press/TNS)
July 30, 2020 Anna Spoerre - The Kansas City Star
Share
Tweet
Flip

In the past week, more than 50 arrests have been made as part of Operation LeGend, the U.S. attorney’s office claimed Tuesday evening of the federal operation focused on reducing and solving homicides in Kansas City.

“For those keeping score at home … federal agents and their local law enforcement partners in #OperationLeGendKC made 50+ arrests this past week. They seized 15 guns, heroin, meth, marijuana, pills,” the U.S. Attorney’s Office for the Western District of Missouri tweeted.

The office’s tweets came hours after Attorney General William Barr confirmed he “misspoke” last week when he announced more than 200 arrests had been made through the operation. Justice Department officials later clarified that a large majority of those arrests occurred under a program that started in the 2019, called Operation Relentless Pursuit. 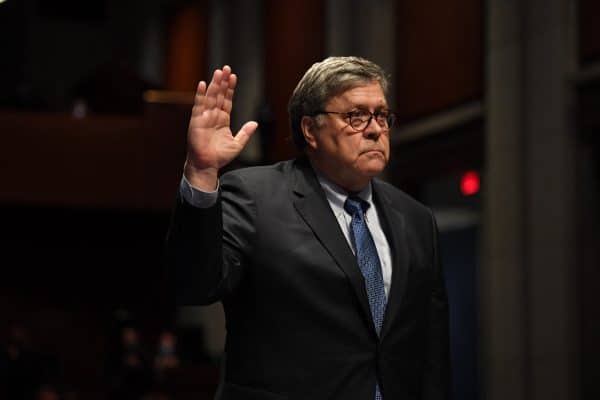 The operation bringing more than 225 additional federal agents to the metro region is named after 4-year-old LeGend Taliferro, who was fatally shot while sleeping last month. The operation, announced earlier this month by Barr, is intended to curb violent crime as 2020 is on track to be the most violent in the city’s history.

Operation LeGend was later expanded to Chicago and Albuquerque. On Wednesday the Department of Justice announced further expansion to Cleveland, Detroit and Milwaukee.

“By the time you read this, the number of arrests will be even higher,” the Tuesday tweets said in regards to Kansas City. “We’ll issue a more detailed report on those statistics in a few days, but we knew some of you were getting impatient.”

The Department of Justice has released information on at least five of the arrests made, at least two of which were related to homicides. The U.S. Attorney’s Office tweets said not every arrest will make the news.

“Sometimes, law enforcement officers pursue justice outside the spotlight’s glare and away from the TV cameras. Just because it’s the right thing to do,” they continued.

The second known murder charge connected with Operation LeGend was filed Tuesday. Antoine Cotton, 42, was charged with second-degree murder in the June beating of a man found dead in the middle of a street in northeast Kansas City, according to court records.

The first charges linked to the operation were announced July 21 after Monty W. Ray, 20, was charged in federal court with being an unlawful drug user in possession of firearms. The announcement further fueled the debate among community leaders as some decried the presence of federal law enforcement.