On a visit to Miami on Friday, President Donald Trump portrayed himself as tough on drugs and a champion of Venezuelans, at a time when U.S. policy toward the troubled South American nation has not yielded the expected results and polls show him falling behind his Democratic rival in Florida.

“We are going to be fighting for Venezuelans,” Trump said during a roundtable discussion at the U.S. Southern Command headquarters in Doral in the afternoon. “Cuba and Venezuela, we have it very much under control.” 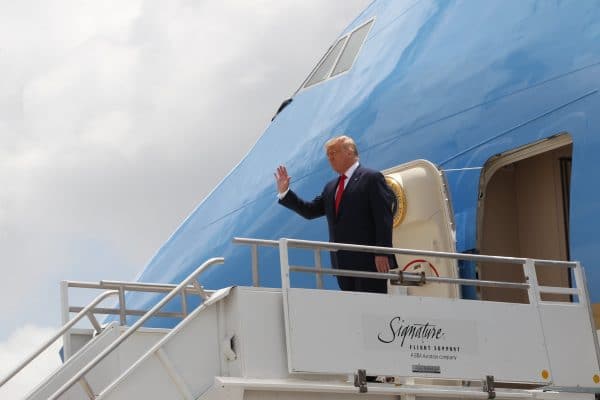 U.S President Donald J. Trump on board of the Air Force One arrives to Miami International Airport for a visit to the U.S. Southern Command and a meeting with the Venezuelan exile community in Doral. on Friday, July 10, 2020. (Pedro Portal/Miami Herald/TNS)

“This operation has been incredibly successful,” he said during brief remarks in which he referred to the “beautiful equipment” sent to the Caribbean region.

The increase in U.S. military presence in ships, planes and security forces operating in the Caribbean and the Eastern Pacific has shown significant results, said the head of Southcom, Navy Adm. Craig Faller.

Faller said the operation has disrupted 122 metric tons of cocaine heading to the U.S. and more than 18,000 pounds of marijuana.

On display at the center of Southcom’s theater room was what a media officer said was a million dollar’s worth of cocaine.

The military operation is aimed at fighting drug cartels that want to take advantage of the coronavirus crisis, but also to deny funds going to the Nicolas Maduro regime in Venezuela, O’Brien said.

“For years, Venezuela has flooded the U.S. with cocaine,” he said, adding that the administration would continue its “maximum pressure campaign” against Maduro.

O’Brien also used his time at the roundtable to highlight Trump’s “commitment” to the Venezuelan people.

“He asks almost every day how things are going in Venezuela,” the senior official said. “For the people in Venezuela, the president continues to stand with you” and interim Venezuelan President Juan Guaido.

The president arrived at Doral, the home of a large Venezuelan community, at a critical moment for his Latin American policy. Despite efforts by the Venezuelan opposition, led by Guaido, who has the support of the United States and almost 60 countries, Maduro remains in power with the aid of Cuba, Russia, and more recently, Iran.

Neither a flurry of sanctions against both Venezuela and Cuba, nor a diplomatic proposal for a peaceful transition presented by the State Department, has persuaded Maduro and his close allies to leave power. And despite the harsh rhetoric, the administration has made it clear it has no appetite for another military adventure.

But even during this impasse, many Venezuelans who have supported Trump for voiced their discontent when he recently left open the possibility of a meeting with Maduro. Trump later said he would only meet with the Venezuelan ruler to discuss his departure from power.