President Donald Trump wore a mask during a scheduled visit to the Walter Reed National Military Medical Center, a rare instance of doing so publicly as coronavirus cases continue to pile up.

Trump on Saturday was photographed with a dark-colored mask, walking in the halls of the hospital in Maryland, where he was set to meet with combat veterans and healthcare workers who’ve been on the front lines of the pandemic.

The event was the first public photo opportunity in which Trump has appeared with a mask on since the beginning of the outbreak. 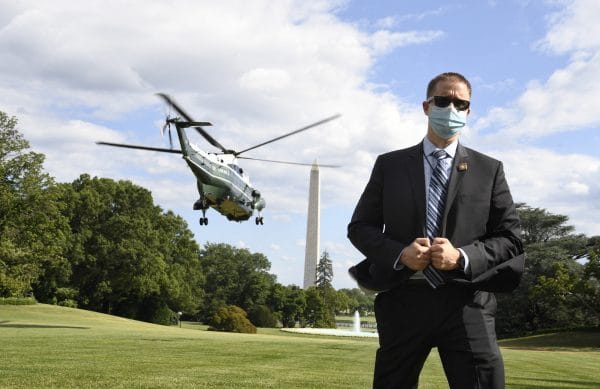 A U.S. Secret Service agent, wearing a mask to protect against COVID-19, stands on the South Lawn as Marine One lifts off with President Donald Trump, departing the White House for a visit to Walter Reed National Military Medical Center in Bethesda, Maryland, on Saturday, July 11, 2020. (Mike Theiler/Polaris/Pool/Abaca Press/TNS)

An image of a masked Trump surfaced during his visit to a Ford Motor Co. factory in Michigan in May. The president didn’t wear the mask during the public portion of the visit to the plant, which was making ventilators, masks and other medical supplies, saying he didn’t “want to give the press the pleasure of seeing” him in the face covering.

Trump has not worn a mask in public, despite official guidelines from the Centers for Disease Control and Prevention and members of the White House coronavirus task force, including Drs. Anthony Fauci and Deborah Birx.

Trump hinted that he was planning to wear a mask during his visit in an interview with Fox News on Thursday.

“I expect to be wearing a mask when I go into Walter Reed. You’re in a hospital setting, I think it’s a very appropriate thing,” Trump told host Sean Hannity. “It’s fine to wear a mask if it makes you feel comfortable.”

Trump’s remarks were in contrast with others he’s made on face coverings during the pandemic. Surveys have shown mask wearing has become a topic of partisan debate.

Trump held a rally in June at an indoor arena in Tulsa, Oklahoma, where masks weren’t required. An outdoor rally in New Hampshire on Saturday, where mask wearing was to have been encouraged, was postponed because of what the White House said was a tropical storm in the vicinity.

Trump appeared to warm up to the idea of wearing a mask in recent weeks. He told Fox Business Network on July 1 that “I’m all for masks, I think masks are good” but added that “I don’t know if you need mandatory.”