Some had been burned.

Aluminum poles that had held them lay nearby, bent and charred.

A few smaller flags mounted on sticks were found stuffed in a storm drain. 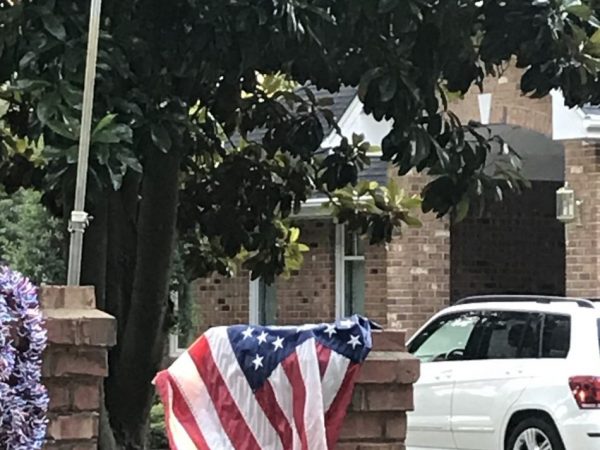 A flag that had been flying in front of a home in Virginia Beach’s Little Neck area was found ripped from its pole on July 5, 2020. Several other flags in the neighborhood were also damaged.
(Sue Bettis/TNS)

Virginia Beach police said they received multiple reports of flags being burned or tampered with over the holiday weekend, although they didn’t specify where. The city’s fire department is investigating three flag burning incidents, two on a residential street at the Oceanfront, and one on Little Creek Road, spokesman Art Kohn said.

It is generally legal to burn flags in protest. According to the American Civil Liberties Union, the U.S. Supreme Court has repeatedly affirmed it is included in the U.S. Constitution’s protection of speech.

It is not, however, legal to damage a flag owned by another person. Such vandalism is a misdemeanor, punishable by up to a year in jail and a $2,500 fine, officials said.

Some of the recent Virginia Beach flag burnings were captured by doorbell video cameras. State Sen. Jen Kiggans, who lives in one of the affected neighborhoods, said she’s seen three videos.

In one that has circulated online, a man can be seen grabbing a flag and pole hanging from a house at the Oceanfront, placing it on the sidewalk, and then trying to set it on fire. He also appears to record the incident with his phone.

Charlotte Purkey, of Little Neck, said she discovered her flag “burnt to a crisp.” The grass around it also was scorched.

“There was nothing left but a charred pole and some burnt debris,” she said.

Most of the damaged flags in Little Neck area had been supplied by a local Boy Scouts troop.

The 3-by-5 foot cotton and polyester flags were mounted to 8-foot aluminum conduit poles and placed in yards as part of an annual fundraiser, said Brian Kaneta, an assistant Scout Master with Troop 419. The scouts put them out for holidays like the Fourth of July, Memorial Day, Labor Day and Veterans’ Day and then later remove them, he said.

Four of the Scout flags were burned, two were ripped and one is missing, Kaneta said. The group replaced all of them by that afternoon.

Kiggans said she noticed some of the destruction as she left shortly after dawn that morning to drive her son to the Naval Academy. Later, her phone began lighting up with texts and photos from neighbors who had suffered damage.

Like Kiggans, many of her neighbors are active duty or retired members of the military who take pride in displaying the flag at their homes. Some also decorated their curbside mailbox posts with things like streamers and stars that were found torn and burned in the street.

“I’m just really disappointed,” said Sue Bettis, who was among those who had her flag torn down from her yard in Little Neck. “There were just streets and streets of destruction.”