Neil Armstrong became the first human to set foot on the surface of the moon, taking “one small step for man” and “one giant leap for mankind” 51 years ago today.

On July 16, 1969, the crew of the Apollo 11 moon mission launched from the Kennedy Space Center at Cape Canaveral, Fla. aboard a Saturn V rocket. The mission, fated to be the first to bring humans to the surface of the moon, took four days to reach the lunar surface.

Leading up to Apollo 11, the Apollo 8 mission saw the first manned mission to enter the moon’s orbit. The National Aeronautics and Space Administration (NASA) noted in a history of its Apollo missions that Apollo 8 launched just seven months before the Apollo 11 mission.

The U.S. performed another manned mission of the lunar orbit in May 1969 with the Apollo 10 mission.

The rapid series of space launches before the Apollo 11 mission came as the U.S. raced to meet the goal of placing a man on the moon before the end of the decade. On September 12, 1962, then-President John F. Kennedy called for the U.S. to “choose to go to the moon in this decade.”

After entering the Moon’s orbit, mission commander Neil Armstrong and lunar module pilot Edwin “Buzz” Aldrin Jr. landed on the moon in the lander Eagle, while command module pilot Michael Collins piloted maintained the command module Columbia in its orbit around the moon.

Armstrong and Aldrin improvised the landing, manually piloting Eagle to avoid boulders littering their planned landing site on the moon’s Sea of Tranquility. At 4:17 p.m EDT, the astronauts landed the Eagle with just 30 seconds of fuel to spare.

As Armstrong set foot on the moon, he uttered his famous line, “That’s one small step for man, one giant leap for mankind.”

Upon landing on the moon, Armstrong and Aldrin planted an American flag and a patch honoring the crew of the Apollo 1 mission which ended in tragedy on the launch pad two years before in 1967.

The two Apollo 11 astronauts also placed a plaque on one of Eagle’s legs, reading “Here men from the planet Earth first set foot upon the moon. July 1969 A.D. We came in peace for all mankind.” 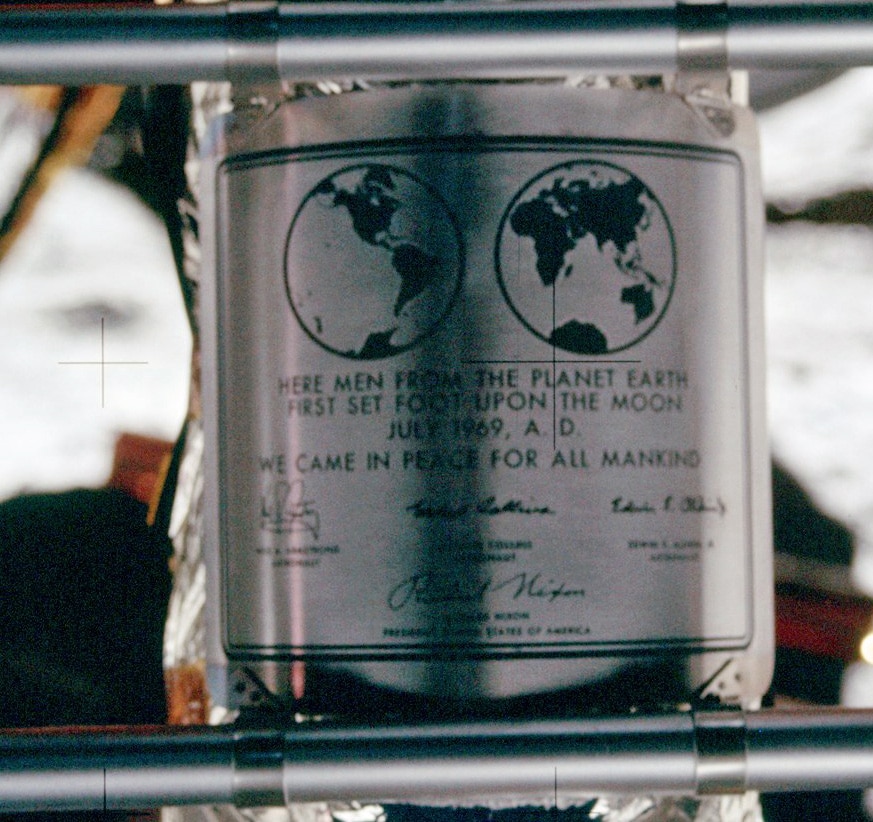 Armstrong and Aldrin launched off the lunar surface and rejoined the command module. On July 24, 1969, the crew re-entered Earth’s atmosphere and splashed down off the coast of Hawaii.

The U.S. has begun developing the vehicles needed to return manned missions to the moon by 2024 with the Artemis program. The name Artemis is a reference to the Greek god Apollo’s twin sister, with the inherent suggestion that the Artemis moon missions are a spiritual successor to the Apollo missions.