The Navy commissioned its newest amphibious assault ship on Wednesday, July 15, one designed to better deploy Marines and their aircraft from the ocean.

While the USS Tripoli, still at its shipyard in Pascagoula, Miss., was celebrated, fire-fighting crews at the Naval Base San Diego continued to work to extinguish a blaze on the amphibious assault ship USS Bonhomme Richard, which was undergoing a conversion to also make it better suited to for transporting the Marine’s F-35 Lightning II fighter plane. 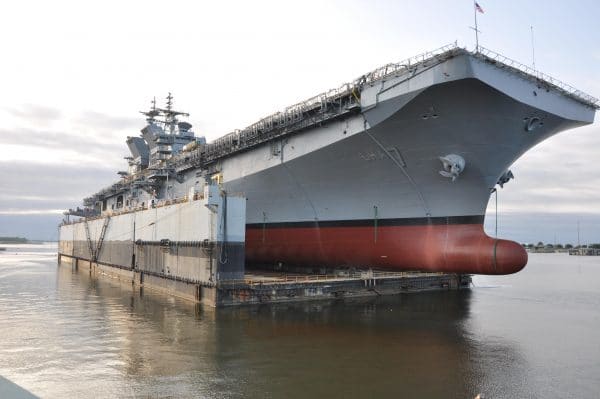 Though lacking the usual fanfare of a big commissioning event, the virtual ceremony on Wednesday officially added the 844-foot Tripoli to the Navy’s fleet.

The Tripoli is the third Navy ship of that name. A force of Marines and about 370 soldiers from 11 other nationalities that were victorious during the 1805 Battle of Derna, in the First Barbary War, were later memorialized in the Marines’ Hymn with the line, “to the shores of Tripoli.”

“(The USS) Tripoli is an example of the continued investment in our Navy, to increase and maintain our edge on the battlefield,” Rear Adm. Philip E. Sobeck, commander of the Expeditionary Strike Group 3, said. “Congratulations to Tripoli’s crew for all of your hard work, amidst these challenging times, to reach this milestone. We welcome you to the amphibious force of combat-ready ships and battle-minded crews to go to sea and support sustained combat operations.” 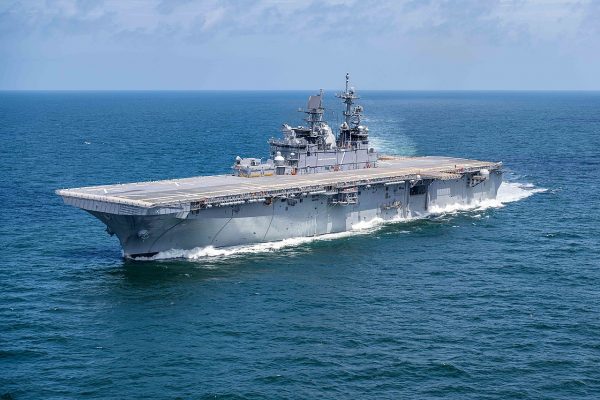 Unlike the 20-year-old Bonhomme Richard, which was undergoing a retrofit to make it able to handle more aircraft, the Tripoli comes stocked with an aviation-centric platform. It has an enlarged hangar deck and aviation maintenance facilities. The ship is the first first of its kind.

A year ago, Marine Corps Commandant General David Berger laid out his plans for a leaner and meaner Marine Corps. In his planning guide, he emphasized returning the Marine Corps to its forward-deployed, expeditionary roots with the Navy. In the last few weeks, two units using heavy equipment were shuttered at Camp Pendleton and a tank battalion at the base in Twentynine Palms. 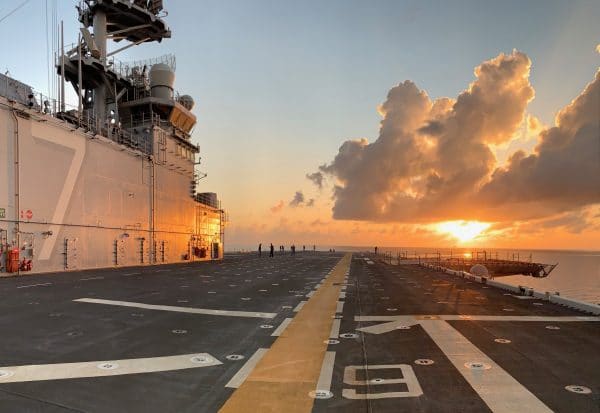 Assault ships like the Tripoli and a retooled Bonhomme Richard are expected to allow Marines to deploy globally as part of the Naval fleet.

The Bonhomme Richard was in the final stages of a two-year upgrade so it could transport the Marine Corps’ F-35 when it caught on fire on Sunday.

The blaze still burned on Thursday and an investigation into the cause of the fire continues. The damage to the Bonhomme Richard is significant, Sobeck said.

About 160 sailors were aboard the ship when the fire broke out. More than 120 fire personnel, civilians and sailors have suffered smoke inhalation. No one has been hospitalized.

Navy officials have said had the ship been at sea, containing a fire of this magnitude would have been far less challenging. Typically, any fire or water in a vessel is handled by closing off the affected compartment, but because the Bonhomme Richard was undergoing construction it had cables and equipment strewn through it and closing off a compartment was not possible, officials said.