Now-deceased lawyer Roy Den Hollander has been named by the FBI as the prime suspect in the fatal shooting at the home of federal Judge Esther Salas on June 19, 2020. Her 20-year-old son was killed and her husband wounded. (For NJ Advance Media/John Jones/TNS)
July 28, 2020 Joe Atmonavage - NJ Advance Media Group
Share
Tweet
Flip

The self-described anti-feminist lawyer was on a crusade to end the U.S. Military’s male-only draft registration system. He was helping represent a New Jersey teen who alleged in a 2015 lawsuit she was being discriminated against because she was unable to register under the Selective Service System as a woman.

At the same time, Marc Angelucci, a California attorney and vice president of the National Coalition for Men, was also making progress arguing the constitutionality of the Selective Service System, which requires nearly all men to register with the agency once they turn 18.

“Roy was furious and beyond words furious, absolutely enraged that (the National Coalition for Men) and Marc Angelucci were getting into the selective service case,” Paul Elam, a men’s rights activist, said on a YouTube show this week. “He viewed that as something proprietary to him.” 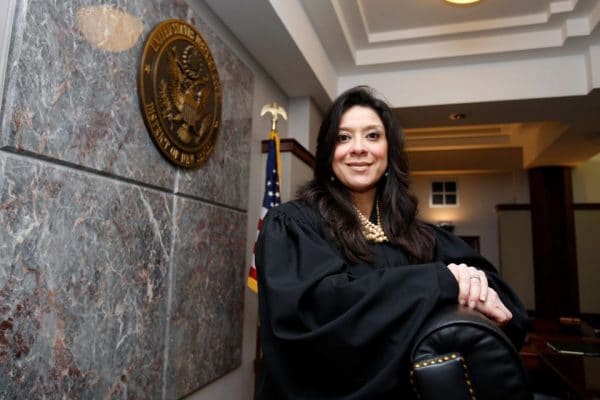 “Roy Den Hollander had a motive to kill Marc Angelucci and one I have known about for years,” Elam said.

Angelucci, of Crestline, California, was found shot dead outside his home on July 11.

The FBI announced Wednesday that it had “evidence linking” Den Hollander to the murder of Angelucci, which sent shockwaves through the men’s rights community where Angelucci was beloved and Den Hollander had been ostracized.

“When (Angelucci) was litigating on behalf of men’s issues, he was still always considering the female plight and perspective,” Cassie Jaye, a friend of Angelucci’s, told CNN. “He was just a great guy and well-loved within the men’s rights community.”

Den Hollander, on the other hand, once wrote that men had one thing readily available that gave them power over women: firearms.

“The moment Roy Den Hollander exposed his instability to us, we said, ‘Thank you but no thank you,‘” Elam, who founded the website “A Voice For Men,” which Den Hollander previously wrote for, said in the video. “Have a good life.”

Less than two weeks after the killing of Angelucci, Den Hollander was identified as the primary suspect in the deadly shooting at U.S. District Judge Salas’ North Brunswick home that left her 20-year-old son, Daniel Anderl, dead and her husband, Mark, critically injured.

Judge Salas presided over a pending case on the Selective Service System in New Jersey federal court that Den Hollander had previously been involved in.

The FBI has not disclosed a motive in the attack at the judge’s home. Salas was not injured.

“We are deeply dismayed to hear that this senseless act was perpetrated by a self-described men’s rights activist and unequivocally denounce anyone who uses violence to intimidate and harm people,” Harry Crouch, president of the National Coalition for Men, said in a statement. “We offer our condolences and prayers to Judge Salas and the Anderl family.”

Den Hollander, according to the New York Times, had a list of at least 10 other people he had scores to settle, including New York State’s chief judge, another federal judge in New Jersey, and a state judge in Manhattan, as well as multiple doctors.

But before he died of an apparent self-inflicted gun shot wound in upstate New York, he targeted two of the people involved in his legal battle against the Selective Service System.

“Females have never been forced to fight, to die, to be physically maimed or psychologically destroyed for America in a just war or a stupid one, but they’ve had the vote for nearly a century,” Den Hollander wrote in a 2013 paper titled, ‘The Draft: Men Only.’ “The times, however, may be ‘a-changing.’”

“So when the next major war or national emergency requires the use of the draft, only females should be drafted,” he also wrote in the paper, which appeared in the Australian Institute of Male Health and Studies. “That would make up to some degree for the past injustices done to all the men who were drafted during the Vietnam War while the ladies stayed safely at home to enjoy life.”

In the paper, Den Hollander expressed concern with how the courts would handle the issue because “logic, when it comes to the courts treating the sexes equally, is often a casualty,” he wrote.

In 2015, Den Hollander was admitted by Judge Salas to offer legal guidance in a pending lawsuit alleging the Selective Service System was unconstitutional, even though he was not admitted to practice law in New Jersey.

He was admitted pro hac vice, a common legal tactic to allow outside counsel to assist in a case.

“My role in this case has been to obtain admission for attorney Roy Den Hollander pro hac vice,” attorney Michael Daher, who initially filed the lawsuit, wrote in a 2016 court filing. “Mr. Den Hollander has done all the research and writing.”

Daher did not respond to multiple requests for comment.

The lawsuit alleges that a then- 17-year-old Morris County resident, was being discriminated against because she could not register for the U.S. military draft as a woman once she turned 18 like men were required to do.

The Department of Justice filed multiple motions to dismiss the case, but Judge Salas ruled in March 2019 to allow the case to move forward.

A week prior to Salas’ ruling, Angelucci scored a victory in the movement to end male-only draft registration when a U.S. District Judge in Texas ruled the practice was unconstitutional. The Department of Justice appealed the ruling.

Den Hollander told USA TODAY that his and Angelucci’s case increased the likelihood that the case would eventually go to the U.S. Supreme Court.

However, shortly after Salas issued her ruling, Den Hollander disappeared from the docket in the New Jersey case.

But he soon posted writings online besmirching the judge in the case. In a collection of writings he posted online in April 2019, Den Hollander posted sexist and racist comments about Salas, who was the first Latina on the federal bench in New Jersey, as well as prominent politicians like Barack Obama and Hillary Clinton.

He said “affirmative action” was the reason for Salas’ judicial status and like other Latina judges was “driven by an inferiority complex.”

In the Selective Service System case, he believed Salas was deliberately delaying the case and was “trying to keep this case in her court until a weatherman showed her which way the legal winds were blowing.”

Behind the scenes, Den Hollander was trying to find someone to revive the case.

Nick Gravante, a managing partner at New York-based Boies Schiller Flexner, received a phone call in May 2019 — two months after Judge Salas ruled the case could go forward — from Den Hollander who said he had terminal cancer and hoped Gravante’s firm would take over the case.

The firm eventually would, but Gravante told Den Hollander he could not be involved after reviewing his racist and sexist online posts.

Gravante told NJ Advance Media earlier this week he didn’t hear from Den Hollander or about him again for more than a year until authorities identified him as suspect in the shooting at Judge Salas’ home.

Den Hollander, 72, was found dead the next day from an apparent self-inflicted gunshot wound in the New York town of Rockland.

A new judge was assigned to the Selective Service System case in New Jersey federal court Wednesday, according to online court documents, and it will proceed forward.