A double-amputee was sentenced to 25 years in prison for opening fire at the Veterans Administration Medical Center in Riviera Beach last year but may only serve a fraction of that term.

Larry Ray Bon, who shot two people and terrorized others during his February 2019 rampage, will be held in a federal prison that can give him the mental-health treatment he needs, U.S. District Judge Kenneth Marra ordered.

If Bon no longer needs specialized treatment, he will be returned to court, where he will face a possible 12 ½- to 25-year sentence, under a plea agreement Marra approved. If that doesn’t happen for 18 years, he can ask for early release.

Bon, 60, who lost one leg to a motorcycle accident and another to an infection, opted not to attend the hearing and remained at the Federal Detention Center in Miami. 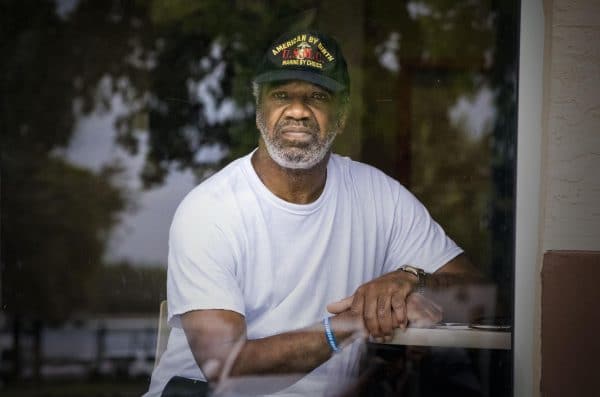 Alfred Gaines, an employee of the VA Medical Center who was shot at the Riviera Beach hospital on Feb. 27, is fighting to receive workers’ compensation. [DAMON HIGGINS/palmbeachpost.com/TNS]

He learned his fate while watching a Zoom video conference, which have become the norm for federal court hearings since the coronavius began gripping the state in March.

Five people, including the emergency-room doctor who was shot in the neck as he wrested the gun away from Bon, told Marra about the psychological pain they still suffer.

Dr. Bruce Goldfeder has yet to return to work and doesn’t know when — or if — he ever will. Four others said they, too, relive the nightmare.

Albert Gaines, who was shot in the rear end when a bullet ricocheted off a wall, listened to the video hearing but technical difficulties prevented him from addressing Marra.

After the hearing, he said he had mixed feelings about Bon’s sentence and the way the VA has handled the victims in the shooting’s aftermath.

While Gaines is continuing to fight to make sure he continues to get partial worker’s compensation to cover both his physical and psychological injuries, the Marine Corps veteran said he accepted Bon’s punishment.

“It is what it is,” Gaines said. “You just have to roll with the punches.”

Bon arrived at the hospital early on Feb. 27, 2019, to see his primary-care physician, Riviera Beach police said. Concerned about his mental health, his doctor told him to go to the emergency room to be evaluated to determine whether he should be involuntarily committed for mental-health treatment under the state’s Baker Act.

At 6:30 p.m., an agitated Bon pulled a gun out of his pants and began shooting.

He pleaded guilty in March to three counts of assaulting a federal employee and one charge of being a felon in possession of a handgun.

A Michigan native, he was honorably discharged from the U.S. Army when he was in boot camp. His family told The Palm Beach Post that he struggled with alcoholism and mental illness for years and moved to West Palm Beach about five years ago.

He was previous convicted of making a bomb threat, said his attorney, Assistant Federal Public Defender Kristy Militello. But, Assistant U.S. Attorney Susan Osborne said, he had never been convicted of a crime of violence.