Questioning of four top technology executives by lawmakers on the House Judiciary Antitrust, Commercial, and Administrative Law Subcommittee on Wednesday yielded key insights about the direction of its ongoing investigation into potentially anti-competitive business practices by Amazon, Apple, Facebook and Google.

But the hearing seemed at times to take place in dual universes. In one, Democrats focused largely on the topic at hand. In the other, Republicans used the opportunity to level accusations of anti-conservative bias in Silicon Valley and censorship of conservative voices online.

The executives — Amazon’s Jeff Bezos, Apple’s Tim Cook, Facebook’s Mark Zuckerberg and Google’s Sundar Pichai — managed to steer clear of most of those accusations, arguing that their platforms are politically neutral. But under questioning related to their business practices, including their corporate acquisitions, the tycoons appeared more vulnerable. 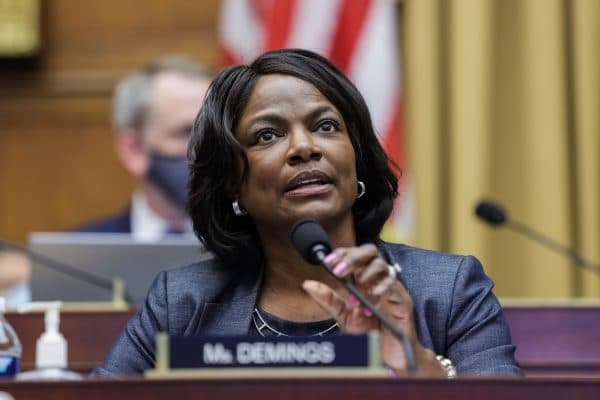 Rep. Val Demings (D-FL) speaks during the House Judiciary Subcommittee on Antitrust, Commercial and Administrative Law hearing on Online Platforms and Market Power in the Rayburn House office Building, July 29, 2020 on Capitol Hill in Washington, DC. The committee was scheduled to hear testimony from the CEOs of Apple, Facebook, Amazon and Google. (Graeme Jennings-Pool/Getty Images/TNS)

Here are five key takeaways from the landmark proceedings.

1. Amazon questioned on use of sales data by private sellers

One of the most hotly anticipated lines of questioning at the hearing didn’t come right away, possibly because of technical difficulties Bezos experienced during the hearing’s early stages.

But when Rep. Pramila Jayapal, D-Wash., asked the Amazon executive whether his company accesses and uses data on the third-party sellers who use its platform in its business decisions, the manner in which Bezos answered was notable.

“I can’t answer that question yes or no,” Bezos told Jayapal.

During the course of its investigation, the subcommittee questioned an Amazon associate general counsel, Nate Sutton, who testified that the company does not “use any seller data to compete” with third-party sellers. Sutton also said Amazon does not use those sellers’ “individual data when we’re making decisions to launch private brands.” 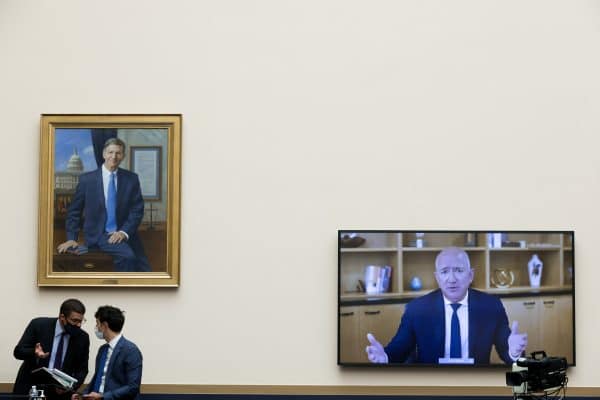 But on April 23, a Wall Street Journal report asserted that Amazon has done exactly that. Judiciary Chairman Jerrold Nadler, D-N.Y., and Rep. David Cicilline, D-R.I., the subcommittee chairman, issued a statement that if the report is accurate, Sutton’s testimony would “appear to be misleading, and possibly criminally false or perjurious.”

Under questioning by Jayapal, Bezos said Amazon has a policy against using third-party data but that he could not “guarantee that policy has never been violated.”

Amazon is conducting an internal investigation into the allegations. Bezos said he would share the results with the committee once it is complete.

Cicilline said the committee’s investigation showed Google had stolen the content of other websites, including Yelp, in order “to bootstrap its own rival local search business.” 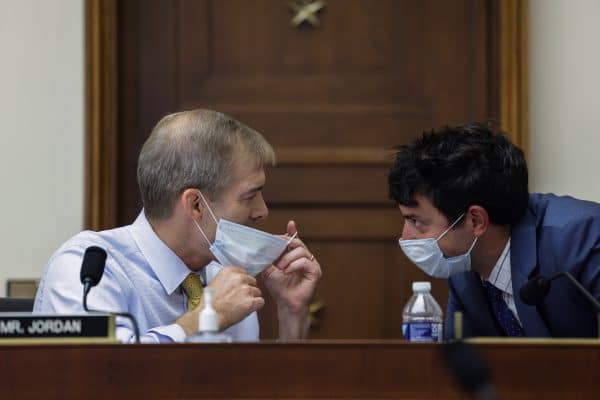 Rep. Jim Jordan (R-OH) confers with a staff member during the House Judiciary Subcommittee on Antitrust, Commercial and Administrative Law hearing on Online Platforms and Market Power in the Rayburn House office Building, July 29, 2020 on Capitol Hill in Washington, DC. The committee was scheduled to hear testimony from the CEOs of Apple, Facebook, Amazon and Google. (Graeme Jennings-Pool/Getty Images/TNS)

When Yelp asked Google to stop doing that, the search engine giant responded by threatening to “delist Yelp entirely,” Cicilline said. “In other words, the choice Google gave you was ‘let us steal your content or effectively disappear from the web.’ Isn’t that anti-competitive?”

Pichai said Google was focused on giving users what they wanted and offered to provide more answers after understanding details of the case that Cicilline mentioned.

In addition to stealing other websites’ content, Google searches also “privilege its own sites,” Cicilline said, adding that most web searches that start on Google also “end somewhere on Google’s own websites.”

Taken together, “the evidence seems very clear to me as Google became the gateway to the internet it began to abuse its power and use its surveillance over web traffic to identify competitive threats and crushed them,” Cicilline said.

In an early exchange, Nadler said documents unearthed by the investigation showed that Facebook saw Instagram, the popular photo-sharing app, as a “powerful threat that could siphon business away from Facebook.”

“This is exactly the type of anti-competitive acquisition the antitrust laws were designed to prevent,” Nadler said. “This should never have been permitted to happen, and it cannot happen again.”

Zuckerberg defended the acquisition, saying it was cleared by federal antitrust regulators when it was proposed and has proven to be “wildly successful” largely because of efforts by Facebook to grow Instagram.

“I’ve been clear that Instagram was a competitor in the space of mobile photo sharing,” Zuckerberg said. “By having them join us, they certainly went from being a competitor … to an app that we could help grow.”

Jayapal questioned Zuckerberg about internal emails from 2012 showing that the company sought to copy features and aspects of its competitors’ products, especially Instagram.

Zuckerberg said the company had “certainly adapted features that others led in,” as have others.

Jayapal also said she had documents showing that Facebook had “threatened to clone the products of another company while also attempting to acquire that company,” referring to Facebook’s attempts to develop a camera app to rival that of Instagram.

Instagram founder Kevin Systrom had said in emails to some investors that he felt threatened that if he didn’t sell his company to Facebook, then Zuckerberg would copy or clone the photo feature to destroy Instagram.

Zuckerberg denied he had ever threatened Systrom.

Rep. Hank Johnson, D-Ga., said Apple wielded “an enormous amount of power” because of the coveted app marketplace and the rules “get changed to benefit Apple at the expense of app developers in the App Store.”

Apple’s Cook said that the company evaluates every app before it is featured on the App Store and treats every developer equally and that the rules were “open and transparent.”

Johnson also said that Apple assigned some of its employees to help large app developers such as China’s Baidu to navigate Apple’s bureaucracy, compared with smaller developers who had to deal with the process on their own.

Cook said he was unaware of such practices, adding that Apple executives engage with app developers large and small.

Cook also denied allegations that the company threatened or retaliated against app developers who went public with their criticisms and also denied that Apple had increased commissions it charges app developers.

From the hearing’s outset, it was clear that the panel’s Republicans would engage in lines of questioning that had little to do with antitrust. They asked about alleged anti-conservative bias, content moderation and each company’s business activities in China.

And although observers could be forgiven for mistaking their interest in other issues as a lack of interest in antitrust, a key exchange between Bezos and the subcommittee’s ranking member — Rep. Jim Sensenbrenner, R-Wis. — revealed a more likely explanation: Republicans are against passing new antitrust laws.

The current debate in antitrust divides those who follow theories espoused by conservative legal icon Robert Bork, who believed that a company establishing market dominance by acquiring smaller companies was good for consumers as long as prices stayed low, and those who apply the beliefs of former Supreme Court Justice Louis Brandeis, who opposed monopolies.

On Wednesday, Sensenbrenner revealed himself to be a Borkian.

“History shows that Congress does a poor job of picking winners and losers,” he said. “I have reached the conclusion that we do not need to change our antitrust laws.”

Sensenbrenner then asked Bezos how customers would benefit from the government breaking up Amazon.

“They would not be,” Bezos said.