At age 11, Donal L. Staples Sr. learned how to boat off the shores of Brant Rock. One of eight children, he joined the Navy at age 17 during World War II and put his nautical skills to good use.

After the war, he returned home, became a lobsterman, married, raised five children and was well-known in South Shore lobster circles. In 1985, he and his wife, Elaine, retired to Maine, where he lives today in the Maine Veterans Homes in Scarborough.

Staples rarely spoke about his service in both WWII and the Korean War until his later years. But in May, after he contracted COVID-19 at age 92 and survived, his family decided it was time to celebrate that service. 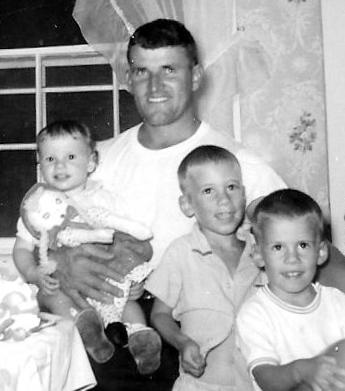 In 1958, Donal Staples Sr. with his children Sandra, Donnie and Greg at home in Marshfield.
(The Patriot Ledger/TNS)

“My dad has had some tough times in his life, but surviving COVID-19 was a lot to endure,” his daughter Sandra Staples-Bortner, of Cathlamet, WA. said.

Although Staples did not have COVID-related breathing or heart problems, he was distressed by “two months of isolation in his room surrounded by caretakers who wore full protective gear, including gown, face mask and face shield,” his daughter said.

He saw family members only during occasional Skype calls and window visits. 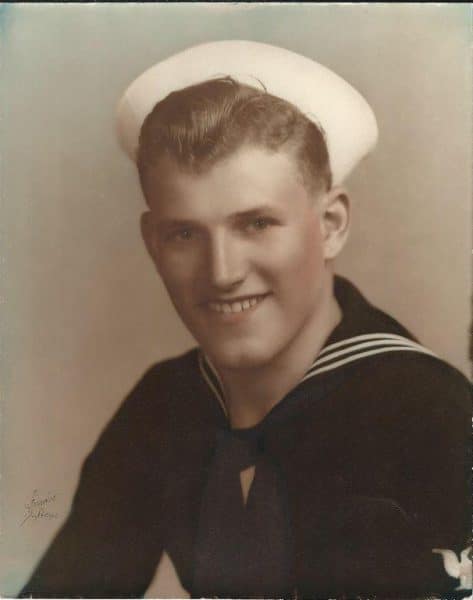 Donal Staples Sr., in 1944. Now 92, the Marshfield native is a resident of the Maine Veterans Homes in Scarborough. He recently survived COVID-19 and then received long overdue medals for his military service in WWII and the Korea War in the U.S. Navy.
(The Patriot Ledger/TNS)

“For someone with moderate dementia, this turned his world upside-down,” Staples-Bortner said. “He lost 38 pounds and couldn’t understand what had happened to change his world so dramatically.”

In mid-May, he resumed physical therapy, fell, broke his hip and had a hip replacement.

To cheer him up, his family focused on Staples’ pride in his Navy service. His son-in-law Brad Bortner ordered his military service medals, and other family members arranged for staff at the veterans home to present them in a brief pinning ceremony.

Nineteen relatives – including children, grandchildren, great-grandchildren and others – were there on June 2 via the Zoom online meeting website. Sitting erect at attention in his wheelchair, Staples quietly said, “It was an honor just to be allowed to serve.” 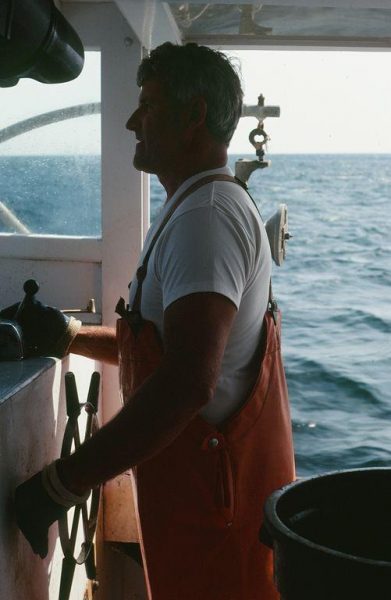 Donal Staples lobstering on his boat Elaine B in July 1983.
(The Patriot Ledger/TNS)

Donal Staples Sr.’s service in the U.S. Navy also has been commemorated on the World War II Monument at Marshfield Town Hall and the Veterans Honor Roll at South River Park, Marshfield.

His daughter has spent the past several years interviewing her father about his military service and his life in Marshfield. In stories she has written, she describes how he served on the USS Chandeleur, a seaplane tender, in 1945:

“The seaman first class was dropped off on his new ship at Kerama Retto, a Japanese archipelago that served as a supply and maintenance anchorage for U.S. ships in the Battle of Okinawa. Three days after Don’s arrival, the initial U.S. assault began on Okinawa.

“The Chandeleur was a seaplane tender. Seaplanes from the ship flew reconnaissance runs looking for enemy ships and submarines, and then called in bombers. Seaman First Class Staples was responsible for running a 35-foot re-arming boat. He had one crewman, who was a second-class aviation mechanic. ‘He outranked me by a lot and wasn’t very happy about working for a lowly seaman. But I was running the boat, so I was in charge,’ Don said.

His daughter describes how Staples “timed the swells and told his captain exactly when to step off. He repeated this again when it was time for the captain to board the small boat once again.

“He never got his feet wet; he never got washed overboard either,” Staples told his daughter.

“His skill apparently caught the eye of the captain as, later that day, Staples was in his quarters when he was ordered to the fantail,” his daughter wrote. He had just been promoted to third-class aviation boatswain mate.

After WWII, Staples served in the Navy Reserve and was called up during the Korean War from 1951 to 1952 aboard the USS Salerno Bay, a small aircraft carrier. As a third-class aviation boatswain mate, he was in charge of the flight deck crew.

“One time we had a Russian submarine down for 21 days,” Staples told his daughter. “The captain and officers lined up to salute me as I departed the ship for the last time. That was quite an honor.”

The pinning ceremony to receive his long-overdue service medals turned out to be just the right treatment for the long isolation and depression caused by COVID confinement.