At times, it seemed almost all of the nation’s capital came out to protest racism and police brutality on Saturday.

Tens of thousands of people converged on the newly — and officially — named Black Lives Matter Plaza smack dab in front of the White House, which now resembles a fortress surrounded by high fences and concrete barriers, to decry the police killing of George Floyd in Minneapolis.

Black power activists came, along with women from the YWCA. Army vets and union recruiters. Heavily tattooed people and women in hijabs. Children and gray-haired grandmothers. Federal workers, priests, doctors in scrubs, people with Bibles who seemed familiar enough with the book to know how to hold it.

Unlike earlier this week, there was minimal police presence and no reports of violence or vandalism. The mood was serious and passionate but also peaceful and friendly.

And the mayor was there.

“You know we have to speak up loudly for more justice and more peace!” Mayor Muriel Bowser called out to the crowd.

Few American cities have embraced the demonstrations over the police killing of Floyd, and of the heavy-handed federal response, as enthusiastically as the District of Columbia. And that has led to a battle between Bowser and the occupant of the besieged White House, President Donald Trump.

At Bowser’s order, district public works crews on Friday painted “Black Lives Matter” in huge neon-yellow letters, stretching from curb to curb and down two full city blocks on 16th Street, which leads directly to the White House. Trump snapped back on Twitter, calling her “incompetent.” 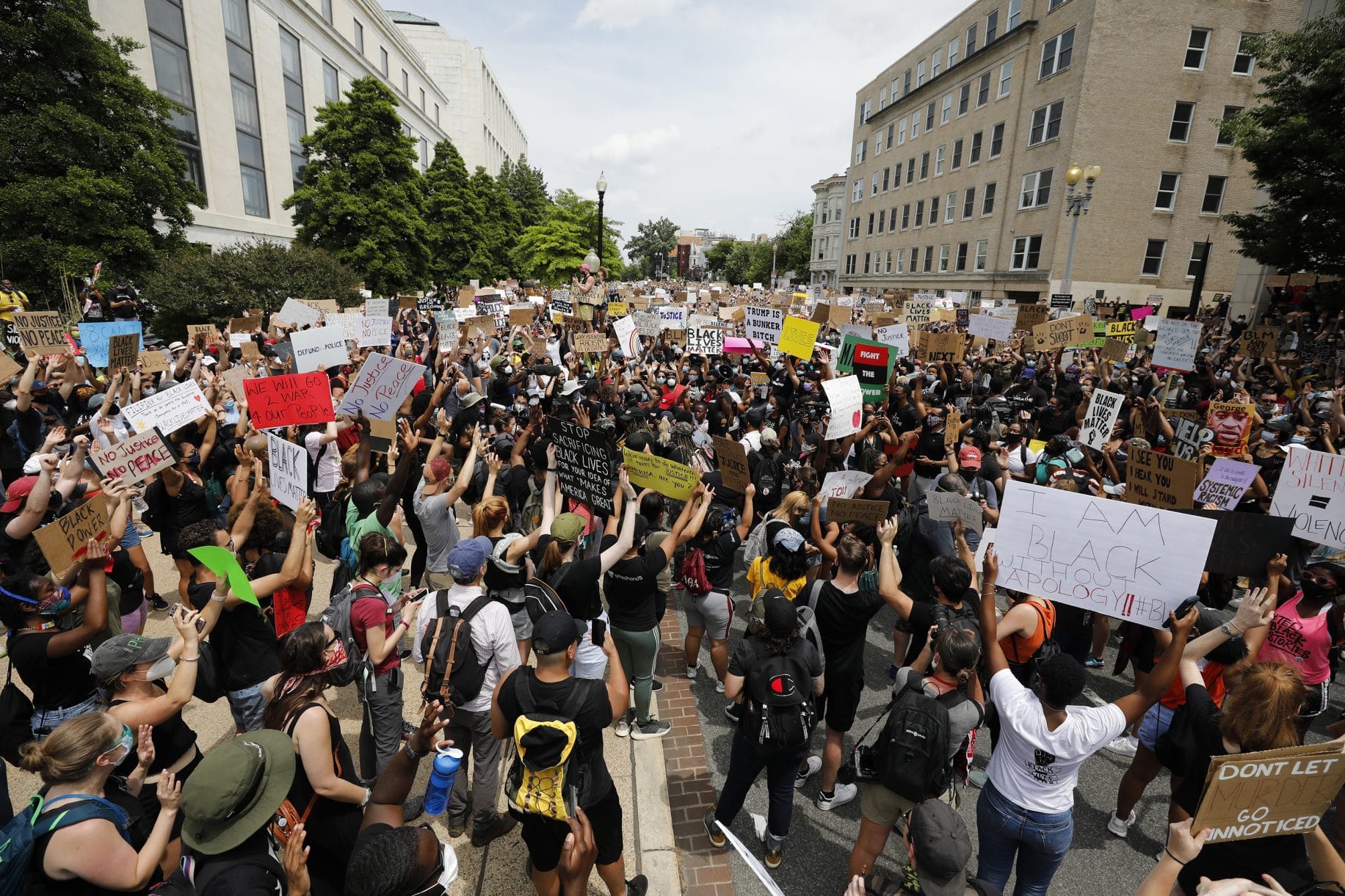 City officials expected Saturday’s demonstrations, which also took place in nearby Maryland and Virginia suburbs, to be the largest so far. Rallies resumed for the ninth consecutive day across the country.

“The silent majority cannot be silent anymore,” said Eileen Suffian, a 64-year-old accountant who attended the Washington rally with her rescue dog Moxie. “Where there is justice somewhere, there is justice everywhere.” 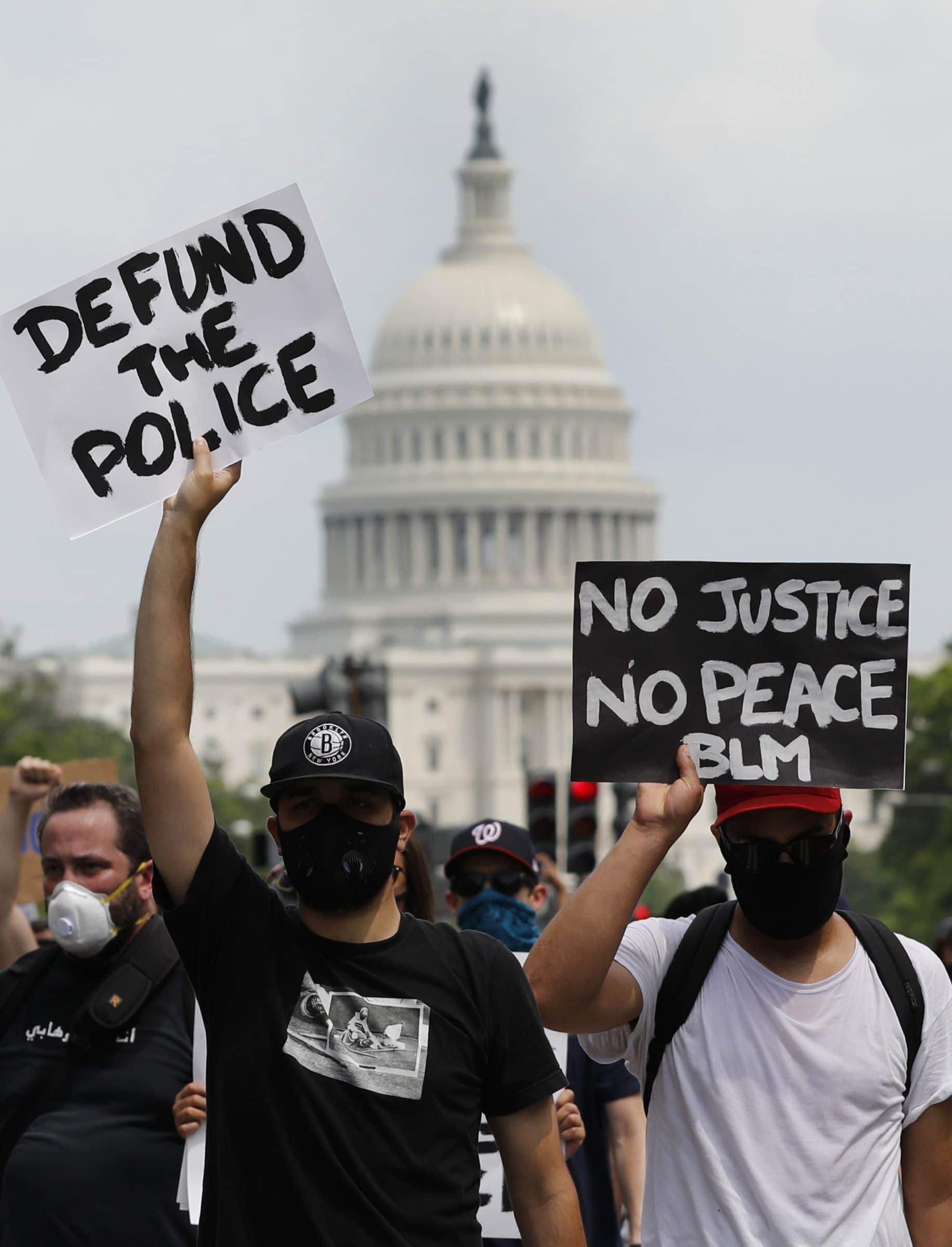 Thousands of demonstrators march from Capitol Hill during a protest against the death of George Floyd in Minneapolis police custody, in Washington, D.C., on Saturday, June 6, 2020. (Yuri Gripas/Abaca Press/TNS)

As part of the age group considered more vulnerable to the coronavirus, Suffian said she spent weeks trying to avoid crowds. But after federal officials used riot police and National Guard troops, chemical gas and low-flying military helicopters to scatter peaceful protesters near the White House on Monday, she said she had to act.

“The government mobilizing the Army against its own citizens — I never thought I’d live to see that,” she said. 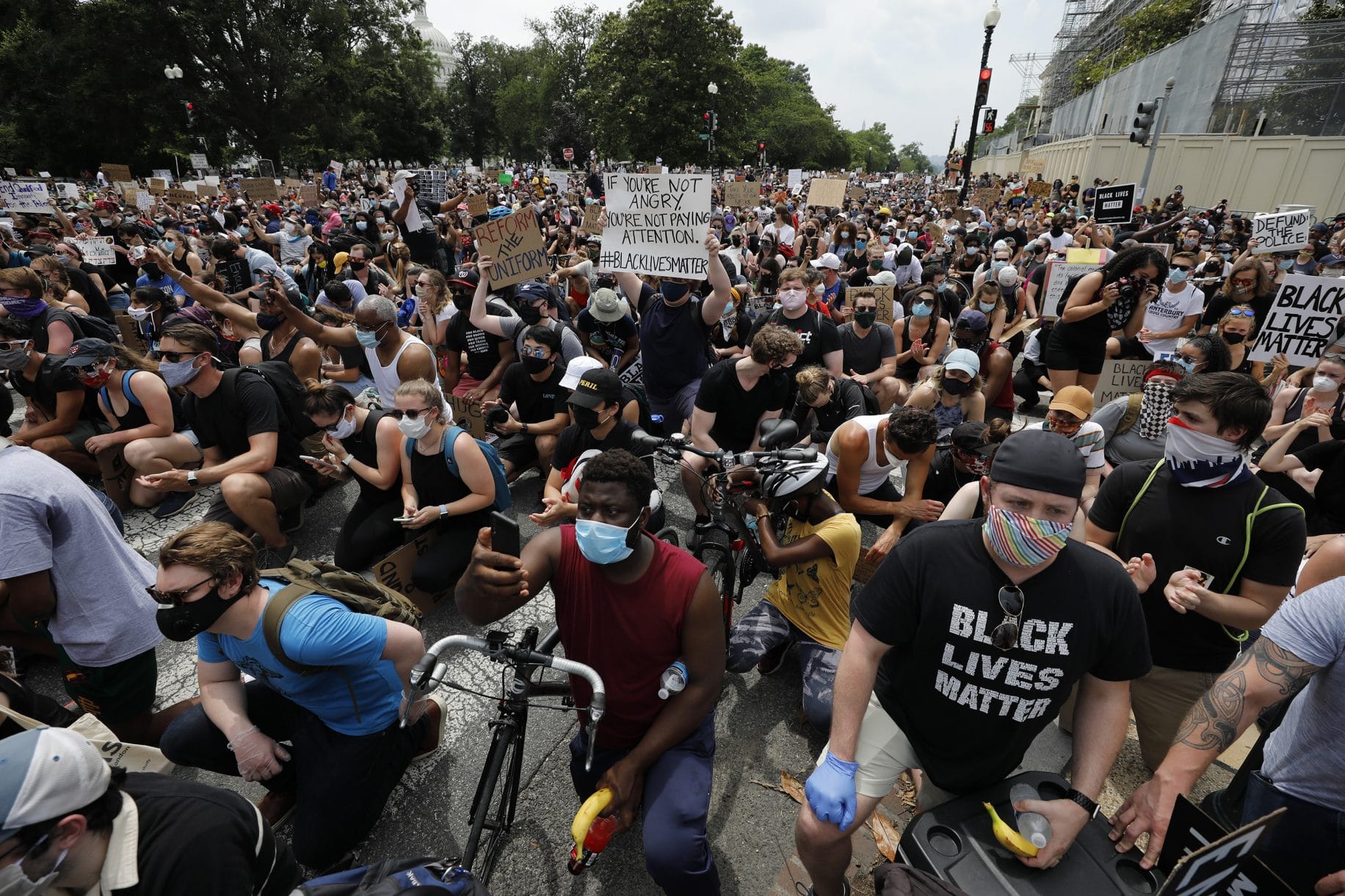 Noel Rubio, 24, the son of immigrants from the Philippines, said the causes of civil rights and LGBTQ equality have benefited from black activism, and it was time to return the support.

“We are standing up for our black brothers and sisters to say, Enough is enough,” said Rubio, who works in Washington as a consultant.

Unlike most of the carefully choreographed marches and rallies that often occur in Washington, the anti-racism protest Saturday appeared a grass-roots effort with no single organizer or group in charge. It was broadly dispersed, with parades of people hoisting signs, wearing masks and chanting cries for justice as they crisscrossed the city in sweltering heat. 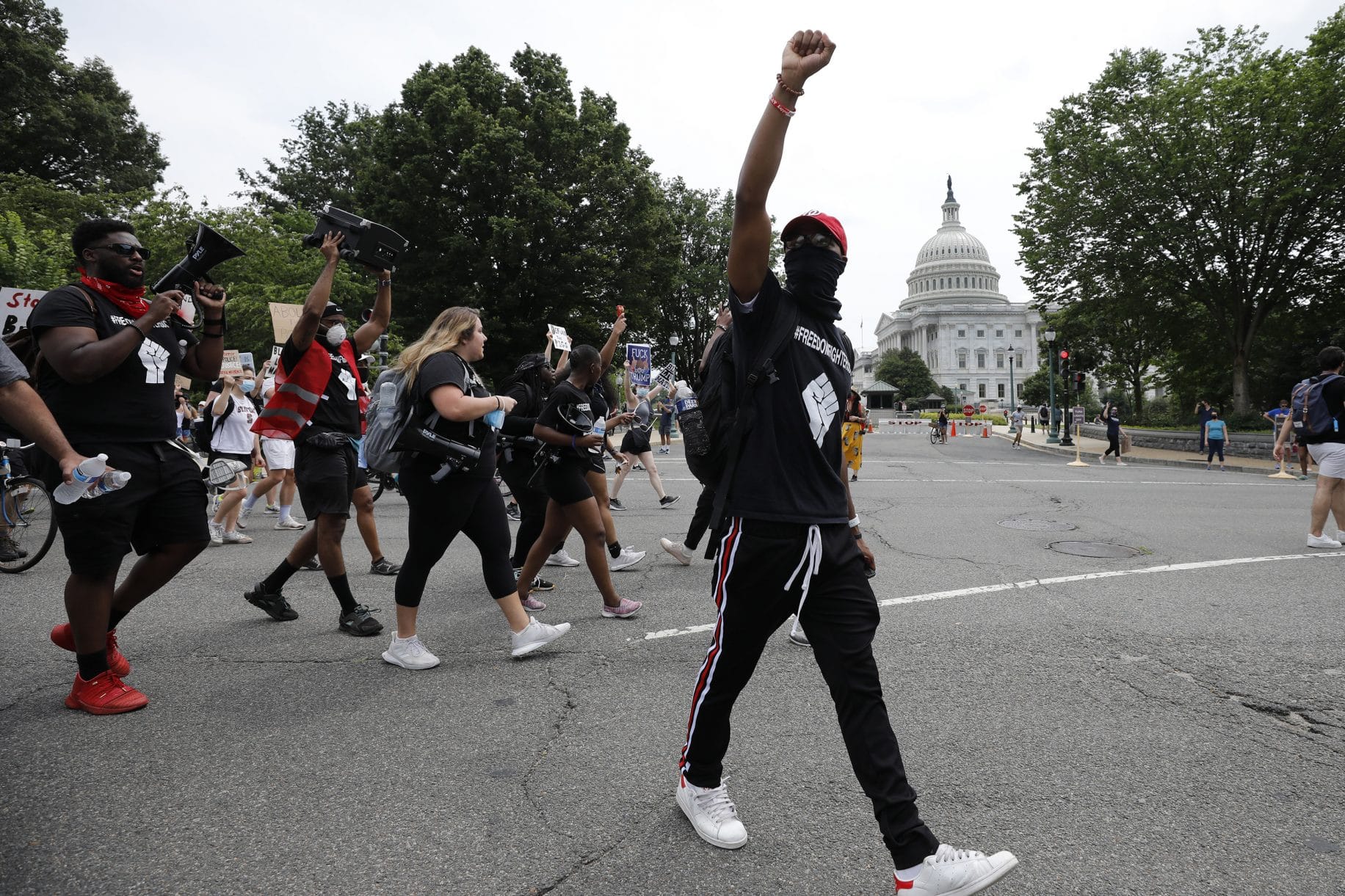 With much of the downtown closed to traffic, crowds stretched about a mile up 16th Street from the White House, and for about two miles from Capitol Hill to the White House. Demonstrators also crowded the grassy National Mall, massing in front of the Lincoln Memorial and other monuments.

Some protesters stopped to take a knee. Others held up their hands and chanted, “Don’t shoot!” Almost to a person, they carried signs, as well as masks, proclaiming, “I can’t breathe” or “Black futures matter.”

In some spots music blared from speakers; elsewhere, there were competitions of megaphones broadcasting speeches.

Along the many routes, in the intense heat and humidity, churches and individual groups offered free bottles of water, lunches and squirts of hand sanitizer to the demonstrators.

Several protesters credited Bowser for having stepped in after the Monday crackdown, when protesters were violently cleared so that Trump could make his way to St. John’s Episcopal Church for a photo op. Since then, several protesters said, the atmosphere has shifted from a military-occupied city to something closer to a street festival.

“We are going to continue to change our policing methods to make them the most acceptable to the community we serve,” Police Chief Peter Newsham said as he welcomed Saturday’s demonstrations.

In another dig at Trump, Bowser asked governors who sent National Guard troops to withdraw them, saying they were unnecessary and “encroached on the rights” of city residents. On Friday, after Bowser complained, the Pentagon said it was withdrawing the 1,600 active-duty troops it had sent to bases near the city.

Andrew Duggins, who completed four deployments in Afghanistan before retiring from the Army as a captain last year, said he was stunned to realize that the military has more rules about use of force than the police in Minneapolis, where Floyd died after a white police officer knelt on his neck for nearly nine minutes.

“We had escalation-of-force procedures, and if we didn’t follow them, we’d get hammered,” he said.

One question that swirled through the crowds Saturday was simple. What comes next? Will the wave of anguish and activism translate into votes in November?

“I sense an energy, a pressure for real substantive change,” said Father Patrick Keyser, an Episcopal priest who welcomed demonstrators outside St. John’s. “Not to say it will be easy.”

Russia can now use nukes if attacked with non-nuclear weapons