Honored for his decades of resolute military and government service, former Rep. Sam Johnson was laid to rest Monday.

His private burial followed a procession through Plano, where he had lived and died, to Restland Memorial Park Cemetery in Dallas.

About 200 relatives, friends and colleagues gathered to share memories of the man who served 28 years as a Republican in the U.S. House of Representatives after nearly 30 in the Air Force.

Johnson was a pilot in the Korean and Vietnam wars and was held prisoner for nearly seven years after he was shot down in April 1966.

He and Sen. John McCain, who died in 2018, were captives at the same time at the notorious North Vietnamese prison known as the Hanoi Hilton. 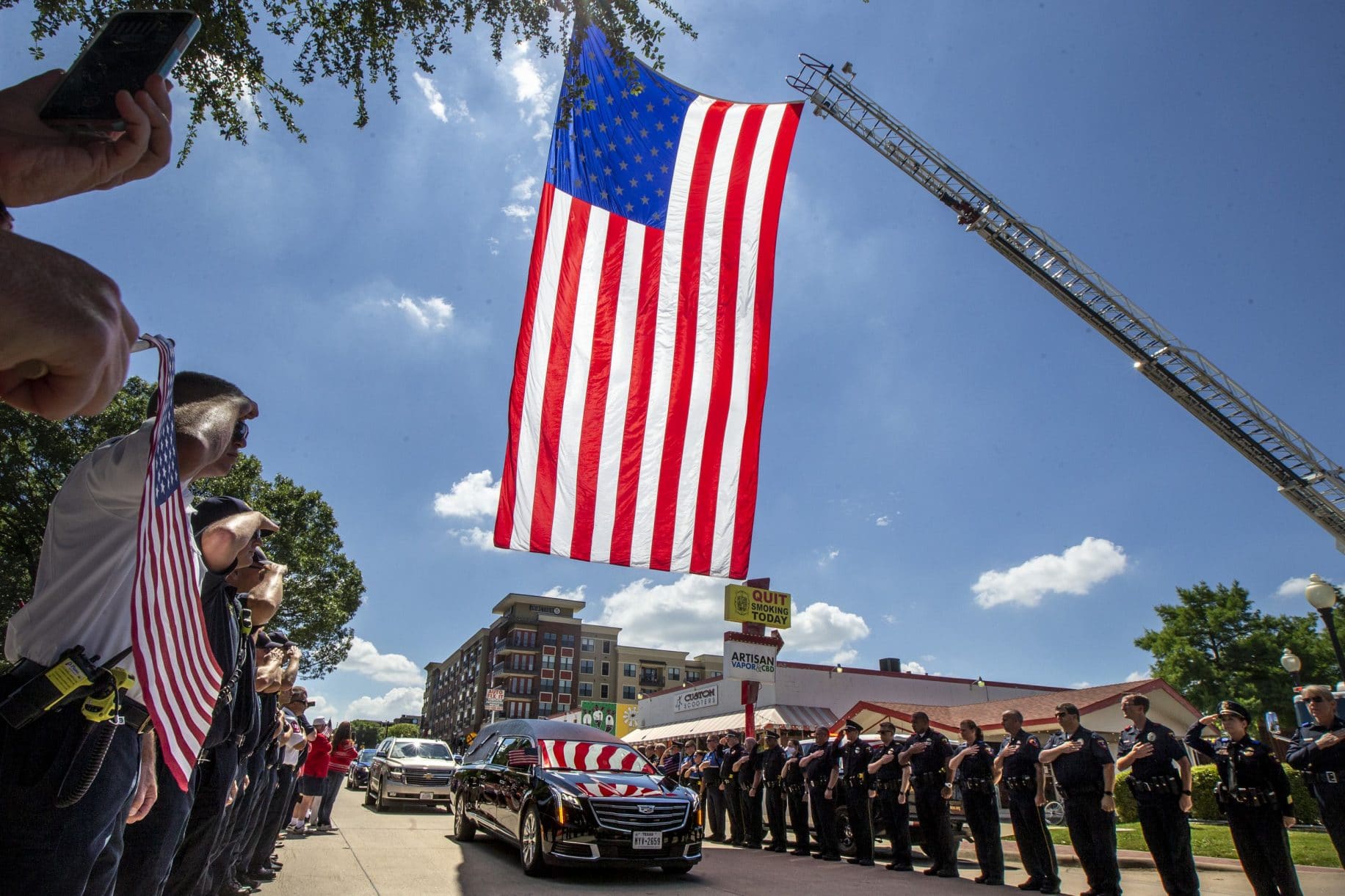 Plano police and first responders salute as the hearse carrying the body of Congressman Samuel Robert Johnson down travels on 15th Street in Plano, Texas, during a processional prior to the congressmanu2019s funeral on Monday, June 8, 2020. (Lynda M. Gonzalez/Staff Photographer/TNS)

In his eulogy, Jack Graham, pastor of Prestonwood Baptist Church, recalled Johnson’s unwavering bravery as he endured torture and years of solitary confinement.

Once during his imprisonment, Johnson expected to face execution, Graham said. When the firing squad didn’t shoot, he laughed at his would-be killers.

The pastor said he believed Johnson’s faith in God gave him a fearlessness that endured until his death May 27.

“I’m just thinking that as Sam faced death and he went on to heaven, he laughed at death,” Graham said, “because he understood in the fear of the Lord, and in the faith of God, that death is a victory for the believer. Death is a triumph for those who know and put their trust in him.” 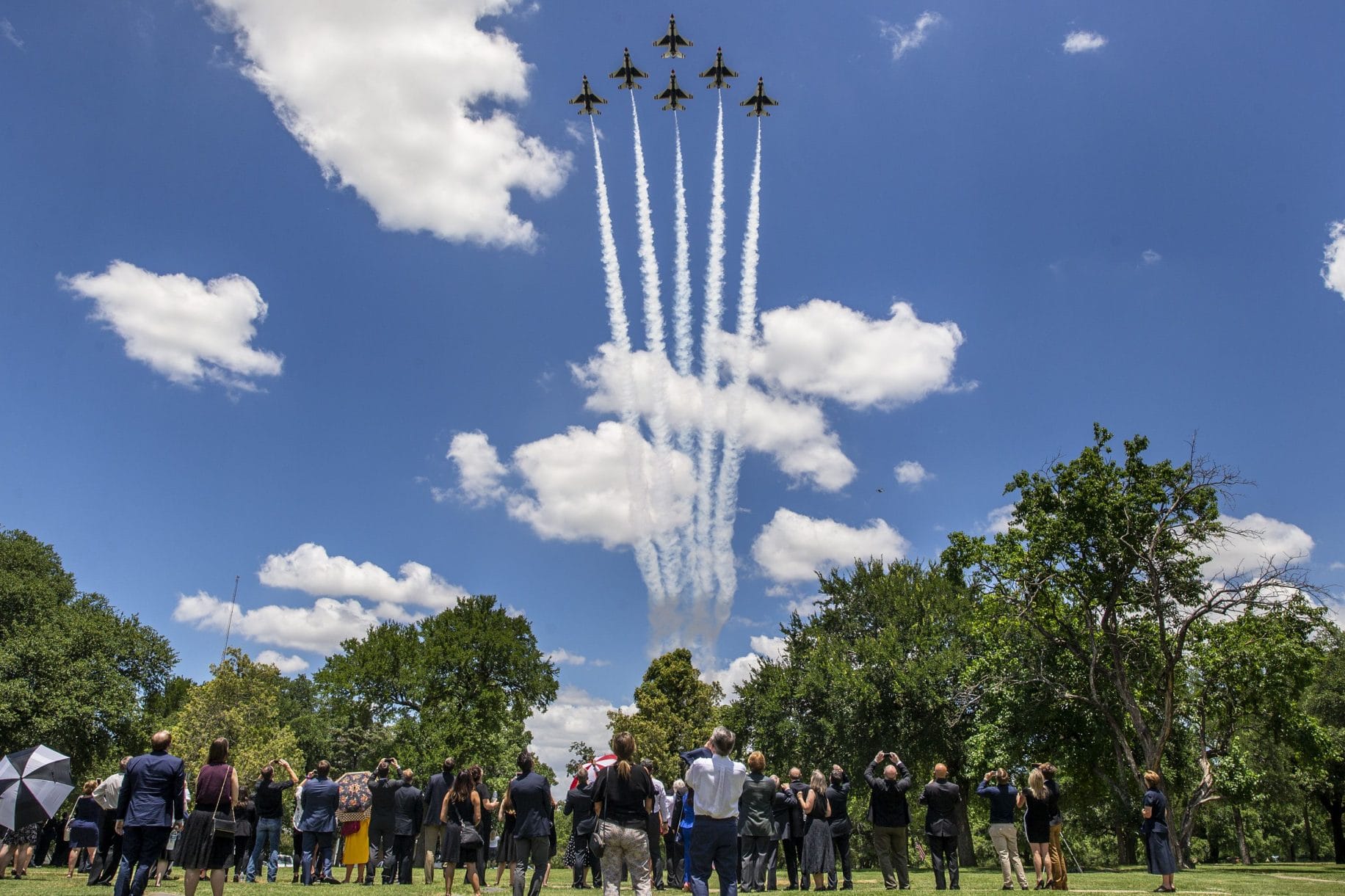 The United States Air Force Air Demonstration Squadron u201cThunderbirdsu201d perform a ceremonial flyover during the funeral for Congressman Sam Johnson at the Restland Memorial Park in Dallas on Monday, June 8, 2020. In addition to 28 years of service as a congressional representative for Texasu2019 3rd District, Johnson was also a fighter pilot, decorated combat veteran and a former Prisoner of War. (Lynda M. Gonzalez/Staff Photographer/TNS)

Johnson was born Oct. 11, 1930, in San Antonio. He graduated from Dallas’ Woodrow Wilson High School and attended Southern Methodist University, where he wed his high school sweetheart, Shirley Melton. The two were married for 65 years until her death in 2015. Their son, James Robert “Bob” Johnson, died in 2013.

Johnson, who served in the Texas House from 1985 to 1991 before he was elected to the U.S. House of Representatives, was remembered as a determined and honest politician.

Graham told mourners about visiting Johnson in Washington while he was still serving — and still driving — in his mid-80s.

As the congressman complained about the traffic, Graham asked him whether he had a driver to take him places.

“He looked at me and he said, ‘Pastor, you know better than that,’ ” Graham said as the audience laughed. “It just told me something about the grit and the grace of this man and his heart. He didn’t need somebody to drive him. He was there in Washington, D.C., to be of service to the people and to be a servant of God.”

Following the service, the Air Force Thunderbirds flew over the cemetery before mourners filed past Johnson’s casket to pay their final respects.

Former Energy Secretary and Texas Gov. Rick Perry recalled the beginning of his friendship with Johnson when they were freshman lawmakers in Austin, though Johnson was 19 years older.

“He was one of the real leaders of the class,” he said, “both because of his hero — literal hero — status, but also he was just a good father figure for us.”

Johnson is survived by his daughters, Gini Mulligan and Beverly Briney, 10 grandchildren and five great-grandchildren.