Shooting at Seattle’s CHOP protest site kills one, leaves another in critical condition

One person was killed and another was wounded early Monday morning when they were shot in the protest area known as CHOP, in Seattle’s Capitol Hill neighborhood.

Seattle police tweeted that the shooting happened near 12th Avenue and Pike Street.

As of 5:40 a.m., one patient had died and the other was in critical condition, according to Gregg, who said both patients were male. 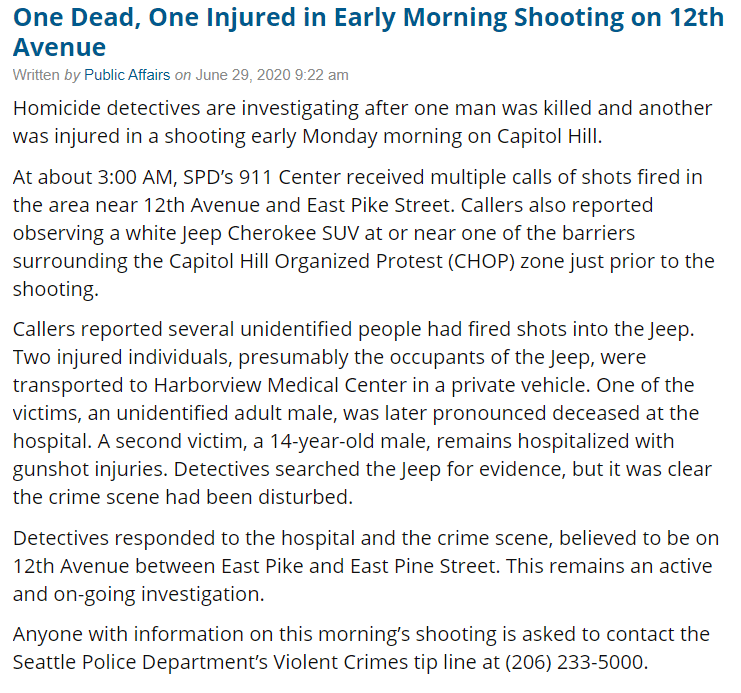 Varying details of the shooting were posted to social media Monday morning. One person tweeted that “two guys” in a white SUV showed up and opened fire on the protest area before being “MURKED” by security on the ground.

Seattle police were at the scene Monday morning but did not immediately provide any additional information.

CHOP stands for Capitol Hill Organized Protest. Demonstrators have occupied several blocks around the Police Department’s East Precinct and Cal Anderson Park for about three weeks, since the police left the precinct following standoffs and clashes with protesters calling for racial justice and an end to police brutality.

Several shootings have happened in the area over the past week and a half.

The protest zone has drawn the attention of President Donald Trump, who tweeted Monday morning that the protesters “have ZERO respect for Government.”