Remembering our fallen fathers like Capt. Ridgley, SSG Bertolino and so many others

Dulles, Virginia – “I’m coming home,” said Captain Charles Ridgley to a friend, “I’m going to make my baby’s graduation.” Sadly, he never did. With only two weeks left in his deployment to Afghanistan, Ridgley died on April 16, 2011, in Nangarhar Province. A grenade attack by a Taliban terrorist took his life, forcing his daughter Marissa to celebrate her high school graduation without him. A few years after high school, Marissa enrolled in her father’s alma mater, the University of Alaska-Anchorage.

Charles Ridgley grew up in Baltimore, enlisted in the Army in 1990, left the service for a few years, and returned in 2007, when he was commissioned a quartermaster officer. He went on to serve for nearly twenty years. He was a decorated Soldier with a Bronze Star and Purple Heart who valued education. While he was stationed at Alaska’s Fort Richardson, he earned his undergraduate degree in business and was working on his master’s degree when he died. 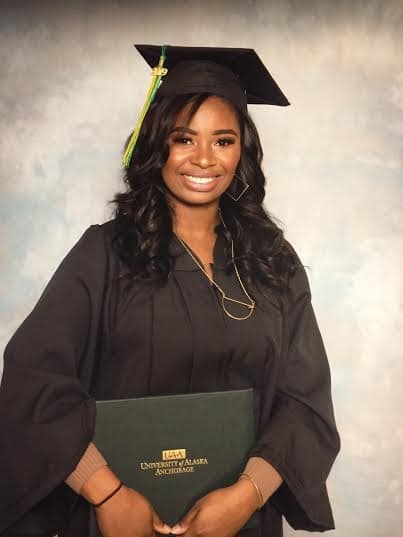 Seeing his daughter graduate would have made Charles Ridgley proud. Marissa’s father was her greatest advocate and loudest cheerleader. When she finished college, she wanted so much to give her dad a hug and to see the pride in his eyes. Instead, having achieved their shared goal, Marissa simply glanced in heaven’s direction and said, “Daddy, we did it!”

Like her father, Marissa now plans to join the military and serve our country.

This year, Marissa is one of 499 students receiving a college scholarship from Freedom Alliance to honor their parent’s military service and sacrifice and help them achieve the dream of a college education. Jason Bertolino is another scholarship recipient. He is the youngest of four kids and was six years old when his father – Army SSG Stephen Bertolino – was killed in a convoy ambush in Haditha, Iraq on November 29, 2003. In December, Jason graduated from Utah Valley University with a major in hospitality management. Jason’s family has a history of military service, and his father was remembered as someone who would go out of his way to help another person in need.

The National Mall in Washington, D.C. does not yet bear a monument to those who sacrificed their lives in Operations Enduring Freedom or Iraqi Freedom. The most visible memory we have of these men are their children. The kids of Iraq’s and Afghanistan’s fallen heroes are approaching college age, and the greatest number of them will complete their undergraduate studies over the next ten years.

Infantrymen are young – in Afghanistan and Iraq, 75 percent and 79 percent, respectively, of those who gave their lives were aged 30 or younger. The largest number of U.S. casualties in Iraq occurred from 2004-2007 with an average of 855 Americans lost per year and their kids are approaching college age. The highest U.S. casualty rates in Afghanistan occurred during 2009-2012, averaging 385 per year.

Many of the students who receive scholarships from Freedom Alliance allow us to become part of their lives and offer guidance as they navigate a challenging and confusing time in their lives.

These kids hold onto the memory of their fathers in creative ways. One proud daughter saved her dad’s last phone message so she can remember the sound of his voice. Some memorialize their loss with a tattoo of his name or the date he was KIA. On special days, like today, they’ll pull the dust cover off the Harley that’s still in the garage. They’ll drink their dad’s favorite soda pop or work out to his favorite music. The photo album will be pulled from the shelf, or a phone call placed to an aunt or an uncle. They’ll reminisce, fight back the tears, and try to imagine what life would have been like if the deployment had ended just two weeks earlier or if the IED had failed to detonate.

Even after many years, the hurt remains. The void is still great.

They visit their dad’s final resting place, which is difficult, but cathartic. I’ve been invited to sit with sons and daughters at their fathers’ graves, and while that is one of the greatest honors of my life, I wish, for their sake, I had never had such an experience.

Father’s Day is a time for Gold Star children to remember their personal hero – the guy who was larger than life – and pay tribute to the inspiration he provided in their young lives.

Marissa Ridgley told us how she finished college saying, “I didn’t do it alone.” She explained, “My father [was] living in my heart, inspiring, encouraging, and motivating me on a day-to-day basis to keep going.”

Our nation’s Fallen Fathers may be gone, but they’re not forgotten, and they continue to inspire.

Tom Kilgannon is the President of Freedom Alliance, a nonprofit organization that provides support to America’s military families and advocates for a strong national defense.