U.S. Navy veteran Adone "Cal" Calderone waves Thursday to a crowd of family and friends from his front porch on Corniche Street NW in Jackson Township. The World War II vet and Pearl Harbor survivor celebrated part of his 100th birthday party with about a dozen folks outside of his home. (CantonRep.com / Ray Stewart/TNS)
June 15, 2020 Steven M. Grazier - The Repository
Share
Tweet
Flip

Adone “Cal” Calderone didn’t hesitate for a second when asked the secret to reaching 100 years old.

As Stark County’s last known living Pearl Harbor survivor, Calderone celebrated Thursday in front of about a dozen family and friends who turned out for a surprise birthday bash in his honor. 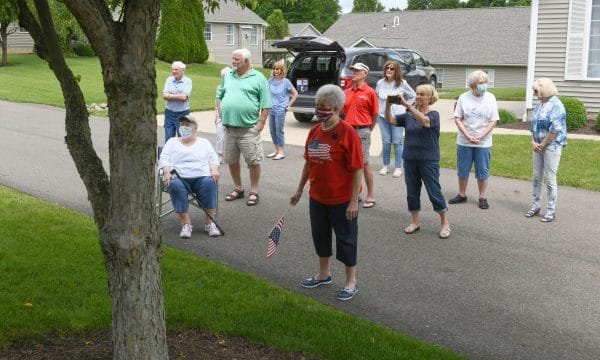 The party saluting the six-year, U.S. Navy veteran was held outside of his Corniche Street NW home.

“It feels good to be 100,” the former chief petty officer said, as he stepped off the front porch to greet folks in the street. “It’s so nice, very nice.”

Calderone acknowledged being slightly confused much of Thursday morning, prior to heading out to meet the crowd. He said his wife of 75 years, Carrie, and son, Greg, were tight-lipped. 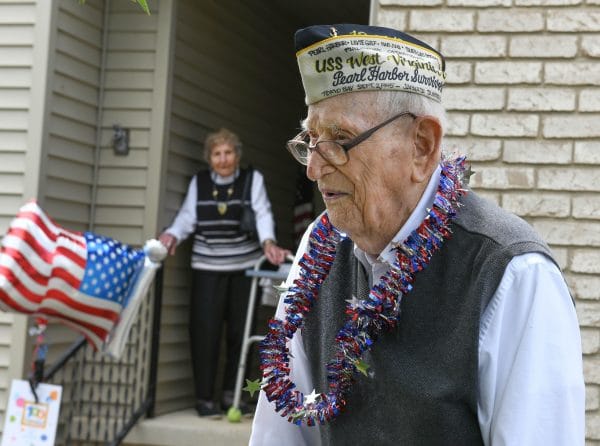 U.S. Navy veteran and Pearl Harbor survivor Adone “Cal” Calderone talks Thursday about his military service from his front yard, as his wife, Carrie, looks on from the porch. Calderone celebrated his 100th birthday on Thursday with a contingent of family and friends. (CantonRep.com / Ray Stewart/TNS)

“Not many were saying much to me,” said Calderone, who grew up in Niles and has lived in Stark County for nearly 15 years.

On the morning of Dec. 7, 1941, Calderone was a 21-year-old sailor serving on the U.S. Navy vessel, USS West Virginia, at Pearl Harbor, Hawaii, when the Japanese flew over and killed a total of 2,403 military personnel and civilians. Another 1,178 people were wounded. 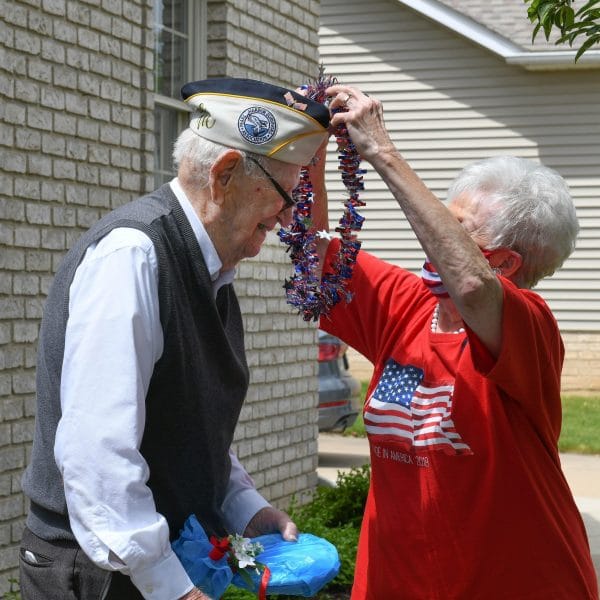 His ship was hit by eight torpedoes and four bombs from the Japanese air attack, all which occurred moments after Calderone finished his morning breakfast.

He was trapped after the bombing, wounded and briefly hospitalized.

“I took some shrapnel to the face,” Calderone recalled while pointing to a small scar near his left cheek. “They (the doctors) wanted to keep me longer. I wanted to get back out there.”

A musician, Calderone was in the USS West Virginia’s band, playing the tuba and string bass. He later served as a musical conductor in the Navy. 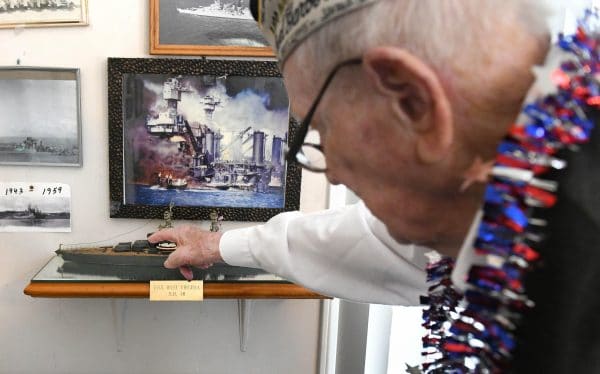 Pearl Harbor survivor Adone “Cal” Calderone, who turned 100 years old on Thursday, keeps a model of the USS West Virginia inside his Jackson Township home. He was serving on the vessel when it was struck by Japanese fire on Dec. 7, 1941. CantonRep.com / Ray Stewart/TNS)

Calderone joined the Tennessee band performing on the neighboring ship, USS Arizona, the prior evening. After the performance, his request to a supervisor to spend the night was denied because he had an 8 a.m. drill on the West Virginia.

“I wanted to stay and (socialize),” he said.

Today, Calderone enjoys sharing his memories from World War II. He’s active at home, walks with a cane and still drives, according to son, Greg Calderone.