The coronavirus may cancel concerts and close down businesses, but it can’t call off Jim Thompson’s birthday.

That was the message from a sea of well-wishers Tuesday morning at Turtle Creek Club in unincorporated Tequesta. An estimated crowd of more than 100 vehicles drove through the neighborhood, waving to Thompson and wishing the World War II veteran a happy 100th birthday. 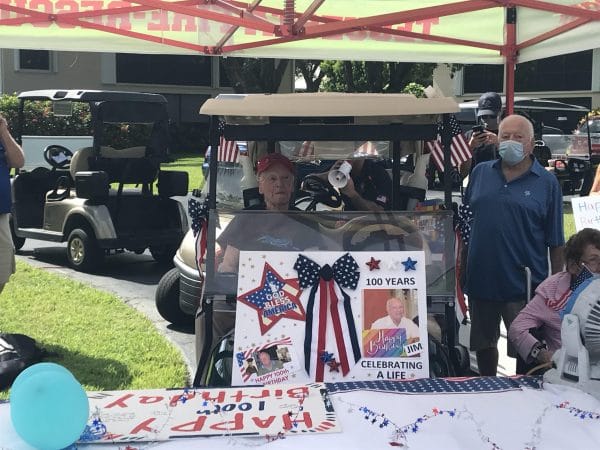 “Surprised? That’s an understatement of the century,” Thompson said.

Among those who drove past were Tom and Terry Farina. Terry Farina stood up through the sunroof of a red sedan and held a sign while her husband drove.

Tom Farina, 82, was among those who shared stories of Thompson’s golfing exploits before the parade started from a nearby parking lot. He guessed he first met Thompson about 20 years ago.

“He hits his driver off the fairway,” Tom Farina said. “Not many people do that.” 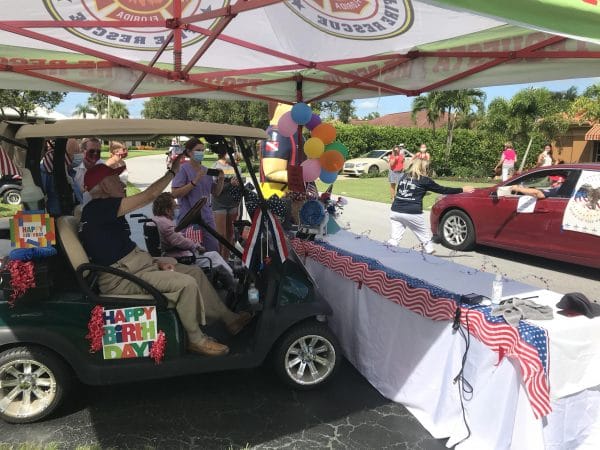 His wife added that Thompson is a top-notch guy off the course, too.

Another friend, Geneva Hochstetter, described him as “high-integrity.” Ray Ingram, who said Thompson was one of the first people he met after moving to the area some 30 years ago, called his friend “just a good all-around guy.”

“Look at all the people who love him,” Terry Farina said. “And there’s more.”

Among the crowd were some who didn’t even know Thompson, but said they felt compelled to pass along their gratitude for his military service and send him love on his birthday. 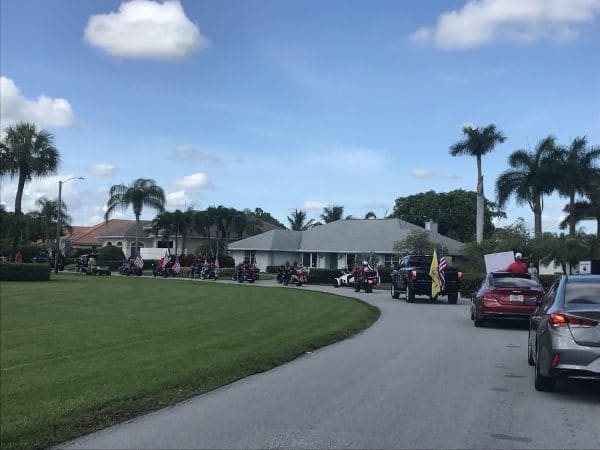 One, 62-year-old Donna Tabor, said she lives in a condo right behind Thompson. She wore a bedazzled patriotic hat and zipped around on a golf cart outfitted with red, white and blue streamers.

“I just appreciate him … Especially now with all the bad stuff going on, this is a great way to start the day,” Tabor said.

Thompson, married to wife Evelyn with two sons, was born in Wheeling, West Virginia, before he joined the U.S. Navy and U.S. Marine Corps. His stint in the military brought him to Guadalcanal in the Pacific Ocean as well as Pensacola. Thompson graduated from Ohio State University and worked in banking.

Thompson’s never been one to flaunt his military record, Ingram said, but remains proud of his service as the decades have gone by.

His surprise parade came about after McGovern, a Tequesta Fire Rescue lieutenant who met Thompson through Honor Flight several years ago, heard that his friend’s birthday plans were cancelled because of the pandemic.

“I kind of played along with it but in the background I was planning this whole big parade for him because there’s no way a World War II veteran turning 100 years of age is not going to have a birthday party,” McGovern said.

After the last car drove past, McGovern joked with Thompson, telling him that “you’re going to be opening cards for the next 100 years — seriously.”

For his part, Thompson said he was touched by the outpouring of support.

He sat in the shade atop a throne-like golf cart as the cars, golf carts, motorcycles and bicycles moseyed past. A nearby sound system pumped in patriotic songs like Lee Greenwood’s “God Bless the USA.” A bagpipe player performed “America the Beautiful” at one point.

When asked about his reaction to the morning’s events, Thompson looked down and shook his head with gratitude.

“It was just really overwhelming to me.”