An evening run turned into a lifesaving event on June 9 thanks to Lt. John Miller, who is assigned to Navy Warfare Development Command, Naval Station Norfolk.

At 6 p.m. on June 9, Miller was running near the cruise ship Spirit of Norfolk, along the Elizabeth River Trail, when he rounded a corner and saw a man with a child in a wheelchair on the edge of the seawall.

“I turned the corner and proceeded north,” Miller said. “I was about 10-15 yards along the length of the cruise ship when I heard a splash. I turned and the man and the child were gone, leaving the empty wheelchair. I sprinted back to the edge and initially saw only the man, who appeared to be floundering.” 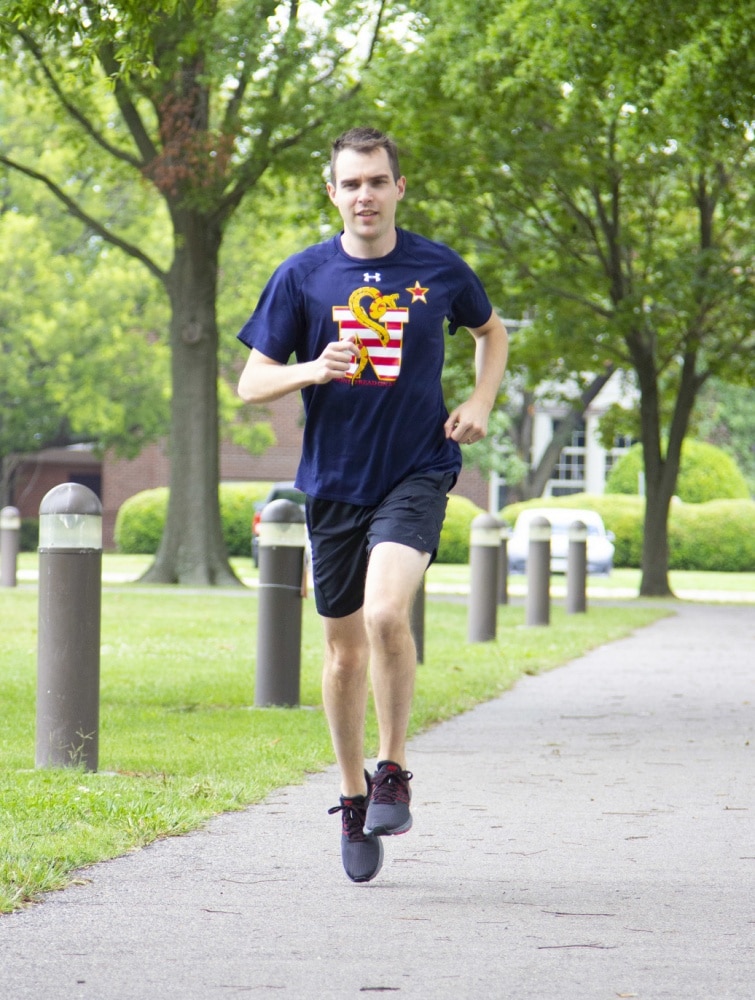 Lt. John Miller is credited with saving two lives while on an evening run near his residence. He is assigned to Navy Warfare Development Command, Naval Station Norfolk. (U.S. Navy photos by Ian Delossantos, NWDC/Released)

Miller quickly asked another jogger to go for help and jumped 10 feet into the water, pulling the man and the child to the seawall.

“I immediately realized it was covered in barnacles, making it impossible to grip, so I reached overhead and grabbed a line from a cutaway bumper and wrapped it around my right arm,” he said. “I had the man wrap his legs around me with the child safely in between us as I was concerned about the man being overly fatigued or cramping. I assumed that we would wait out rescue.”

At that point, a woman on land above informed them that there was a ladder 10-15 yards down the seawall. The child was non-verbal, so Miller decided to swim for the ladder because he did not know how much water the child consumed.

“We swam in tandem down the seawall and then I assisted the man and child to get up the ladder,” Miller said. “The woman who called 911 brought the wheelchair down the pier and we were all out the water by the time the police arrived.”

The police left the area as responders from Norfolk Fire Station One were on the scene attending to the rescued pair.

Miller said he had no reservations or hesitation about the rescue. “In the moment, I didn’t even consider an alternative. Treading and swimming with another person is difficult, but I was in the water before I knew it. Perhaps, I should have paused and located the nearest ladder or a life ring, but I knew that everything was time critical. I cannot actually process the feeling I had; I just felt an immense pressure to act. I knew he could not survive the water with his disability, so I had no choice. I did not know the water skills of his guardian and I could not be sure of any possible injuries or trauma to either of them. I had to act.”

Miller says the real hero was the child’s caretaker, who immediately jumped in, then got help from others in the vicinity. While the caretaker took the first step, Miller provided crucial and lifesaving back up with immediate relief, and a bystander called for help and located a ladder. “If one person is missing from that chain of action, it may have turned out badly,” Miller said.

Miller, who is from Kinsman, Ohio, has been in the Navy for 9 years. He resides in downtown Norfolk with his spouse, Taylor and his dog. His advice to someone in a similar situation is influenced by what he learned from one of his mentors.

“At the beginning of my military career, now Major Clayton Jarolimek, USMC, said to ‘always place yourself at the point of friction, where you can maximize your influence on the outcome.’ I try to do that every day in everything that I do. It does not change when I take off my uniform, go home, and enter my local community. At that moment, the point of friction was in the water, so into the water I went.”

“People of strength and in positions of power must always look out and fight for those who cannot defend and protect themselves,” Miller said. “The relationship between the man and the child represents that fundamental truth. One act or event pales in small comparison to the years of selfless love, patience, and care provided to that child. I would thank the man and the child’s mother and deliver the child a couple balloons if I run into them again. I’ve heard they make his day.”