When SpaceX launches its ninth batch of Starlink communications satellites early Saturday morning, there will be a group of weather officers on the ground making sure everything is good to go for launch, just like for every launch from the Space Coast.

But for the first time, the weather officers from the 45th Space Wing Weather Squadron working this launch are all women.

“Our flight commander, Capt. Fontenot, he put together the crew and was like, ‘Wow, all of these launch weather officers and all of these personnel are female. Wouldn’t this make a great story?’ And I was like, ‘yes!,'” Launch Weather Director Capt. Nancy Zimmerman told reporters Thursday morning at the Cape Canaveral Air Force Station’s Morrell Operations Center. 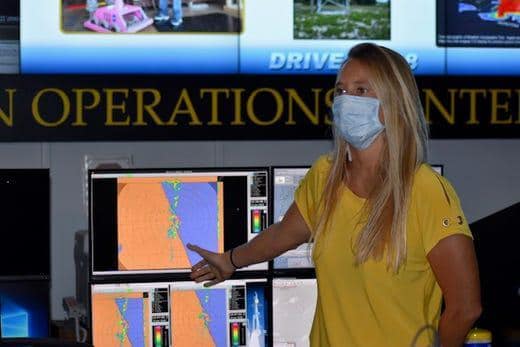 Operating since the early 1990s, the weather squadron at the 45th Space Wing, which is composed of both active-duty military members and civilians, had been primarily made up of men. But over the years, more women have joined the ranks.

There are currently 47 members in the weather squadron, 11 of which are women. In the launch weather team, there are 17 qualified members, of which eight are women.

For Saturday’s launch, which is forecasted at 70% “go,” according to the 45th Weather Squadron and is scheduled to liftoff at 5:21 a.m. from Cape Canaveral Air Force Station Launch Complex 40, there will be six main weather positions manning the launch.

Maj. Emily Graves will be the Launch Weather Commander, meaning she will give the final “go” for launch if all weather conditions have cleared.

Zimmerman will be the Launch Weather Director who will oversee the entire team on launch day.

Arlena Moses will be the lead launch weather officer, the person assigned to that particular launch vehicle and who has been coordinating with the launch customer, in this case, SpaceX, for weeks leading up to the launch. Moses also is the one who provides the daily forecasts for launch day.

“I always wanted to be a meteorologist,” Moses, who joined the weather squadron about six months ago said. “I dressed up for career days in elementary school as a TV meteorologist from the local channels … I loved working for the National Weather Service but I’ve also always loved space and astronomy and anything related to that, so when this opportunity came up, of course, I took it.”

Melody Lovin will be the Reconnaissance Launch Weather Officer, the person who looks at the data from the weather balloons and the 45th’s weather aircraft.

Jessica Williams will be the Radar Launch Weather Officer who will assist Moses on launch day as well as analyzing the radar and lightning data.

According to Lovin and Williams, the radar launch weather position can be one of the busiest positions on launch day, especially if weather is bad.

Though the women will be operating in these specific roles for this launch,they are trained to fill any other role and are constantly being rotated for every launch.

“If you just think about how cool it is to say that I help launch rockets and I’m one of the people that if the conditions warrant, I can stop the launch,” Moses said. “It’s amazing in terms of both the responsibility and kind of just the cool factor that says I can stop launches.”

Germany confirms US eyeing troop cuts despite concerns over Russia