After two straight nights of looting in Chicago, the scene almost seemed normal.

A man waited across the street as officers sped down Division Street and scattered looters from a Target store that had its glass doors shattered.

After the last unmarked police SUV drove away around midnight Monday, the man walked into the Wicker Park Target and spent several minutes inside. He came out with just one box of beer and passed it around to a handful of others standing outside.

With downtown Chicago cordoned off by the National Guard, violence spread into the neighborhoods Sunday night and early Monday as clashes with police continued after the death of George Floyd while under arrest in Minneapolis last week. 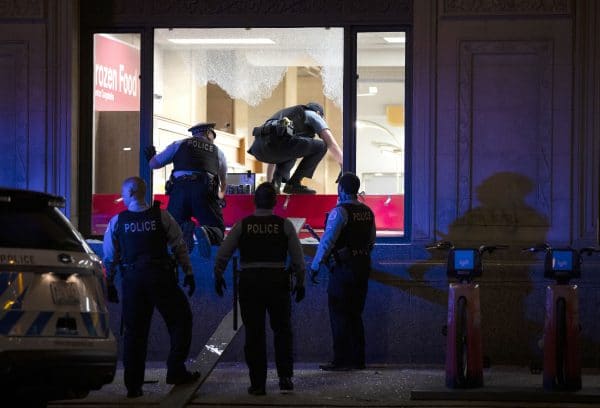 Floyd, a black man, died May 25 after Minneapolis police officer Derek Chauvin, who is white, was captured on video pushing his knee into Floyd’s neck despite Floyd’s protestations that he was unable to breath.

Throughout the night, police received call after call of lootings, shootings and fires on all sides of the city. There were several “10-1\u2033 calls for officers in immediate need of help. It capped a weekend that was one of the most violent in recent years in Chicago, with more than 80 people shot, nearly 20 of them killed.

Police Superintendent David Brown said there were 699 looting arrests, mostly on the South and West sides. At least 132 officers were injured on Sunday and there were 48 shootings, with 17 deaths, he said. Chicago officials said they received 65,000 calls in a 24-hour period, 50,000 more than typical day. 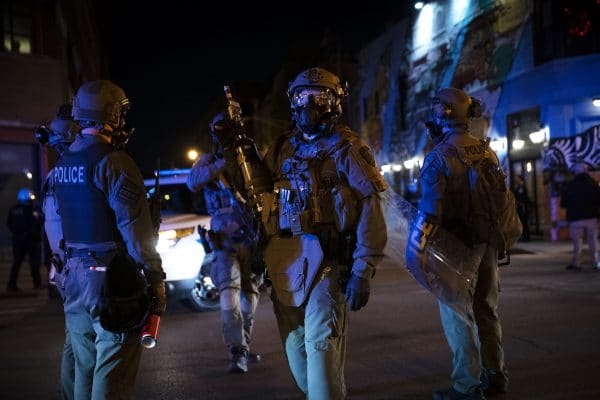 In the Old Town neighborhood, a modest-sized group of protesters met with police around 9 p.m. Sunday at North Avenue and Wells Street. The demonstrators were peaceful and some sat down in front of the police line on Wells. They chanted, “I can’t breathe,” “No justice, no peace” and “Black lives matter.”

“This is the Chicago Police Department,” played over a bullhorn. “You are in violation of the curfew law.”

Around 9:30 p.m., officers wearing gas masks and canisters arrived and the protesters shouted “This is a peaceful protest!”

“I’ve already been tear gassed,” said one protester on a bike. “It’s not that bad.”

But no one was sprayed. After police gave a fourth warning, many in the crowd walked away from the intersection. Several others were taken into custody. 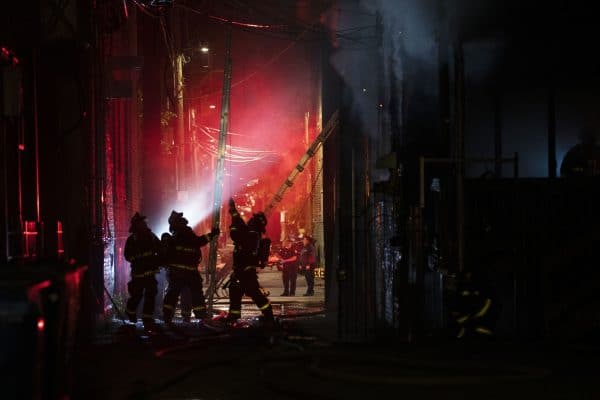 Firefighters work a fire in a building in the 1000 block of Foster Avenue in the Edgewater Beach neighborhood on June 1, 2020.
(E. Jason Wambsgans/Chicago Tribune/TNS)

There were no more organized protests the rest of the night. Plenty of reminders were left behind: handmade signs and graffiti like “ACAB” — “all cops are bastards” – or “George Floyd” written on walls and benches.

Some residents stood outside to guard their neighborhoods and deter looters. Some stores hired security. Some boarded up their windows with plywood. Latin Saint gang members chased off looters in the Back of the Yards neighborhood, Ald. Raymond Lopez of the 15th Ward claimed in a tweet.

But the looting continued.

In the Logan Square neighborhood, police officers and looters met each other throughout the night near Diversey Avenue and Kimball Avenue. Cars would line on Kimball and people would walk or run into the Foot Locker, then come out carrying boxes of shoes. 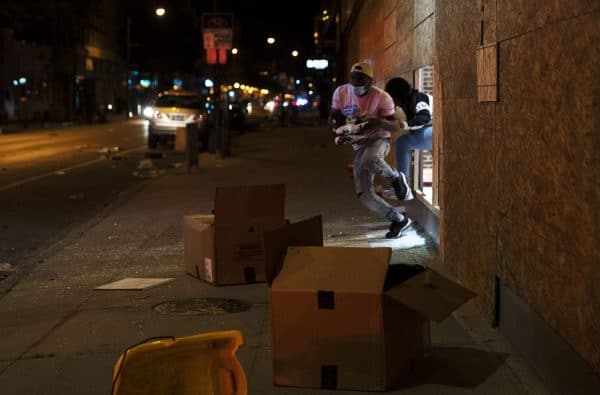 Looters make off with shoes from a show store on Milwaukee Avenue in the Wicker Park neighborhood on June 1, 2020.
(E. Jason Wambsgans/Chicago Tribune/TNS)

Officers would ride up to the scene, flashing their lights and shining a spotlight on the looters, who would jump back into their cars and drive away or wait it out. Many of them came back again and again. At one point, several loud reports — possibly gunshots — were heard nearby, causing the officers to leave the scene as quickly as they had come. The looting continued.

“They’re our usual looters. Just let them go,” an officer said around 1:30 a.m. over the police scanners in response to another call of looting in the area.

Fires also occurred throughout the night, although it was not clear which were set. 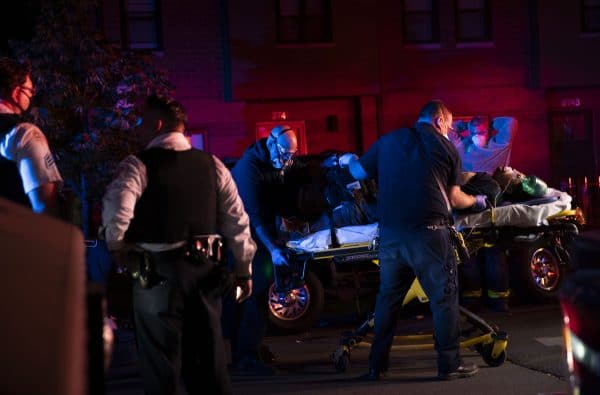 Paramedics tend to one of two gun shot victims in an incident on the 2700 block of W. Haddon in the Humboldt Park neighborhood on June 1, 2020.
(E. Jason Wambsgans/Chicago Tribune/TNS)

A firefighter was injured in a large building fire at 306 E. 47th St. in the Bronzeville neighborhood earlier in the night, according to the Chicago Fire Department. A ceiling collapsed on the firefighter, who was taken in a hospital in fair condition. The fire was put out by 9 p.m.

Around 2:30 a.m., a residential building near Foster Avenue and Kenmore Avenue in the Edgewater Beach neighborhood caught on fire. Neighbor Felicity FitzGerald, 25, said she was about to go to bed when she saw the flames outside her window. She called 911 and then headed outside to the alley behind her building.

“The fire was so bright my whole entire room was lit up,” she said. 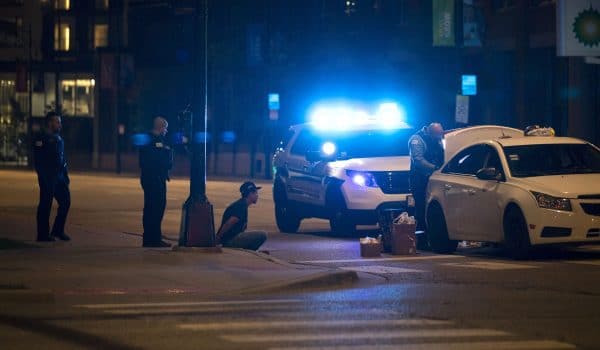 Before firefighters arrived, she saw one man in the alley trying to use a fire extinguisher to put out the flames, she said. A video she took of two firefighters holding a hose shows electrical wiring above them popping with sparks, causing one of the firefighters to fall to the ground. By 3 a.m., most of the fire was contained but the building appeared to be destroyed.

FitzGerald hoped the fire wasn’t related to the protests. “I understand the protests, and I plan to join myself,” she said. “If this is related, that would be evil. I really hope everyone is okay.”