Police officers have watched from skirmish lines as protesters and others stole from businesses, threw rocks, ignited fires and bashed in streetlights with skateboards.

More than 1,000 were arrested in Los Angeles alone over the weekend, but officials said they have not given up on tracking down others.

The Los Angeles Police Department has been collecting evidence throughout the protests in recent days over the death of George Floyd, mostly in the form of video footage that could be used to identify individuals and bring charges against them in the future. 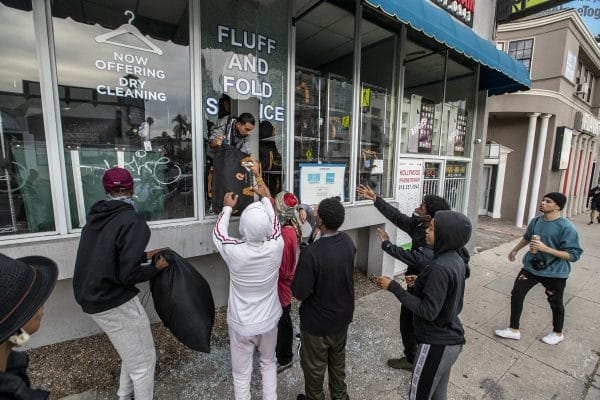 Hollywood, CA, Monday, June 1, 2020 – Looters steal bundles of clothes from a laundry on Highland Ave. as hundreds of protestors demonstrating against police brutality and the death of George Floyd pass by. They were shoed away by some protestors. (Robert Gauthier/ LA Times/TNS)

The FBI on Monday put out a nationwide call for pictures and videos that could help identify people “actively instigating violence” at protests across the country decrying Floyd’s death at the hands of Minneapolis police.

This strategy has been used in the past, including during melees that followed Lakers victories in downtown Los Angeles, as well as in other cities that have experienced unrest, such as Baltimore.

But it is also generating concern.

Nikhil Ramnaney, head of the union that represents Los Angeles County public defenders, expressed concern that funneling footage to local law enforcement agencies or the FBI in the hope of catching looters could allow law enforcement to use facial recognition technology to identify peaceful protesters in the area. 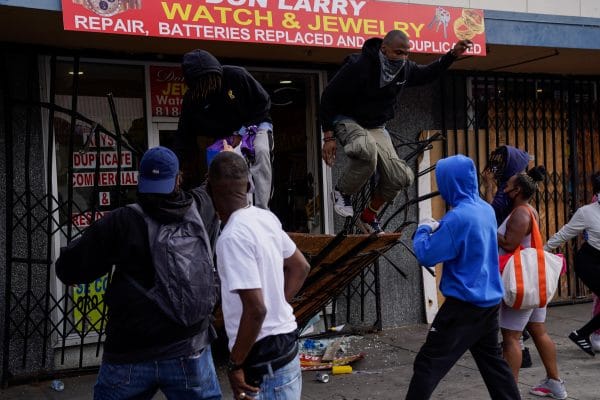 VAN NUYS, CA – JUNE 1: People looting a watch and jewelry store on Monday June 1, 2020 in Van Nuys, CA. Protests erupted across the country, with people outraged over the death of George Floyd, a black man killed after a white Minneapolis police officer pinned him to the ground with his knee. (Kent Nishimura / Los Angeles Times/TNS)

“If government agencies are stockpiling large repositories of film, in light of what’s going on with widely available facial recognition technology, I wouldn’t be surprised if those technologies were used on those crowd-sourced contributions,” he said. “If you’re sourcing footage from people, you could pull metadata from that footage that could also tell you who was present at that scene.”

Jay Stanley, a senior policy analyst for the Speech, Privacy and Technology Project at the ACLU, said the FBI “should also seek video of wrongdoing by police officers” if it is gathering video from protests.

“There have been plenty of reports and videos of abusive police and National Guard behavior,” he said. “They shouldn’t retain any video of people exercising their 1st Amendment rights who aren’t breaking the law.”

Police have acknowledged missteps and said they are already investigating at least one incident in which onlookers recorded a police vehicle driving into protesters before speeding away. 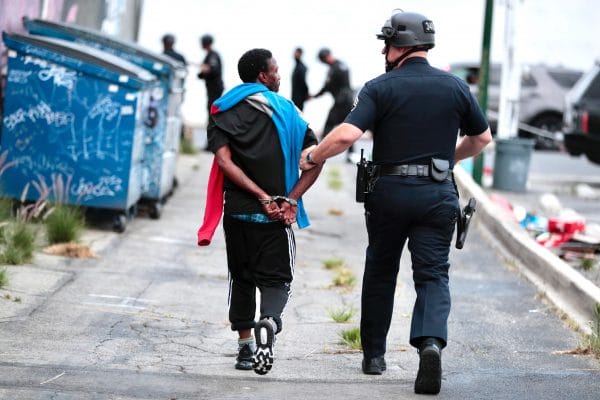 An LAPD officer arrests a suspected looted in an alley behind a Hollywood Blvd. store. (Robert Gauthier/ LA Times/TNS)

While not every cop on the street was wearing a body camera in recent days, as specialized units don’t have them, thousands of officers in areas with severe looting and vandalism were wearing them and recording hours of footage, said Josh Rubenstein, an LAPD spokesman.

Police also have been provided footage from residents and business owners, not to mention the slew of images they can access on social media and in other media.

“Where it’s being brought to our attention, or where we are able to capture any evidence of people committing crimes, that is being captured for further investigation,” Rubenstein said.

Most of the protests over Floyd’s death, which occurred after former Minneapolis police officer Derek Chauvin held a knee on Floyd’s neck for more than eight minutes, have been peaceful. But some have taken a darker turn as looters have used the marches as cover to steal from stores. 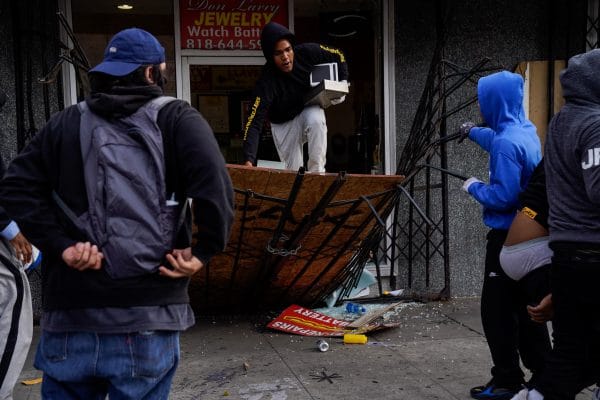 VAN NUYS, CA – JUNE 1: People looting a watch and jewelry store on Monday June 1, 2020 in Van Nuys, CA. Protests erupted across the country, with people outraged over the death of George Floyd, a black man killed after a white Minneapolis police officer pinned him to the ground with his knee. (Kent Nishimura / Los Angeles Times/TNS)

Arrest records reviewed by the Los Angeles Times show the LAPD booked just 14 people on looting-related offenses on Friday and Saturday, even as dozens of stores downtown and in the Fairfax district were being pillaged both days. On Sunday, more than 120 people were taken into custody for looting, records show. Hundreds of people also were arrested for violating nightly curfews put in place by Mayor Eric Garcetti in an effort to quell the unrest.

Officials have said those intent on causing harm or stuffing their pockets and cars with stolen goods took advantage of the legitimate protesters, using them as cover. The more successful those individuals were in stealing, and the more violent they were in their destruction, the more likely it is they will be pursued in coming investigations.

Law enforcement officials said they are likely to focus on major crimes that caused extensive damage or injuries, and on individuals who committed multiple crimes or were part of a group committing multiple crimes. But they also could choose to charge and prosecute others whose actions were brazen or cruel.

Many people wore masks, but others did not. And even those with a mask on in one video may be identifiable in another, in a moment when they let their mask down.

Similar work is likely to be conducted by other agencies beyond Los Angeles.

Officials in Long Beach placed the blame for looting that marred an otherwise peaceful protest Sunday in the city’s downtown area on “organized criminals” who had been “hitting other cities” in the area, according to Mayor Robert Garcia.

Long Beach police arrested 75 people on Sunday, many for violations of a citywide 8 p.m. curfew. But both Garcia and city Police Chief Robert Luna promised to work with federal partners to review surveillance footage to track down looting suspects in the future.

“There were a whole lot of cameras out there,” Luna said Monday. “If you were looting and we have your license-plate number and your face, we’re gonna come after you.”

Some residents and business owners said they welcome such work by police, because outsiders who drove into their neighborhoods and destroyed storefronts should be held accountable and were not over the weekend. Some say police stood by and did nothing as looters destroyed businesses already on the brink of closing for good after being shuttered for weeks due to the COVID-19 pandemic.

Steve Soboroff, a member of the civilian Police Commission that oversees the LAPD, said he understands people’s frustrations that there was a lack of police presence as some crimes were occurring over the weekend. But, he said, police were in a difficult position and had to pick their priorities, and LAPD Chief Michel Moore rightly prioritized lives and keeping people safe over confronting every looter.

“The job of the department, of the chief, is a high-wire act right now. There’s not a lot of space in there to do it right,” Soboroff said. “What’s wrong is over-policing, and what’s wrong is under-policing.”

But people in Los Angeles should know that in terms of holding accountable those who abused legitimate protests for their own criminal means, the battle is not over, Soboroff said.

“Arrests aren’t over just because a person isn’t out there anymore,” he said. “I don’t think the department is going to make a decision to say, ‘OK, let’s just forget about all that and start over,’ because you saw some really dangerous stuff.”

Returning to investigate and prosecute crimes at a later date, when the department isn’t stretched thin and officers aren’t in dangerous situations, makes sense, Soboroff said.

In an era of smartphones and pervasive government and business surveillance systems, using footage to retroactively target criminals who escaped immediate arrest in moments of widespread unrest is not without precedent.

In 2015, after looting and arson broke out in Baltimore following the death of another black man, Freddie Gray, from injuries suffered in police custody, the Baltimore Police Department formed a task force to identify suspects. Multiple federal agencies lent a hand, including the FBI, the Drug Enforcement Administration and the Bureau of Alcohol, Tobacco, Firearms and Explosives.

In the following weeks and months, officials brought charges against people for burning down a CVS, burning down a liquor store, slashing a fire hose and looting pharmacies. Some were sentenced to years in federal prison.

“When the evidence proves that criminals destroyed property and jeopardized lives, they must be held accountable,” said Rod Rosenstein, at the time the Maryland U.S. attorney, after the man who burned down a liquor store was sentenced to five years in prison and ordered to pay $380,000 in restitution.

Multiple federal agencies said they stand ready to assist local law enforcement in Los Angeles and other localities as well.

U.S. Attorney Nicola Hanna said federal prosecutors in Los Angeles are “confronting this outlaw behavior” by working with the FBI and local police “to identify cases in which federal charges could be appropriately filed.”