Gov. J.B. Pritzker announced he is deploying Illinois National Guard troops to the suburbs as two people died during disturbances in Cicero and armored sheriff’s vehicles rolled down the main street of Naperville.

The activation of about 250 additional troops comes after governor ordered 375 service members, all of whom have training as military police officers, to help with crowd control in Chicago, where looting continued Monday as a large, mostly peaceful crowd gathered in Uptown.

The CTA suspended service overnight because of the continuing tensions. Its trains and buses began running again at 6 a.m. Tuesday but not in the downtown area, which remains restricted after the widespread looting over the weekend. 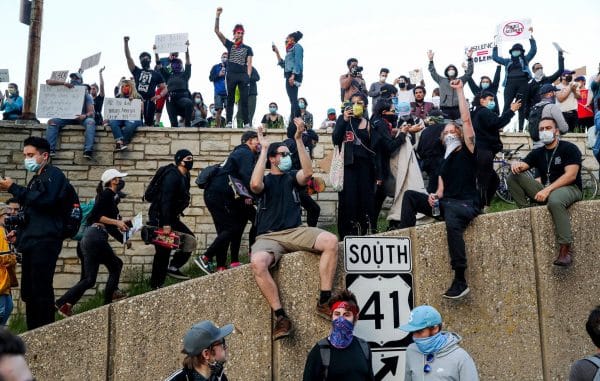 Metra will be out of service for a second day on Tuesday. The transit agency said it may resume service Wednesday, but on an alternate schedule.

Chicago Mayor Lori Lightfoot has scheduled a news conference for 10 a.m. You can watch it live here.

Here are the latest developments:

6:15 a.m.: Chicago police and city leaders defend handling of protests and looting as questions swirl over response some found lacking

For some three hours on Sunday, the officers stood in a long row on Pulaski Road, a line of blue visible from blocks away. 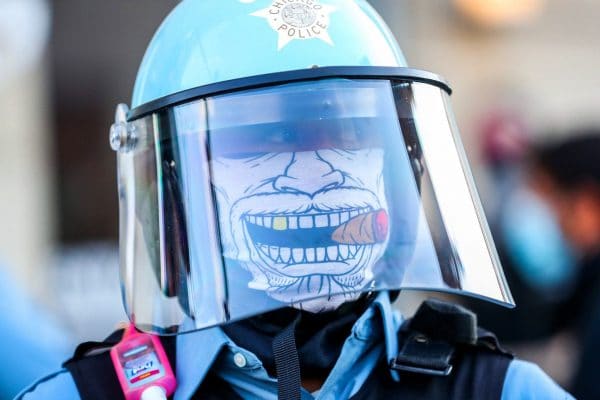 A Chicago police officer watches over a large gathering of protesters in the 4400 block of North Broadway during a march, June 1, 2020.
(Armando L. Sanchez / Chicago Tribune/TNS)

They wore face shields, many flipped up to reveal expressionless faces. The lights of idling police vehicles flickered at their backs.

All the while, the officers did not intervene. Read more here. — Annie Sweeney, Gregory Pratt and Jeremy Gorner 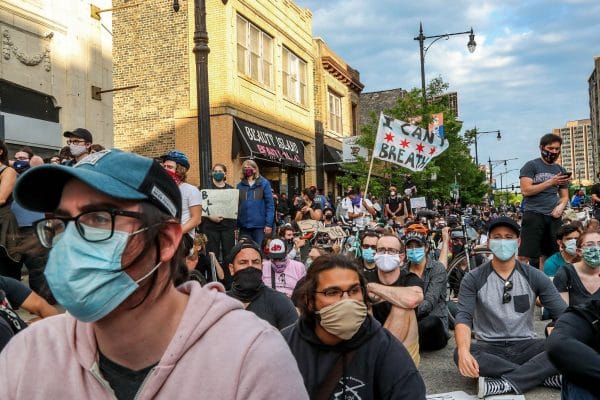 Protesters sit in the 4400 block of North Broadway during a march, June 1, 2020, in Chicago.
(Armando L. Sanchez / Chicago Tribune/TNS)

6 a.m.: Sparked by death of George Floyd in Minneapolis, protests in Chicago fueled by decades of Police Department problems

George Floyd’s death at the hands of police 400 miles away catalyzed days of street protests in Chicago, but the demonstrations here are rooted in anger over decades of abuse of African Americans by the city’s officers, activists said.

The protests continued a tradition of Chicago activists crowding streets to complain about bias in enforcement, a lack of accountability for officers and police killing black people. 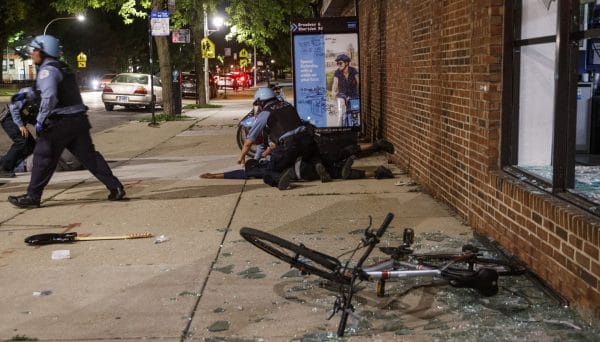 5:50 a.m.: Federal authorities accuse Galesburg man of traveling to Chicago for protests with homemade bombs, charge him with inciting a riot

An Illinois man arrested in Chicago over the weekend had homemade bombs in his car and had been seen on videos posted on the internet participating in the looting and rioting in Minneapolis and Chicago, according to federal charges filed Monday.

Matthew Rupert, 28, of Galesburg, was charged in U.S. District Court in Minnesota with inciting a riot and possession of an explosive device, court records show. Read more here — Jason Meisner