In a moment his victims have long awaited, a 74-year-old former police officer who terrorized California as the Golden State Killer pleaded guilty to more than a dozen murders and a long list of other crimes Monday in a university ballroom turned courtroom.

Joseph James DeAngelo Jr., clad in orange jail clothing and wearing a clear protective face shield, sat onstage at Cal State Sacramento, with cameras projecting his face onto the ballroom wall so all could see, bringing the guilt phase of the Golden State Killer case to a close.

DeAngelo scarcely spoke during the early part of the hearing, only answering questions from Superior Court Judge Michael Bowman in a hoarse “yes” or “no.” 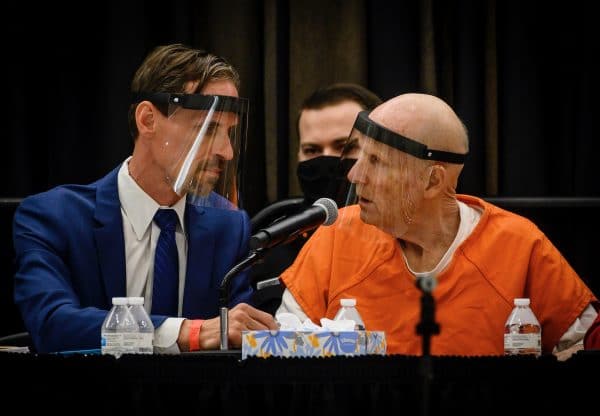 The plea hearing was scripted, allowing no room for ad-libbed confessions. DeAngelo admitted guilt to 13 murders, 13 charges of kidnapping for purposes of robbery — the only crimes he is charged with — as well as some 62 other crimes of rape and abduction for which the statutes of limitations long ago expired.

The crime series ran from at least 1973 to 1986 and involved attacks on 106 children, men and women in 11 counties ranging from Sacramento to Orange. Some 50 women and girls were raped.

“His monikers reflect the sweeping geographical impact of his crime,” Ho said, adding, “each time, he escaped — slipping away silently into the night, leaving communities terrified for years.”

Detectives did not have a final named suspect until 2018, when they used crime-scene DNA and genealogy services to identify the killer’s cousin and then, finally, DeAngelo. 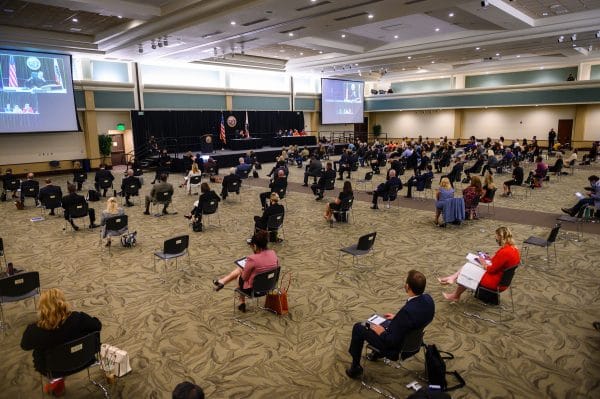 The Sacramento State ballroom was configured for Joseph James DeAngelo’s admission to being the Golden State Killer on Monday, June 29, 2020, with chairs spaced far apart and a stage at one end. Superior Court Judge Michael Bowman sat in the middle, with DeAngelo and his public defenders at right. More than 150 people attended, including DeAngelos victims and relatives of victims, media representatives and prosecutors from all over the state. (Daniel Kim/Sacramento Bee/TNS)

Sitting in a Sacramento County Sheriff’s Department interview room hours after his arrest, Ho said DeAngelo spoke to himself, saying: “I did all those things. I’ve destroyed all their lives. So now, I’ve got to pay the price.”

Prosecutors agreed not to seek the death penalty — the main request made by DeAngelo’s public defenders. In return for his guilty plea, DeAngelo will be sentenced to prison for the rest of his life.

The public will also be spared years of criminal proceedings, which prosecutors estimated could have cost more than $20 million. There will be no need for testimony by scores of rape victims, family members of those murdered and DeAngelo’s three daughters and ex-wife.

Representatives for the counties prosecuting DeAngelo took the stage Monday to read into the record descriptions of the crimes.

They recounted how he would tie his victims up with shoelaces and place dishes on their backs to make sure they didn’t move, the explicit threats and sexual demands he growled into their ears and how he would help himself to food or beer from his victims’ kitchens before or after raping them.

As details about the murders of Greg Sanchez and Cheri Domingo were read aloud, Cheri’s daughter, Debbie Domingo, stood to face DeAngelo.

Jennifer Carole also stood, hands gripped behind her back, as the 1980 bedroom killings of her father and stepmother, Lyman and Charlene Smith, were described. She took off her mask so she could be seen, but did not make eye contact with DeAngelo.

DeAngelo’s whispery voice and wheelchair did not evoke any sympathy from Carole.

“Rest assured, it’s still an act,” she said, echoing the opening statement by prosecutors who said DeAngelo briefly feigned insanity when arrested for shoplifting in 1979 and suggested his statements of an alter ego when he was arrested in 2018 were conjured.

Six family members of Janelle Cruz, DeAngelo’s last known victim, stood together to confront him as he pleaded guilty to murder and admitted raping the 18-year-old.

Cruz was bludgeoned to death in 1986 with what detectives believe was a pipe wrench that had been stolen from the family’s backyard days earlier.

DeAngelo appeared to look down, not returning their gaze.

He again looked down as four relatives of Brian and Katie Maggiore, chased down and shot while taking an evening stroll in Rancho Cordova, stood just feet away from the raised stage where DeAngelo and his lawyers sat.

“How do you plead to that sir?” the judge asked. DeAngelo turned to his lawyer for a prompt, paused briefly before answering, “Guilty.”

All the women who were raped were referred to as “Jane Doe,” a decision that was criticized before the hearing by some who seek to be shed of decades of social stigma over their attacks.

“I don’t want that,” said Kris Pedretti, who was 15 when she became the 10th victim of a serial predator operating in the suburbs of Sacramento and known then as the East Area Rapist. “I want to be seen as a real person that he did this to and not as some Jane Doe.”

The Sacramento County district attorney’s office told Pedretti the decision had been made for her, she said, but conceded her request to be allowed to stand during the hearing when her 1976 attack is mentioned.

“We don’t have anything to be ashamed of, so we can stand up and he can take a look at us,” Pedretti said. “We’re not afraid of him. I think that’s more powerful than us staying seated and being a Jane Doe. Because, if he looks out, he doesn’t know who is who. He will today.”

While details about how DeAngelo had raped her were being read, Jane Carson-Sandler walked up to the edge of the stage to face DeAngelo squarely. He did not look at her.

Other victims silently cried, dabbing their eyes with tissue they had brought with them.

Because of COVID-19 spacing requirements, the proceeding was moved to the ballroom at Cal State Sacramento, the school from which DeAngelo received a criminal justice degree in 1972. The audience was composed almost entirely of victims and their families, with spaces awarded by lottery for 27 members of the media.

Unlike the mock court proceedings held in Sacramento school gymnasiums, the ballroom was not laid out to resemble a courtroom.

The judge, defendant and lawyers faced an audience of nearly 200 and banks of television cameras. Large projection screens displayed the faces of those at the podium, much like at a political rally. The hearing was livestreamed by Sacramento County Superior Court, a national true-crime entertainment network and multiple news programs.

“All that’s missing are the lions,” said one anonymous court official.

There was one notable empty chair in the ballroom — one for Phyllis Henneman, the first-recognized victim of the East Area Rapist. Henneman, who has been battling cancer for the past year, was admitted to the hospital over the weekend.

Nearly 40 victims and family members rose and stood silently to face DeAngelo when it came time to read the charges for the 1976 rape of Henneman.

From beginning to end, the crimes involving DeAngelo played out in the public eye.

The East Area Rapist drew so much media attention that he caused a public panic, prompting citizen patrols, bounties and a run on sales of guns, door locks and guard dogs. Midway through the series of rapes, detectives believe, the attacker began to feed off that public hysteria, and he began to instruct victims to pass on death threats to the police and future victims.

DeAngelo was fired from his Auburn, Calif., police job in 1979 after he was caught shoplifting. The murders that ensued as he and his wife moved to Southern California — again involving bedroom attacks and rapes — at first went unconnected. The unknown assailant was given new local nicknames: the Diamond-Knot Killer and the Night Stalker, later changed to Original Night Stalker after another serial killer took that sobriquet.

Advances in forensic DNA changed the case dramatically. In 2001, detectives were able to link the attacks up and down the state.

Homicide experts said serial killers themselves often have no insight into their crimes, and often blame them on external forces.

“At their core, serial killers are manipulative, egocentric, disingenuous, dysfunctional, unreliable and mean-spirited,” said Enzo Yaksic, founder of the Atypical Homicide Research Group, a national network of law enforcement, forensic psychiatrists and others who study serial killers. “It is their own personalities that lead others to ostracize them, which in turn urges the serial killer to adopt a negative worldview. Serial killers grow accustomed to being on the fringe of society and come to enjoy the duality of their lives.”

The crime spree became media fodder again as a television series, then was picked up by a Los Angeles writer, Michelle McNamara, who rebranded the perpetrator as the Golden State Killer and marketed a book on her attempts to chronicle, and perhaps solve, the crimes.

A 2016 decision by unnamed investigators at the Orange County Sheriff’s Department to break the chain of custody and allow McNamara to take home 37 boxes of case files and two bins of evidence has now become fodder for legal challenges against the law enforcement agency. The defense lawyer for a man serving life in prison for another DNA-solved rape and murder cited the evidence breach to support his own allegations of laxity and misconduct within the county crime lab.

The defense lawyer said McNamara’s research assistant told him the case files were returned to Orange County after McNamara’s sudden death in April 2016, before the release of her book, which has been turned into an HBO series. The first episode aired Sunday, and the series is to conclude just before DeAngelo’s sentencing in August.

Victims have been told to prepare impact statements to be read aloud during proceedings expected to last a week before DeAngelo’s sentence is declared.