Dozens gathered outside the gates of Fort Hood military base in Killeen on Friday demanding answers on the whereabouts of Pfc. Vanessa Guillen, who went missing from the Army post on April 22. [HEATHER OSBOURNE/AMERICAN-STATESMAN/TNS]
June 15, 2020 Heather Osborne - Austin American Statesman
Share
Tweet
Flip

Tears unceasingly spilled down the cheeks of 16-year-old Lupe Guillen while outside of Fort Hood military base on Friday night as she and a crowd of protesters demanded answers for her soldier sister, who was last seen almost two months ago.

“If Vanessa was in front of me right now I would say, from the deepest of my heart, you know even if it takes the last breath of my life I will fight for you forever because you’re my sister,” Lupe cried out Friday.

Pfc. Vanessa Guillen, 20, was last seen in the middle of a work day on April 22 in the parking lot of the Regimental Engineer Squadron Headquarters at Fort Hood. 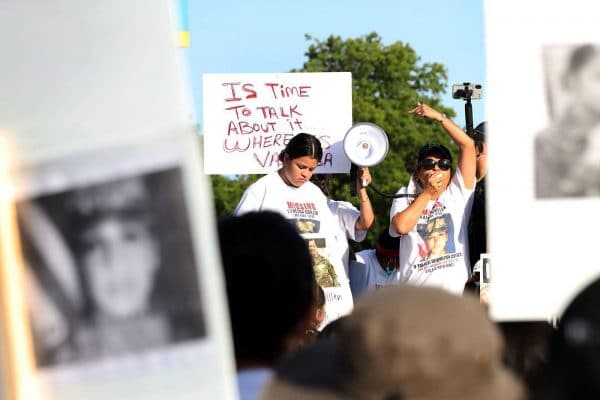 Dozens gathered outside the gates of Fort Hood military base in Killeen on Friday demanding answers on the whereabouts of Pfc. Vanessa Guillen, who went missing from the Army post on April 22. [HEATHER OSBOURNE/AMERICAN-STATESMAN/TNS]

The soldier’s identification card, wallet and the keys to her car and base apartment were later found in the armory room where she had been earlier in the day, Army officials have said.

Fort Hood officials on Wednesday released a statement saying the search continues for the missing soldier. However, another one of Guillen’s sisters, Mayra, during a news conference Thursday said not enough was being done to find her.

Mayra said she wished for the FBI — which is assisting in the search, according to Fort Hood officials — to take over the case from Army investigators.

“I just really hope they are doing their job because, from my point of view, it looks like they are not,” Mayra Guillen said. 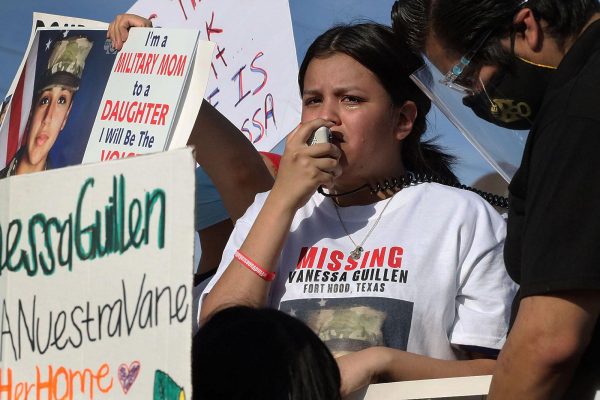 Lupe Guillen, younger sister to missing Pfc. Vanessa Guillen, cries as she calls on Fort Hood officials to find the soldier and return her alive during a protest outside the base on Friday.
(HEATHER OSBOURNE/AMERICAN-STATESMAN/TNS)

Dozens of protesters, many traveling from Vanessa Guillen’s hometown of Houston, gathered at the intersection of North Fort Hood Street and West Rancier Avenue late Friday afternoon as they chanted “We want Vanessa” while holding signs with pictures of her.

Several drivers honked their horns in support of the protesters throughout the event, which was organized by the League of United Latin American Citizens.

While Vanessa Guillen’s family were first reluctant to speculate how she went missing, they are now pointing fingers at her Fort Hood superiors.

Lupe Guillen said her sister had confided to the family that she was being sexually harassed before her disappearance.

Lupe said Guillen’s mother has the name of at least one superior officer who the soldier accused of harassment, but doesn’t want to publicize that information just yet. 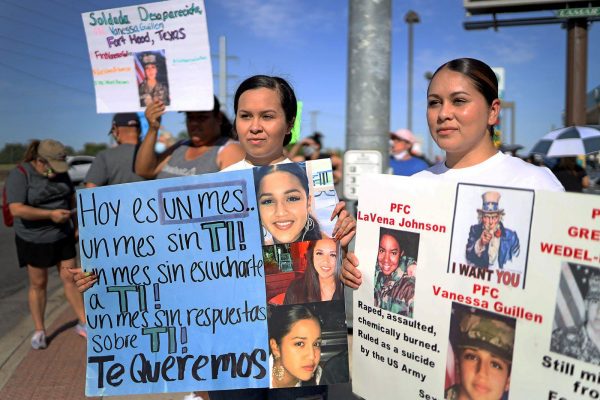 Krysta Martinez, left, along with her sister Kathryn Martinez, were among the dozens of protesters who gathered outside the gates of Fort Hood military base in Killeen on Friday demanding that officials find Pfc. Vanessa Guillen, who was last seen in the Army post on April 22. [HEATHER OSBOURNE/AMERICAN-STATESMAN/TNS)

“No soldier, male or female, should be sexual harassed, abused or raped,” Lupe said. “They are the ones risking their lives for us every day and they should have respect. My sister is not a sexual object.

“My sister was too afraid to talk,” she continued. “Don’t be afraid. We need justice for Vanessa.”

Krysta Martinez, a veteran who was last stationed at Fort Hood, was one of those protesting in front of the base Friday. Martinez said she was also harassed while stationed at the base and, while she did not know Vanessa Guillen personally, she is now fighting for her safe return.

“I’m out here because everything going on here is true,” Martinez said, standing near a Fort Hood welcome sign saying, “The Great Place.”

“Fort Hood is a terrible place,” she continued. “Sexual harassment and sexual assault is a big thing at Fort Hood and there is never any justice. The family needs justice. They need answers.”

Several protesters at the event Friday were Killeen residents who did not know Vanessa Guillen or her family personally.

Marcela Barrera, who has lived in Killeen for more than 45 years, said she has never seen so much support for a cause in her community.

“I heard about her and it touched my heart,” Barrera said. “I’m here to stand up for her and her family. I am here looking for justice for Vanessa.”

While Fort Hood officials are offering a $15,000 reward for information leading to Guillen’s whereabouts, the family is now working to raise even more funds to offer a higher reward and provide more resources to aid in the search.