Cristobal forecast to turn into tropical storm again in Gulf of Mexico, move toward US

Tropical depression Cristobal is dousing parts of Mexico and Central America with heavy rain on Friday and is forecast to strengthen into a tropical storm again as it reemerges into the Gulf of Mexico and moves north toward the U.S. Gulf Coast this weekend.

Cristobal could bring heavy rain, tropical storm force winds and flash floods to those along the U.S. Gulf Coast from Texas to Florida this weekend and into early next week, according to the National Hurricane Center. The tropical storm is forecast to make landfall in Louisiana late Sunday or early Monday. 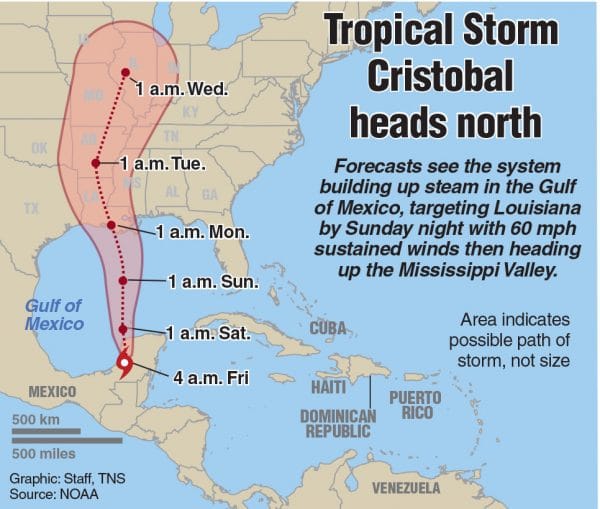 Forecasters say these hazards are expected to arrive “well in advance of and extend well east of Cristobal’s center” with storm surge and tropical storm watches likely to be issued for a portion of the U.S. Gulf Coast later Friday, according to the hurricane center’s 5 a.m. advisory.

Tropical storm force winds might be felt from Louisiana to the western Florida Panhandle this weekend, with a risk of “dangerous” storm surge from Louisiana to the Florida Big Bend, according to the National Hurricane Center. Heavy rainfall is also expected from east Texas to Florida, with flash flooding possible

Regardless of Cristobal’s exact track and forward speed, “the strongest winds, highest storm surge, and heaviest rains could be well removed from the center of circulation,” according to forecasters. That means that the storm’s worst conditions might occur far from where its center is located.

Tropical depression Cristobal has completed a “slow counter-clockwise loop” over southern Mexico and is about 80 miles south-southeast of Campeche.

The storm, which remains inland, is moving toward the north near 7 mph with maximum sustained winds of 35 mph (with higher gusts) and is expected to move over the Yucatan Peninsula and later move back into the Gulf of Mexico late Friday, according to the National Hurricane Center.

Little strengthening is expected while Cristobal remains on land. But the storm is forecast to bring additional heavy rain over far southern Mexico, portions of the Yucatan Peninsula and along the Pacific coast from Chiapas to Guatemala and El Salvador Friday and Saturday, with widespread life-threatening flash floods and mudslides possible, according to forecasters.

Since Saturday, the storm has dropped 35 inches of rain in parts of southern Guatemala, Chiapas, Mexico and El Salvador. Portions of Mexico and Central America might see an additional one to 12 inches of rain Friday and Saturday, with isolated areas possibly seeing up to 25 inches.

Mexico has issued a Tropical Storm Watch for the eastern Yucatan Peninsula from Punta Herrero to Rio Lagartos for the possibility of tropical storm force winds later Friday. Cristobal is expected to strengthen into a tropical storm once it returns into the Gulf of Mexico’s waters and begins moving toward the U.S. Gulf Coast.