Cherishing 100 years of a World War II veteran with Purple Stars, patience and a love of peace

A photograph of Daniel Galuppo, around age 21, sits next to a case of medals on display at his 100th birthday party Friday, June 19, 2020, in his DeWitt backyard. The World War II veteran was wounded in two major battles, including the Battle of the Bulge in Belgium, and was awarded two purple hearts. (Lauren Long | [email protected]/TNS)
June 29, 2020 Chris Carlson - Syracuse Media Group
Share
Tweet
Flip

Over the course of 100 years, Daniel Galuppo has been a World War II survivor, an Italian cook, a patient swim coach and a kitchen remodeler.

His family celebrated it all on Friday in a backyard on DeWitt’s Briarcliff Road.

There was a birthday cake decorated with the American flag and a military medal display that included a pair of Purple Hearts and one of his two Bronze Stars. There was a ceremony with 14 friends and family members, a beeping car and a neighbor who paused work to shout over the fence.

Family and friends raise their glasses for Daniel Galuppo, who celebrated his 100th birthday Friday, June 19, 2020, in his DeWitt backyard. The World War II Veteran was wounded in two major battles, including the Battle of the Bulge in Belgium, and was awarded two purple hearts.
(Lauren Long | [email protected]/TNS)

His family described him as a “gold-medal” survivor whose 100 years included being wounded twice during World War II and then navigating the emotional challenges soldiers faced as they settled into a more traditional life in Syracuse.

“He’s been through so much and has still made a life that was quite good,” said Patrick McCooey, a close family friend. “He was dealt a pretty bad hand and was able to pull a good life out of it. There have been a lot of place in his life where he’s been able to find joy.”

The guests wore facemasks and sat in chairs that were spaced apart. The coronavirus pandemic made it a smaller gathering than they’d hoped and a more distant one than a member of The Greatest Generation might have liked.

With his memory starting to fade, Galuppo struggled to identify the loved ones hidden behind the masks, but he beamed when they introduced themselves, reaching out lovingly to grab a brief hold of their hands or forearms in recognition.

Daniel Galuppo talks with his niece, Mary Montanaro, during his 100th birthday celebration Friday, June 19, 2020, in his DeWitt backyard. The World War II veteran was wounded in two major battles, including the Battle of the Bulge in Belgium, and was awarded two purple hearts. He’s also fondly remembered – especially by his nieces and nephews – for his homemade pasta which he made for years.
(Lauren Long | [email protected]/TNS)

“It was great to see everybody,” he said.

Like so many soldiers, Galuppo has talked reluctantly about his war-time experience during his life. Galuppo struggled with occasional nightmares until he was into his 80s, opening the door for his second wife, JoAnn Manuel Galuppo, to broach the subject and extract some of his history. She’s shared pieces with relatives (and now the rest of us) in an effort to preserve it.

He wrote his first wife a seven-page letter from across the ocean.

Galuppo is one of eight children born to Italian-American immigrants who settled in the Syracuse area. His father worked as a shoemaker. His mother herded eight children. When World War II arrived, the boys were quick to enlist. One of them, Liberty Americo Columbo Galuppo (who went by Libby), was honored for having a particularly patriotic name.

Dan Galuppo failed a physical on his first attempt to join the army but underwent hernia surgery so he could be allowed to join in early 1944 when he was 24 years old. 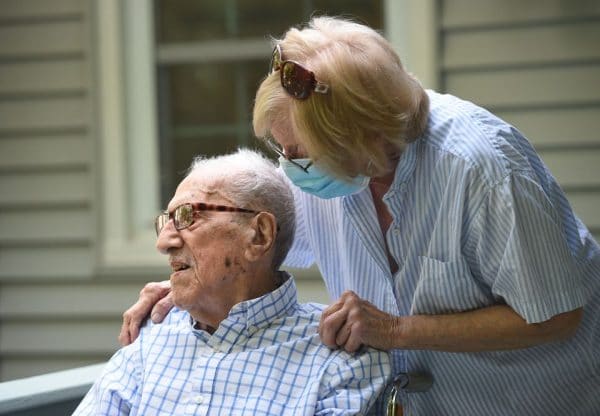 JoAnn Manuel Galuppo talks with her husband, Daniel Galuppo, during his 100th birthday celebration Friday, June 19, 2020, in their DeWitt backyard. The World War II veteran was wounded in two major battles, including the Battle of the Bulge in Belgium, and was awarded two purple hearts.
(Lauren Long | [email protected]/TNS)

In just over a year of service as a private first class in the U.S. Armed Service, he was wounded twice. The first time, his family says, he was the victim of shrapnel, the scars of which still mark the back of his legs and his body. He’s never revealed much about the circumstances.

A marksman, Galuppo was stationed on top of a tank with another soldier when they came under attack. The attack killed the other soldier and sent Galuppo to the ground with damage to his arms and legs. He doesn’t remember how he was wounded but, given the severe damage to his arm, he expects he was shot. He came to his senses while lying on the ground.

In a 2014 interview with CNY Central about World War II, he described the experience. 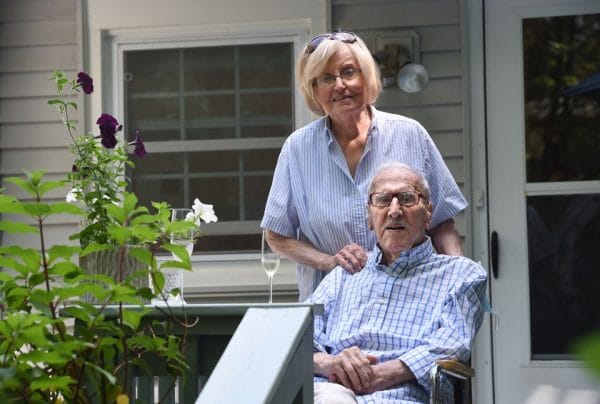 JoAnn Manuel Galuppo and Daniel Galuppo pictured during Daniel’s 100th birthday celebration Friday, June 19, 2020. A decorated Army veteran, Galuppo was severely wounded in two major battles, including the Battle of the Bulge in Belgium. Despite this, family and friends recall his ever upbeat and positive attitude for so many years after.
(Lauren Long | [email protected]/TNS)

“I don’t know what happened to me, but it blew me up pretty good,” Galuppo said. “(My arm) was just hanging. It was all broken. The elbow was gone. When I stood up to get out, I didn’t know my legs were broke too. Like standing on Jell-O.”

Galuppo was given sulfur for the wound and a promise the Americans would try to return for him.

During a break in the battle, he was found lying in the snow by a German officer, who ordered that Galuppo be helped to the basement of a nearby house where wounded German soldiers were being kept. JoAnn said they believe the officer was educated in the United States, allowing him to communicate. That moment likely saved Galuppo’s life.

“German officer, I think it was the captain, came up and said, ‘Tough war isn’t it,‘” Galuppo told CNY Central.

Galuppo was rescued days later when he heard the sounds of American tanks, then American voices, prompting him to shout from the basement.

“I actually find that story a bit uplifting,” JoAnn said. 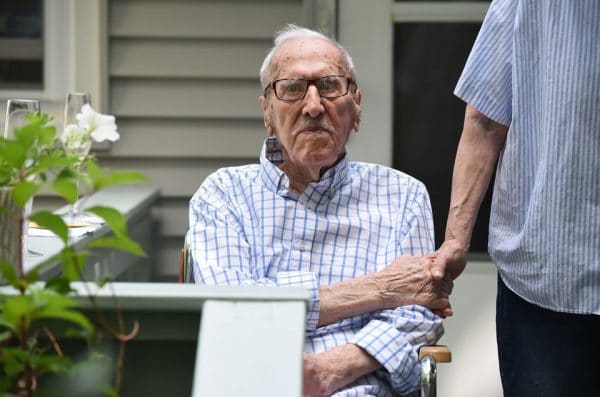 Daniel Galuppo holds his wife, JoAnn’s hand during his 100th birthday celebration Friday, June 19, 2020, in his DeWitt backyard. The World War II veteran was wounded in two major battles, including the Battle of the Bulge in Belgium, and was awarded two purple hearts.
(Lauren Long | [email protected]/TNS)

Galuppo never regained full strength in his arm and was sent back to the United States, where family and friends say an equally remarkable chapter of his life would unfold.

Galuppo was changed by his war experience. He suffered significant bouts of depression. These days, his family thinks, he would have been diagnosed with PTSD.

Despite all of that, he carved out a life full of love.

Whenever the television shows United States politicians becoming belligerent with leaders of other countries, he shouts warnings against going to war, hoping that others won’t endure a similar experience.

He served as the centerpiece of a big Italian family, where he was the host of weekly dinners. He made homemade wine and was particularly skilled at making fresh pasta. He taught relatives how to roll their thumb in order to create a perfectly-shaped cavatelli. 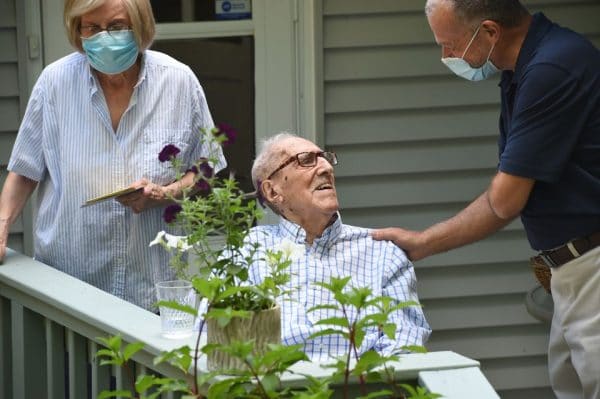 David Montanaro wishes his uncle, Daniel Galuppo, a happy 100th birthday Friday, June 19, 2020, during a small celebration in Galuppo’s DeWitt backyard. The World War II veteran was wounded in two major battles, including the Battle of the Bulge in Belgium, and was awarded two purple hearts. At left is Galuppo’s wife, JoAnn.
(Lauren Long | [email protected]/TNS)

His nieces and nephews describe him as being their most good-natured uncle as an adult, known for his generosity and patience. The family tree is sprawling that it would take a genealogist to keep track of all the relatives, but Galuppo devoted himself to family and attended as many of their major life events as possible

He volunteered to renovate kitchens, a personal specialty. He spent 20 years working for Carrier before retiring with his first wife to Florida, where he taught Alesia and other family members to swim.

Dan was introduced to his current wife more than 20 years ago. His first wife had died a few years earlier. One of his nephews introduced them, asking Jo if she wanted to date his “favorite uncle.”

They had dinner. Then coffee. Then Dan suggested JoAnn’s kitchen could use a little makeover.

He neglected to mention he was approaching 80 years old. It didn’t matter. She was impressed by his kindness and generosity. He went from summering in Syracuse to moving into her home, where they still reside today thanks to the help of loved ones.

The Syracuse VA Medical Center has taken good care of Dan’s health, which has been a bigger issue as he approached 100. He uses a wheelchair now, the result of age and arthritis and those old injuries. His neighbors have been willing responders when they’ve needed emergency help, allowing them to remain in the home.

So they all stood together in the backyard on Friday, with Daniel looking our over his back porch and waving his arm in greeting.

A neighbor interrupted her workday to shout “Happy Birthday” from the next yard over. A car beeped in celebration in a physically-distanced greeting. They read a poem about Dan and raised a glass of champagne. His nephew David Montanaro bought him the last four jelly doughnuts from Wegmans and then got teary-eyed as he expressed his admiration.

“We cherish everything you’ve done,” Montanaro said. “You experienced so much and you came back home and were the most out-going, supportive and friendly of all the uncles. I had all great uncles but you stood out. … I’m just so proud.”