The former Atlanta police officer who shot Rayshard Brooks in the back after he resisted arrest and ran off outside a Wendy’s fast-food restaurant will be charged with felony murder and aggravated assault with a deadly weapon, according to a Georgia district attorney.

Garrett Rolfe, 27, a white officer, was fired within 24 hours of firing his handgun at Brooks, a 27-year-old black man. 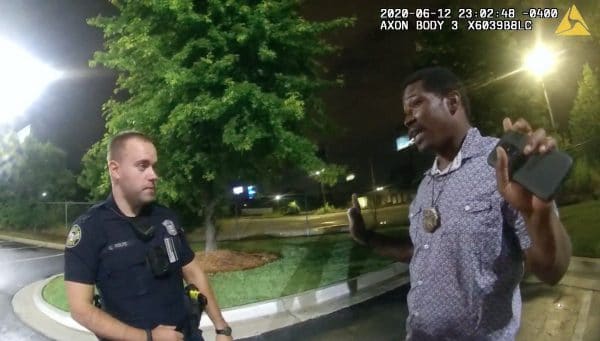 Not only was Brooks calm and cordial before Rolfe sought to arrest him, Howard said, but he was also not informed that he was under arrest for driving under the influence.

Rolfe and the other officer on the scene, Devin Brosnan, did not provide Brooks with timely medical attention after the shooting. And Rolfe actually kicked Brooks while he lay on the ground fighting for his life, Howard said, while Brosnan stood on Brooks’ shoulder.

The minimum sentence for murder in Georgia is life in prison without parole or the death penalty.

The shooting, which was captured on video by an eyewitness as well as surveillance and police body cameras, sparked protests across Atlanta last weekend after weeks of nationwide anger over the death of George Floyd in Minneapolis and the nation’s long history of police brutality against blacks.

Within hours of Brooks’ death, Mayor Keisha Lance Bottoms announced the resignation of the city’s police chief, Erika Shields. Protesters shut down lanes of a major interstate in downtown Atlanta, faced off with police in riot gear and set fire to the Wendy’s.

The attorneys that represent Rolfe released a statement shortly before the news conference, saying that Brooks’ death was tragic, but that Rolfe’s actions were justified because he feared for his safety and the safety of civilians.

“Mr. Brooks violently attacked two officers and disarmed one of them,” the LoRusso firm said in a statement. “When Mr. Brooks turned and pointed an object at Officer Rolfe, any officer would have reasonably believed that he intended to disarm, disable, or seriously injure him.”

According to a disciplinary history report released by the Atlanta Police Department, Rolfe was reprimanded in 2017 for use of force involving a firearm. It was his only previous use-of-force complaint in his 6 1/2 years with the department, although he had faced multiple complaints of vehicle accidents, citizen complaints and a firearm discharge.

The incident began just after 10:30 p.m. Friday, when Rolfe and Brosnan were dispatched to the Wendy’s a few miles south of downtown to investigate a complaint that a man had fallen asleep in the Wendy’s drive-thru line.

The encounter was initially peaceful. Police bodycam footage showed Brooks complied with Brosnan’s request to move his car from the drive-thru line to a parking spot and agreed when Rolfe asked him to take a sobriety test. But after he failed the test, he resisted when Rolfe tried to handcuff him.

The witness video shows Brooks wrestling with the officers on the ground. During the struggle, he appears to grab Brosnan’s Taser and punch Rolfe. Rolfe fires his Taser at Brooks, who then breaks free and runs away across the parking lot.

Rolfe gives chase and Brosnan follows. Surveillance camera footage from Wendy’s shows Rolfe pass his Taser from his right to left hand as he runs and reach for his handgun. Brooks keeps running, glancing behind him and firing the Taser in Rolfe’s direction. Rolfe fires his handgun three times at Brooks as he runs away.

On Sunday, the Fulton County medical examiner’s office declared Brooks’ death a homicide, saying he had two gunshot wounds in the back that created organ injuries and blood loss.

Howard, who is African American and running for reelection this year, told CNN on Sunday that he was considering three charges against Rolfe: murder, felony murder and voluntary manslaughter. Of those two options, he said, murder and felony murder were the most likely.

“He did not seem to present any kind of threat to anyone,” Howard said of Brooks. “And so the fact that it would escalate to his death just seems unreasonable.”

On Monday, Bottoms described the killing as a “murder” and announced a series of immediate reforms in police use-of-force policies that would require officers to use de-escalation techniques and use only “the amount of objectively reasonable force necessary to successfully protect themselves or others to effect an arrest or to bring an incident under control when dealing with members of the community, suspects, detainees.”

Officers, she said, will also be “duty-bound to intercede” when they see fellow officers apply unreasonable force.

“It is clear that we do not have another day, another minute, another hour to waste,” she said.

Some in law enforcement have argued that the officers’ conduct in the case is more ambiguous than in the Floyd case because Brooks resisted arrest, grabbed an officer’s Taser and then fled, turning around at one point to deploy the Taser.

In Minneapolis, Officer Derek Chauvin pressed his knee into Floyd’s neck for more than eight minutes when he was handcuffed and already restrained by multiple officers.

According to Georgia law, a person is justified in using deadly force “only if he or she reasonably believes that such force is necessary to prevent death or great bodily injury to himself or herself or a third person.”

Vincent Champion, Southeast regional director for the International Brotherhood of Police Officers, which represents more than 1,100 Atlanta officers, said police officers in Atlanta agreed that the killing of Floyd was a crime.

“The police departments and officers that I represent, not one has said what happened to Mr. Floyd was just. It was a crime. And that officer deserves any and everything that he gets. We don’t train that way.”

Champion said he worried the Atlanta officers were not getting due process and that the charges in the Brooks case seemed politically motivated. He noted that Howard recently charged four officers with aggravated assault after a viral video showed a group of officers shattering the windows of a sedan and Tasing two black college students inside.

Over the last few days, Brooks’ family and protesters have demanded that Rolfe be charged and convicted.

“We must all agree to one fact: He was killed by the Atlanta Police Department,” Brooks’ cousin, Tiara Brooks, said Monday at an emotionally charged news conference.

“The trust that we have with the police force is broken. The only way to heal some of these wounds is through a conviction and a drastic change with the Police Department.”

“There’s no justice that can ever make me feel happy about what’s been done,” Brooks’ widow, Tomika Miller, said. “I can never get my husband and best friend back.”