At age 100, this retired WWII vet lives alone, walks the stairs, and shops for his disabled neighbor

John Edward James Jr. doesn’t have any special advice for living to 100.

He does believe in getting his rest.

“He’s been going to bed at 8 o’clock every night since I was a baby,” said daughter Marion Lane, 71.

He also never smoked or drank alcohol, she said.

About 15 relatives — his two surviving daughters, four grandchildren, five great-grandchildren, and a few other close kin celebrated with a small party Sunday at James’ home in the Elmwood section of Philadelphia. 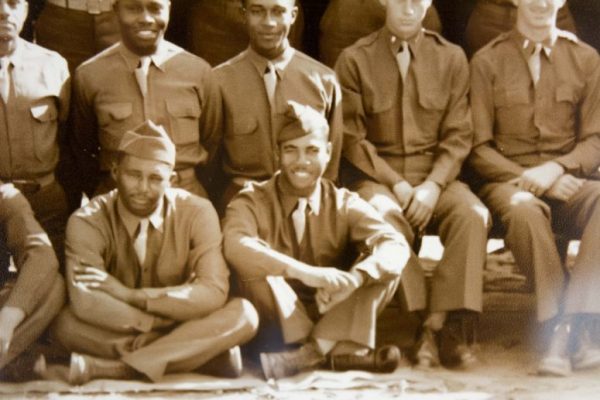 “We had food and a birthday cake,” Lane said. “But we tried to be safe, and we all wore masks,” due to the COVID-19 pandemic.

James has outlived two wives, and he often jokes that he’s “looking for his third wife.”

He appears in remarkable condition at 100.

He lives on his own. He cuts his own grass, and he drives a mile and a half to the grocery store. In addition to his own shopping, he also shops for a disabled neighbor.

“There are 30 stairs in this three-story townhouse, and he goes up and down them all the time,” Lane said. “And he’s not limping. But both his daughters — my sister and I — are limping.”

James was born June 15, 1920, in Johnstown, Pa., but grew up in Charles City County, Va., across the river from Jamestown.

After graduating from high school, James moved to Philadelphia because there weren’t many jobs in his rural hometown.

He was one of 21 men of color who graduated, most of whom were assigned to be in charge of all-black troops.

However, because James was assigned to the 242nd Quartermaster Battalion, he would have been placed in charge of white officers if the Army gave him his commission as second lieutenant.

James and his family believe he was denied the commission because of his skin color. He identifies as multi-racial, with African, Native American, and European ancestry.

During World War II, he worked in five campaigns, in North Africa and in Italy, from the toe of the boot up to the Apennines in the north. He wasn’t in combat, but served on the front lines as a clerk-typist.

After Lane waged a three-year campaign, the Army finally issued his commission in 2018.

The Museum of the American Revolution hosted the June 2018 ceremony, shortly after his 98th birthday and about 75 years late.

The museum featured James in a profile that said:

“James descends from a long line of men who served in the military, dating back to the American Revolution during which his great-great-great-grandfather served as a sergeant and was at the Valley Forge encampment in 1777-78. In addition to the Sons of the American Revolution and the Sons of the Revolution, James is a member of the Society of Descendants of Washington’s Army at Valley Forge.”

After the Army, James returned to Philadelphia and met and married Mary Elizabeth Ficklin, daughter of a prominent Baptist minister.

(The Ficklin family has its own long history of working in the White House, from 1939 to 2016, serving as butlers or as maitres d’. The last one, John Wrory Ficklin, retired in 2016 as a special assistant to the president and senior director for records and access management at the National Security Council.)

James attended mortuary college after his Army service, but was put on a waiting list to become an apprentice with a funeral director.

Because his wife was expecting their first child, he couldn’t wait to become an apprentice. He went to work for what is now the U.S. Postal Service and stayed for 30 years. For the first 15 years, he was a letter carrier, and later was a manager until he retired in 1976.

His first wife died in 1969. Then, in 1971, James married Doris Reavis, who was his first girlfriend in high school in Virginia. They were married until her death in 2001.

James doesn’t believe in talking much.

“He used to tell us, ‘The only fish that doesn’t get caught is the one that kept his mouth closed,’” Lane said.

On Monday, James said he was excited to have his family celebrate with him. He said it felt “fantastic” to be 100.

His other popular advice to his children:

“’Don’t let a ‘no’ stop you. If you go down this road and run into a ‘no,’ don’t give up your hopes. Take another road, and you can achieve your goals.’”