2 dead, 7 injured from gunfire, 5 injured after hit by cars at block party in North Carolina

Police say an impromptu block party in north Charlotte left two people shot and killed and another seven being treated for gunshot wounds at local hospitals.

In addition, five others were hurt when cars hit them as they tried to run from the bullets.

CMPD said this all started around 12:30 a.m. when MEDIC responded to reports of a person hit by a car on Beatties Ford Road and Lasalle Street, near Catherine Simmons Avenue.

As soon as they arrived, shots were fired. Shortly after, officers found a woman with a gunshot wound lying in the roadway. She was pronounced dead at the scene, but police have not identified her. 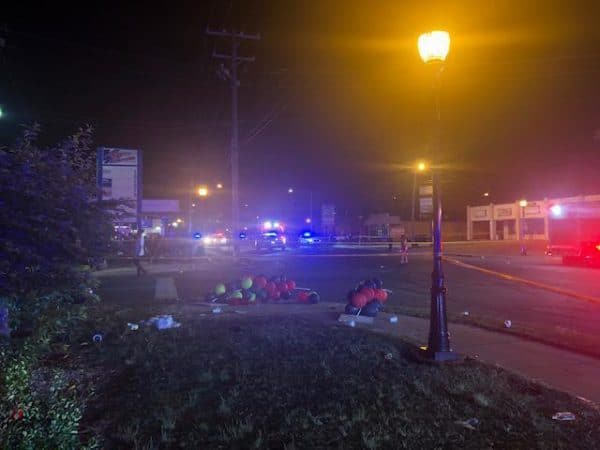 Another gunshot victim was taken to the hospital, but later died from their injuries.

Officials said eight other people were shot. Five people were also hit by cars — according to police, one person was the original victim officers were responding to while the other four were hit running for safety.

Charlotte-Mecklenburg police officers believe this started as an impromptu block party. Officials said hundreds of people and cars were in the street.

In a cellphone video sent to WSOC, cars could be seen doing doughnuts and fireworks were being shot off.

At one point, someone was hit by a car and the video shows an ambulance arriving. Soon after, you can hear several gunshots, people running away chaotically and hiding in their cars.

Authorities say several shooters were involved and fired dozens of shots into the crowd, but at this point they do not have any leads on suspects.

Incoming CMPD police chief, Chief Deputy Johnny Jennings, spoke early Monday morning after the shooting. He said he was emotionally impacted by what had happened.

“Several people got into the streets. It was a continuation,” Jennings said. “They had a celebration here that was planned and organized earlier this week on Friday that just continued on into tonight. The results of it got out of hand. It was something that we never want to see as a community or a police department. It is very unfortunate.”

Charlotte City Councilman Malcolm Graham, who serves the second district where the shooting happened, said Monday morning the area has made so much progress and this entire incident really saddens him.

“This does not define us, but is certainly something very tragic,” Graham said. “What happened last night in the city and on that corner, which has a history of being self-sufficient, a lot of good work going on by neighborhood leaders and organizations. Last night certainly won’t define who we are, but certainly it is giving cause for concern about how we conduct ourselves.”