Following Twitter’s fact-checking and censorship of President Donald Trump’s recent tweets, the White House released its own tweet questioning why Twitter has not censored or fact-checked tweets by dictators advocating terrorism.

The White House included a screenshot of a tweet by Iran’s Ayatollah Ali Khamenei – the highest authority in Iran – who tweeted, “The struggle to free Palestine is Jihad in the way of God. Victory in such a struggle has been guaranteed, because the person, even if killed, will receive ‘one of the two excellent things.’ Also, crimes against Palestine trouble any human’s conscience & inspire opposition.”

This Tweet violated the Twitter Rules about glorifying violence. However, @Twitter has determined that it will allow terrorists, dictators, and foreign propagandists to abuse its platform. pic.twitter.com/5Qi0m66Vnh

Khamenei’s tweet was part of an extensive 25-part series of tweets he made on May 22, including one that called Israel “a deadly, cancerous growth and a detriment to this region. It will undoubtedly be uprooted and destroyed.”

Serious question for @Twitter: Do these tweets from Supreme Leader of Iran @khamenei_ir violate “Twitter Rules about glorifying violence”? pic.twitter.com/oEkCC8UzFV

Early Friday morning, Twitter censored another of Trump’s tweets – this time one vowing to send in the military to support Minneapolis, Minn. as protesters continue violence and destruction in reaction to the death of George Floyd.

“I can’t stand back & watch this happen to a great American City, Minneapolis. A total lack of leadership. Either the very weak Radical Left Mayor, Jacob Frey, get his act together and bring the City under control, or I will send in the National Guard & get the job done right,” Trump tweeted early Friday morning.

“These THUGS are dishonoring the memory of George Floyd, and I won’t let that happen. Just spoke to Governor Tim Walz and told him that the Military is with him all the way. Any difficulty and we will assume control but, when the looting starts, the shooting starts. Thank you!” Trump added. 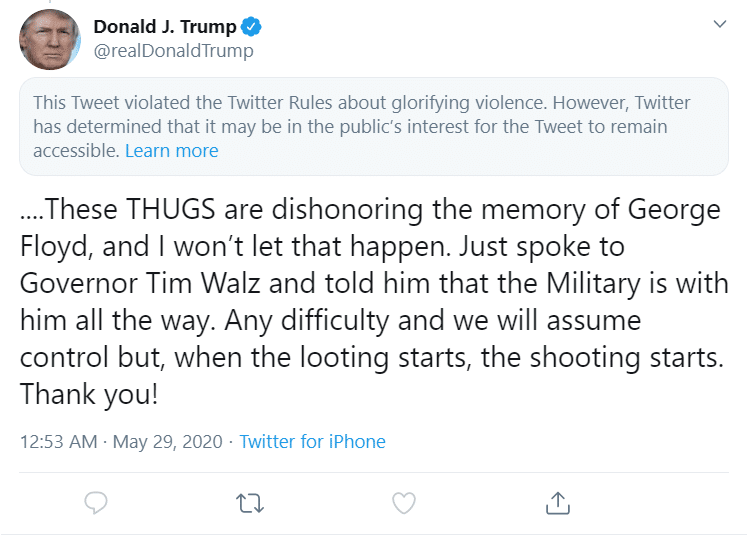 Trump’s tweets vowing to send in the military to Minneapolis on May 29, 2020 were censored by Twitter as “glorifying violence.” (Donald J. Trump/Twitter)

The White House also responded to Twitter’s censorship of the tweet, saying, “The President did not glorify violence. He clearly condemned it. Jack [Dorsey, Twitter’s CEO] and Twitter’s biased, bad-faith “fact-checkers” have made it clear: Twitter is a publisher, not a platform.

The President did not glorify violence. He clearly condemned it.@Jack and Twitter’s biased, bad-faith “fact-checkers” have made it clear: Twitter is a publisher, not a platform. https://t.co/lTm3Pxxaqg

Trump said that Twitter had acted as “an editor with a viewpoint” and engaged in “political activism” by editing user tweets with fact check labels, in what he described as censorship.

The action came just two days after Twitter, for the first time, labeled two of Trump’s tweets as “potentially misleading” and included a fact-checking disclaimer. Trump’s tweets had insisted that mail-in ballots could lead to fraud and election rigging, a claim Twitter labeled “unsubstantiated” and rebutted with tweets from verified users claiming the merits of mail-in voting.