Vietnam War Army veterans Michael Jacobson (left) and Patrick Clark become emotional as they embrace while being reunited after not having seen each other since 1980 on Tuesday, May 5, 2020. Jacobson traveled from Idaho to Springfield to spend the week with his friend at Clark's home in Dunnegan. [Nathan Papes/Springfield News-Leader/TNS]
May 13, 2020 Jackie Rehwald - Columbia Daily Tribune
Share
Tweet
Flip

Vietnam War veterans Michael Jacobson and Patrick Clark first met while on a special operations mission in Cambodia in 1976.

When the mission had to be suddenly abandoned, the Army split them up so no one involved could communicate about what happened.

Jacobson was sent to Germany, Clark to Kentucky.

The young Army soldiers, reeling with post-traumatic stress disorder, were reunited in 1980 when they both happened to be stationed at Fort Polk in Louisiana. 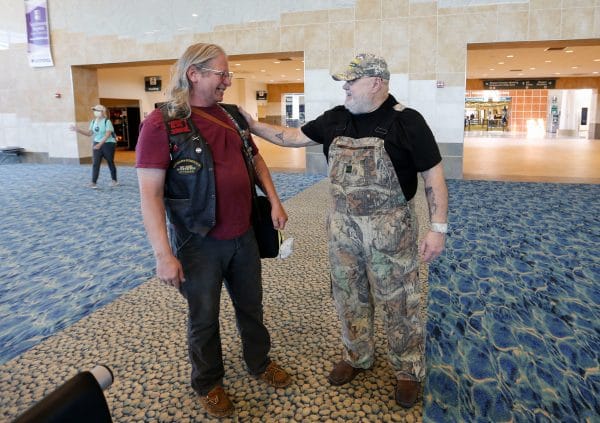 Vietnam War Army veterans Michael Jacobson (left) and Patrick Clark catch up after being reunited after not having seen each other since 1980 on Tuesday, May 5, 2020. Jacobson traveled from Idaho to Springfield to spend the week with his friend at Clark’s home in Dunnegan. [Nathan Papes/Springfield News-Leader/TNS]

They had about a year together in Louisiana. They drank and got into bar fights from time to time, and tried to piece together what happened in Cambodia. The pair were never really able to make sense of the mission, but they at least had each other to talk to about it.

In 1981, Jacobson was sent to Korea. Clark got married and settled down. The two, again, lost track of each other.

Jacobson and Clark found each other — thanks to the internet — last year. And this week, Jacobson flew from his home in Idaho to the Springfield airport where he was reunited with Clark.

The News-Leader gave the men a couple of days to catch up at Clark’s home in Dunnegan and then spoke with them by phone about their time in Cambodia, their struggles with PTSD and the special bond they share.

“We are brothers,” Clark said.

And while they are not related by blood, the two men have a lot in common.

Both of their fathers served in the military and fought in Korea. Both men voluntarily joined the Army and both served 17 years.

Clark, 67, is from Modesto, California. Jacobson, 62, is from Seattle.

There were six Army soldiers chosen to complete a special operations mission in April of 1976, Jacobson said.

They carried no military identification and dressed as though they were locals. They camped off by themselves and were instructed to take soil and vegetation samples.

“Michael was the one that was collecting samples and I was there to guard him,” Clark said.

Asked about the significance of the soil and vegetation collection, the men said they were never told.

“We were just going in to do our mission,” Jacobson said, “and then get the hell out of there.”

But a few weeks into the mission, three Cambodian men stumbled upon their camp. The U.S. soldier with a radio had to “call it in.”

“We were instructed to take them into our custody and blindfold them,” Jacobson said. “Then a helicopter was sent in to pick us up. Of course, at that time we thought, ‘Oh s**t.’ The stress levels were like thick maple syrup.”

Jacobson said when the helicopter arrived, two men were on board. The soldiers believed the men were interrogators with the CIA but were never formally introduced.

“The stress level went up even higher,” Jacobson said. “They were very nasty people. They scared the hell out of me.”

Jacobson said the Cambodian man reached for something in a way that frightened Jacobson.

“I just reacted because I was protecting what was essentially my family,” Jacobson said. “I took his life.”

Clark grabbed Jacobson and threw him down.

“He felt my life was in danger,” Jacobson said of Clark.

Clark agreed with Jacobson’s recollection of the traumatizing events.

“That is something we’d never forget,” Clark said.

The soldiers were flown to a small base in Thailand and immediately separated.

“We were taken to psych units to be debriefed,” Clark said.

“I was flown back to Germany,” Jacobson said. “I was, of course, still in shock. They put me in a psych ward for a couple of days and I was told not to reveal about it, never talk about it.”

Over the years, the PTSD took a toll, Jacobson said. Both men have sought counseling.

They’ve both been married a few times. They credit their current wives with helping them cope.

Clark and his wife will soon celebrate their 40th anniversary.

“I was in pretty rough shape till I met her,” Clark said. “She got me through it.”

“I’m on my third marriage,” Jacobson said. “My wife now has really helped me.”

Jacobson said he never talked to his first two wives about what happened in Cambodia.

“I never brought it up to any people I knew because I didn’t trust anybody,” Jacobson said. “The only one I trusted was Patrick and I didn’t know where he was.”

Asked how it felt to see each other at the airport, both men laughed.

“Oh man, I don’t even know how to explain it,” Clark said. “It’s wonderful. I recognized Jake (short for Jacobson) right off. He hasn’t changed much other than a little older.”

Jacobson will stay with Clark till the 11th. Now that they’ve reconnected, their wives want to meet.

Looking back on their time in the military, both men said they’d absolutely serve their country if asked.

“If I was asked by my country to support my family, my friends, my brothers in arms,” Jacobson added, “I would gladly suit up and do it all over again.”

‘Everyone was struggling to breathe’: Coronavirus hits veterans home in Alabama