Vids/Pics: Here is the first Space Force flag in the Oval Office

President Donald Trump discussed the effort to stand up the newest branch of the U.S. military during Friday remarks as he signed a Presidential proclamation honoring Armed Forces Day 2020.

“16,000 space professionals assigned to the Space Force, we’re proud of this flag,” U.S. Space Command Commander Gen. John Raymond said. “They come to work every day focusing on providing space capabilities for our nation, for our joint coalition forces and for the world. We’re proud of this flag. We’re proud to have an opportunity to present it to you here for display in the White House.”

“I’d like you to say exactly, because his rank is a very special rank,” Trump said.

Towberman acknowledged Trump’s comment that his rank makes him “the highest sergeant by far.” He is the only airman to wear the rank.

Towberman and Raymond then proceeded to unfurl the flag.

“And with that, the Space Force flag is unfurled,” Politico Defense editor Dave Brown tweeted, along with video of the unfurling.

And with that, the Space Force flag is unfurled pic.twitter.com/PIrTMqsBb8

“The delta in the middle, that’s the symbol that space communities use for years and years and years. The North Star signifies our core value, our guiding light, if you will,” Raymond said. “And the orbit around the globe signifies the space capabilities that fuel our American way of life.” 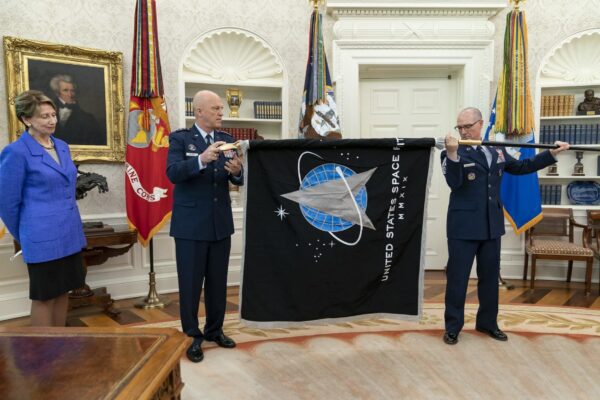 The flag also includes the Roman numerals MMXIX, marking the year 2019 when the Space Force was initially funded and brought into official formation.

Unfurling the new Space Force flag in the Oval pic.twitter.com/PXVOmVQmcy