“We now have developed debit cards. In an effort to expedite money to people even quicker in a very safe way, I’m pleased to show you what a debit card looks like with your name on it, Mr. President,” Mnuchin told Trump at a cabinet meeting on Tuesday. 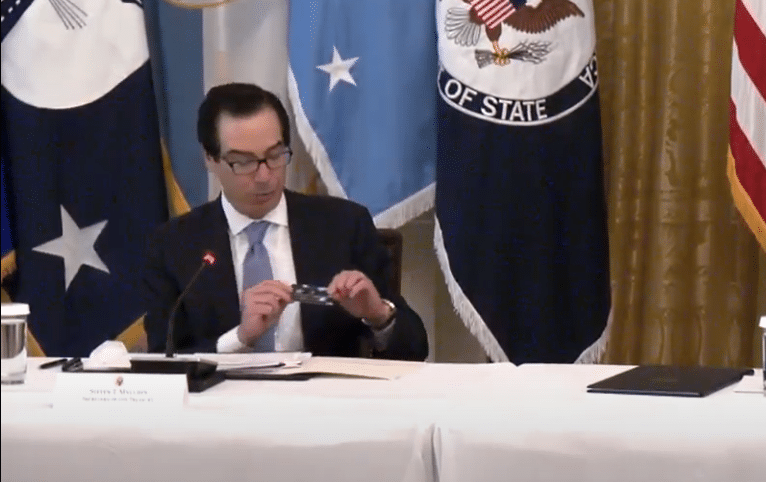 “We think debit cards are a safe and secure way of delivering refunds,” Mnuchin added.

The debit card appears to have an American flag image showing a blue background with white stars. It’s not yet clear how Trump’s name appears on the card.

“Here’s a card w/ your name on it Mister President. Now there’s no money for you on it, this is a blank debit card” @stevenmnuchin1 during cabinet meeting unveiling a new debit card to “expedite” process of getting stimulus money to Americans. pic.twitter.com/gNZvkQV2Gk

Over the past five weeks, the Treasury has sent $239 billion to 141 million Americans – 114 million of which received their funds via direct deposit, and another 27 million via mailed checks.

“Do I sign the letter again or not?” Trump jokingly asked about the letter accompanying the debit cards.

“The next time we send money, you’ll get to send another letter,” Mnuchin replied.

The Treasury will begin mailing the debit cards this week through its financial agent, MetaBank. The cards are free, prepaid cards that can be used to make purchases, withdrawing funds from ATMs, and transferring funds to a bank account, the Treasury said.

The Treasury first sent direct deposit payments to Americans who had a bank account on file with the IRS, which was the fastest method of delivering the funds. Those who did not have a bank account information on file were receiving checks, but the debit card is expected to be sent instead of checks to Americans still waiting on their funds.

Americans who had not earned enough income to file tax returns are among those who have not yet received stimulus funds, and must submit information to the IRS before they will receive funds.