Trump signed the order in the Oval Office, telling reporters that Twitter had acted as “an editor with a viewpoint” and engaged in “political activism” by editing user tweets with fact check labels, in what he described as censorship.

“We’re here today to defend free speech from one of the greatest dangers,” Trump said before signing the order.

“Today, I am signing an Executive Order to protect and uphold the free speech and rights of the American people.” pic.twitter.com/agTIJ2KR6C

The order seeks to redefine policy in order to recognize social media platforms as public forums that are not authorized to infringe on users’ free speech.

Attorney General William Barr said the Justice Department would be drafting legislation to limit social media companies’ legal protections afforded by Section 230 of the Communications Decency Act. The law protects content publishers from legal action that may stem from defamation or similar charges.

“Section 230 was not intended to allow a handful of companies to grow into titans controlling vital avenues for our national discourse under the guise of promoting open forums for debate, and then to provide those behemoths blanket immunity when they use their power to censor content and silence viewpoints that they dislike,” the executive order states.

“Twitter, Facebook, Instagram, and YouTube wield immense, if not unprecedented, power to shape the interpretation of public events; to censor, delete, or disappear information; and to control what people see or do not see,” the executive order states.

Trump said he expected the order to be challenged in court. The federal government could be accused of violating companies’ First Amendment protections, or overstepping its authority in curbing the companies’ legal protections, which were laid out by federal court precedent.

Trump said in a tweet Thursday morning, “This will be a Big Day for Social Media and FAIRNESS!”

This will be a Big Day for Social Media and FAIRNESS!

The action comes just two days after Twitter, for the first time, labeled two of Trump’s tweets as “potentially misleading” and included a fact-checking disclaimer. 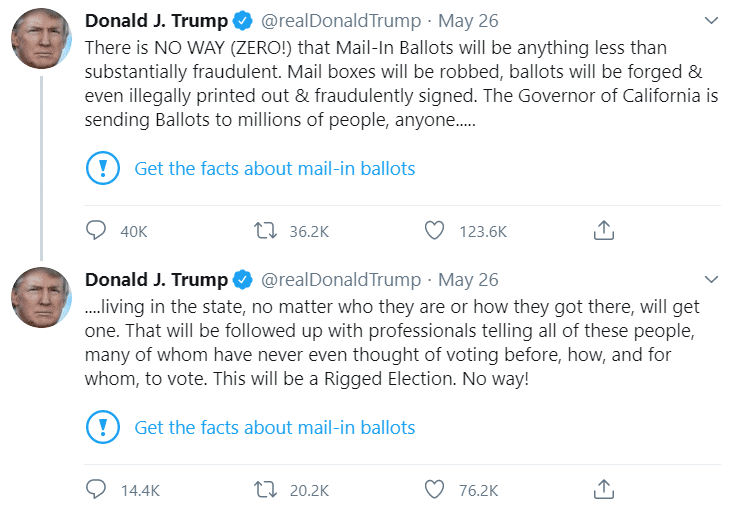 Trump’s tweets about voter fraud on May 26, 2020 were flagged by Twitter as “potentially misleading” for the first time. (Donald J. Trump/Twitter)

White House Press Secretary Kayleigh McEnany said during a Thursday press conference, “There are various shields in place that essentially shield some of these social media companies and allow them to censor conservative users.  And we’re not able to see what happens behind those shields. …  So we’re looking at ways to remove those shields to shed some light on what is happening and some of the decision making behind the scenes.”