This Navy grad was a pilot. Now she’s a nurse on the front lines of coronavirus at Anne Arundel Medical Center.

Elizabeth Bailey is a Naval Academy grad and former Navy helicopter pilot who is now a registered nurse at Anne Arundel Medical Center. Bailey says her military training has helped her "to deal with the unknown, the uncharted territory which is this pandemic. And it's helped me lead people through this successfully." May 07, 2020. (Kim Hairston/Baltimore Sun/TNS)
May 18, 2020 Nathan Ruiz - The Baltimore Sun
Share
Tweet
Flip

Winds swirled and darkness reigned as Elizabeth Bailey tried to land an SH-60B Seahawk helicopter onto a Ticonderoga-class cruiser in the middle of the Arabian Gulf. She guided the helicopter toward the single landing space near the hangar doors, recognizing her life was on the line and in her hands.

Nearly 25 years later, the Naval Academy grad and former Navy pilot is responsible for the lives of others as a charge nurse at Anne Arundel Medical Center. Bailey, 51, supervises an observation unit that has been shifted into an intensive care group handling coronavirus cases.

“Everything I have done has led me up to this point,” Bailey said. “The Navy gave me the ability to be calm, think things through, deal with rapidly changing circumstances where we might not have all the information, deal with tremendous amounts of stress. 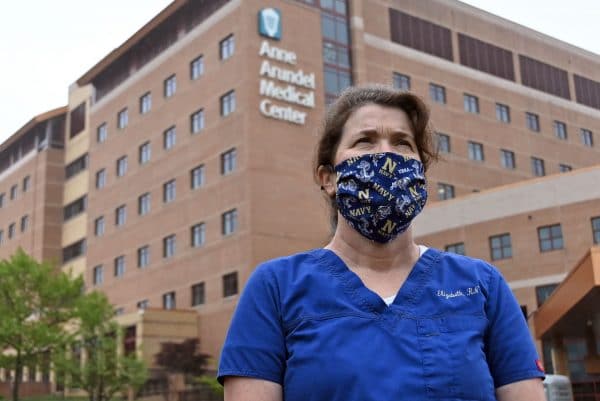 Elizabeth Bailey is a Naval Academy grad and former Navy helicopter pilot who is now a registered nurse at Anne Arundel Medical Center. Her colleagues say her military experience has added a strong, calming presence as they deal with the overwhelming challenges of the coronavirus.
(Kim Hairston/Baltimore Sun/TNS)

“I’ve been put in multiple situations as a pilot where my life was on the line, and you had this thought in the back of your head, ‘This could be it, and I’m OK with it.’ ”

Amid the pandemic, Bailey is leading a team of people putting their own health, safety and lives at risk to protect those facing COVID-19.

Laura DuFrane and Shelly Christenson, two floor nurses in Bailey’s unit, noted she’s a hands-on leader, able to provide help with patients and offer emotional support to fellow nurses when needed. That’s been the case often in the pandemic.

“We’re at battle against this invisible enemy, and having somebody with that military leadership experience who’s also a nurse brings this unique perspective to her ability to lead us in incredibly stressful and scary times,” DuFrane said. “This is not something that any of us civilian nurses signed up for.”

Both described Bailey as being “in the trenches” with them, the first to enter a room when help is needed.

“You always feel 100% supported when Elizabeth is your charge nurse,” Christenson said. “You know without question, no matter what the situation is, you are not alone.”

Bailey has been preparing for this role her whole life, her younger sister said.

“She has always been my protector,” said Catherine Franklin, four years Bailey’s junior. “And it wasn’t just with me. If somebody was being picked on or bullied at school, she would be the first one to step in and shut it down.”

Their mother, Betsy Franklin, worked as an emergency room nurse. Bailey intended to follow the same path until a teacher suggested engineering.

In truth, aerospace engineering excited her. Throughout her childhood in St. Mary’s County, her father, Samuel, took her to air shows at Naval Air Station Patuxent River.

After some research, she decided to attend the Naval Academy, about a decade after the school started accepting women.

“I went through the four years there, which is sort of a test of your will,” Bailey said. “Sometimes, you just try to survive day to day.”

She graduated in 1991 with an oceanography degree and headed to flight school in Pensacola, Florida, where she met her eventual husband, Mark, a Connecticut grad and fellow pilot aspirant.

“You know without question, no matter what the situation is, you are not alone.”

Bailey earned her wings in 1993, the year the female combat exclusion was lifted for aviation positions, allowing her to pilot the SH-60B Seahawk she and Mark were trained to fly. Both were eventually stationed in Mayport, Florida. In January, the residents of Owings in Calvert County will celebrate their 25th anniversary.

Bailey spent 14 years in the Navy before leaving as a lieutenant commander and spending a few years at home with their three daughters.

In 2010, her grandmother grew ill and was in and out of the hospital. The time around medical personnel brought back Bailey’s desire to be a nurse.

“It just hit me,” she said. “I was comfortable there.”

Bailey called Mark and asked whether he thought she would make a good nurse. He responded that she would be a great one.

“You bring a different mindset to the team when you’ve been in situations where your own life is at risk,” Mark said. “You find it easier to focus on what’s important.”

With Mark stationed in Fort Worth, Texas, Bailey worked toward a bachelor’s in nursing at the University of Texas at Arlington. It took her four years to get it, with naval coursework such as celestial navigation not providing credit for the needed anatomy and physiology courses.

In 2015, they moved back to Maryland, where Mark is director of inspections in the Office of the Naval Inspector General.

Bailey finished the final stages of that graduate degree while working shifts of up to 14 hours.

“I have people relying on me, and in the big picture, that matters more to me than anything,” she said. “I ask myself sometimes, ‘Why, with all this going on, do I look forward to going to work?’ … I feel like it’s even more so than it ever has been.”

That doesn’t surprise her sister at all.

“Elizabeth has been thriving in a way because she’s in her element.”

With Maryland’s nurses on the front lines fighting the coronavirus, The Baltimore Sun is sharing stories exploring nursing during National Nurses Week, May 6-12.