Sen. Ted Cruz got his first haircut in three months on Friday — at the Far North Dallas hair salon whose owner just spent two days in jail for defying emergency restrictions aimed at curbing the spread of COVID-19.

Salon a la Mode owner Shelley Luther became a cause celebre for Texas conservatives and others by reopening her business in violation of the governor’s orders, then refusing to back down when a local judge tried to enforce the ban. Cruz said that not only was she right, every Texas salon and restaurant should also have defied the governor’s ban despite the raging epidemic.

“Yes. Yes,” he said after his trim. “We need to take reasonable steps to flatten the curve, and stop the spread of this virus. We also need to let people provide for their families. We’ve got 34 million people who have lost their jobs the last two months. That’s 20% of the American workforce.” 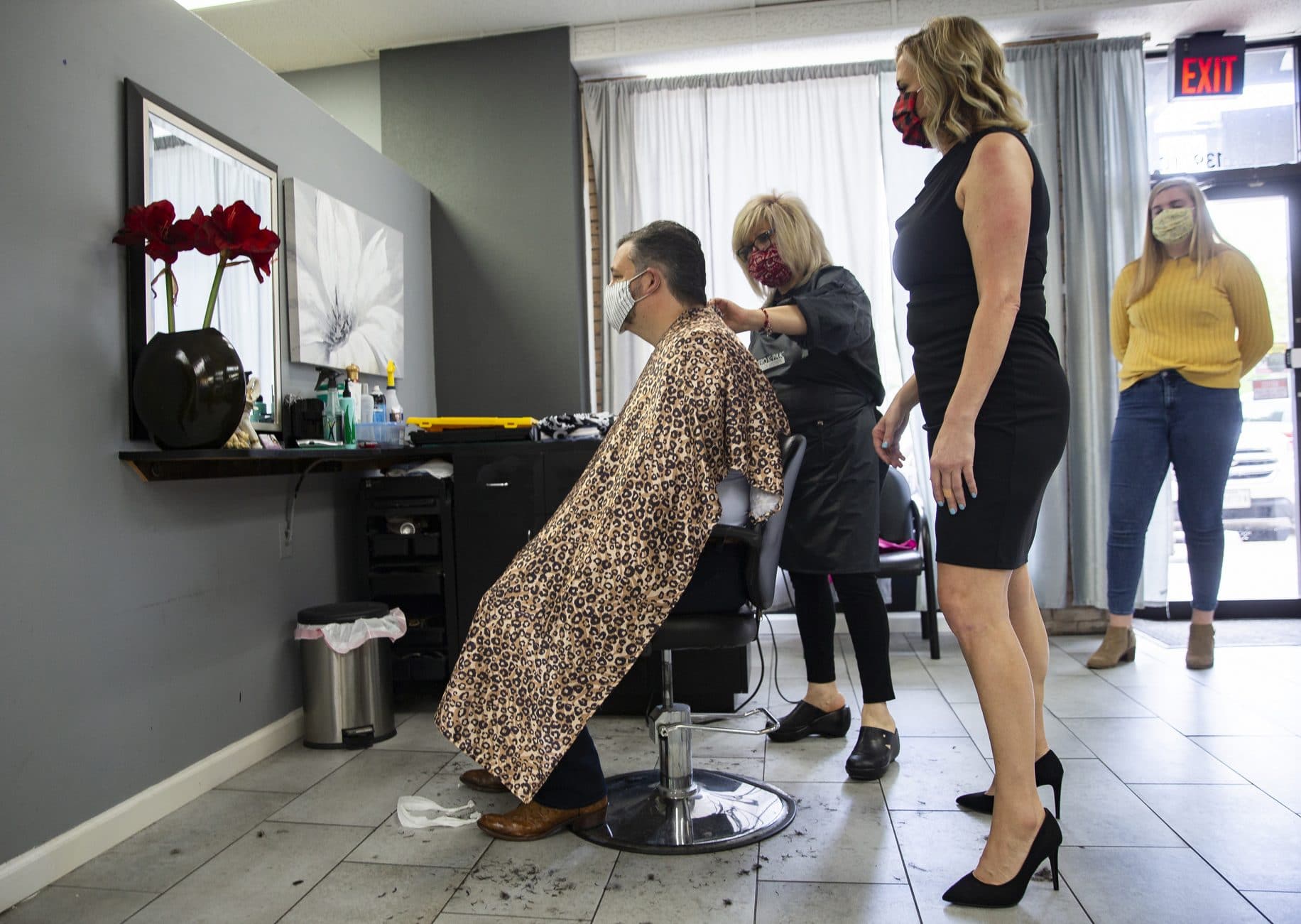 U.S. Sen. Ted Cruz, left, gets a haircut while owner Shelley Luther, second to right, watches at Salon a la Mode on May 8, 2020 in Dallas. (Juan Figueroa/ The Dallas Morning News/TNS)

“I got on a plane and I flew up from Houston. I needed a haircut anyway. And I figured that there wasn’t a better place I could pick on the face of the planet to get a haircut this morning than right here,” he told reporters afterward, standing outside with Luther nearby, still wearing their masks. 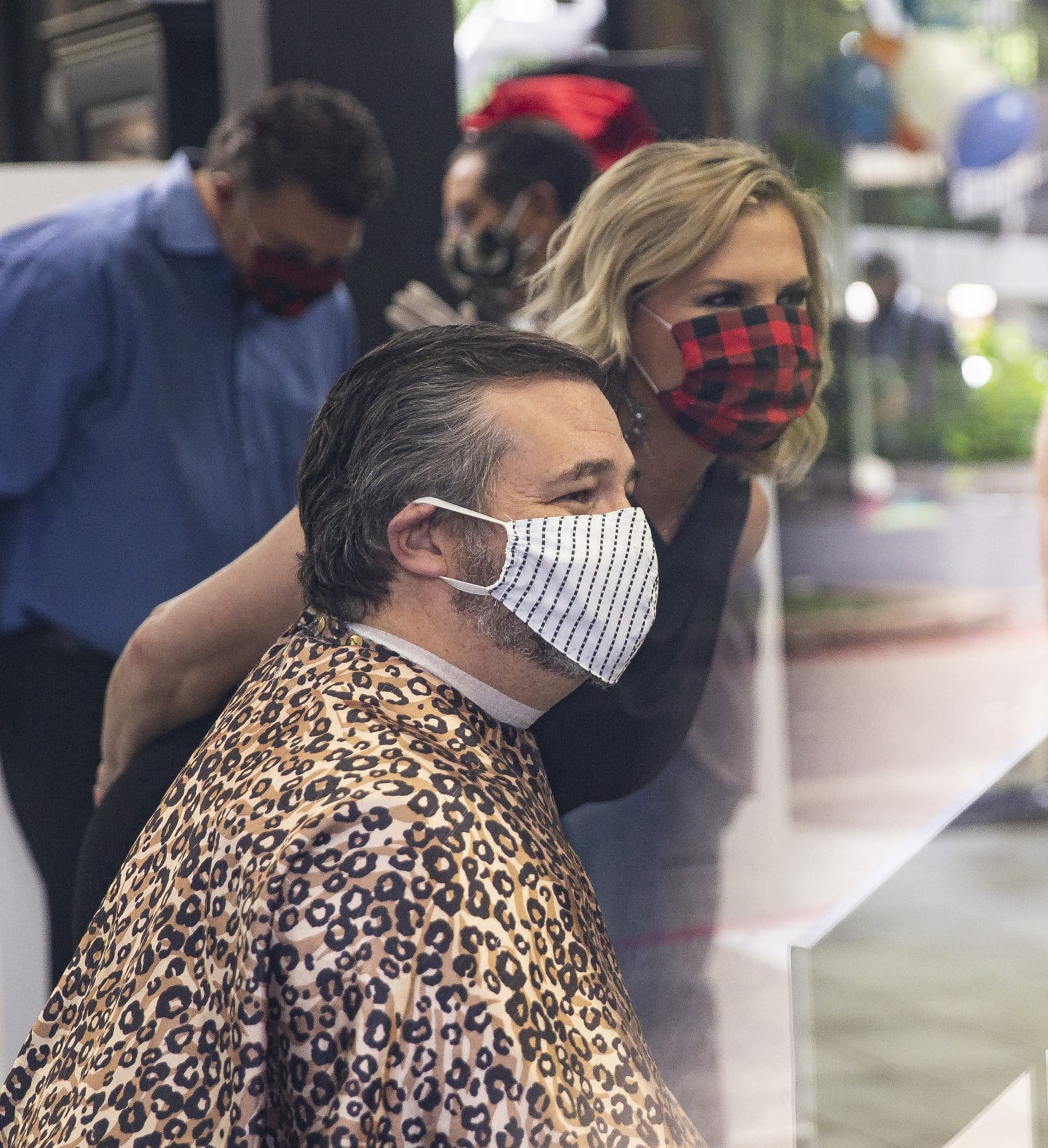 U.S. Sen. Ted Cruz chats with owner Shelley Luther before getting a haircut at Salon a la Mode on May 8, 2020 in Dallas. (Juan Figueroa/ The Dallas Morning News/TNS)

He ignored questions about what punishment he would view as appropriate for people who violate public safety measures during an epidemic, or how such measures can be effective if compliance is entirely voluntary.

Asked what message it sends for him to celebrate a scofflaw, Cruz said: “What I’m celebrating is justice.”

“It is injustice to sentence someone to seven days in jail for cutting hair, particularly when you’ve got local politicians releasing violent criminals, releasing child molesters from jail. And we’re going to lock up a small business owner? That is crazy,” he said.

If she had waited until Friday, she would have been in compliance with Gov. Greg Abbott’s stay-home orders. On Tuesday, he eased restrictions, allowing hair and nail salons to open on Friday. On Thursday, with Luther in jail, he clarified that people who defy his stay-home orders should not be arrested.

The Texas Supreme Court quickly ordered Luther freed from the Dallas County Jail, where she’d been serving a seven-day term for contempt of court.

President Donald Trump weighed in on the uproar Thursday afternoon, adding his approval for Abbott’s effort to free Luther.

“Good,” Trump told the governor during an Oval Office visit, adding, “I was watching the salon owner and she looked so great, so professional, so good. And she was talking about her children. She has to feed her children.”

Like other businesses deemed nonessential during the COVID-19 outbreak, Luther’s Far North Dallas hair studio was required to close on March 22. She reopened on April 24, and tore up a cease-and-desist letter from County Judge Clay Jenkins at a demonstration the next day.

Sarah Palin, the tea party darling who served as Alaska governor and the GOP nominee for vice president in 2008, showed up at the salon Wednesday to show support while Luther was still behind bars.

Lt. Gov. Dan Patrick vowed to pay Luther’s $7,000 fine — $500 for every day she’d kept the salon open unlawfully. Texas Attorney General Ken Paxton called the jail sentence “outrageous” and wrote to Moye, arguing that he had abused his discretion and should free Luther.

“We should not be taking these people and putting them behind bars, these people who have spent their life building up a business and being told to shut it down and lose every penny they have, and then, if they don’t follow every little fine point of all the rules, they suddenly are subject to arrest. That is wrong,” Abbott said Thursday in Washington.

Cruz said he was “disgusted” that Moye had demanded an apology from Luther for refusing to comply with state and county emergency regulations, and his own court order.

Asked what he thought about his haircut, he said “I think it’s terrific.”

He said it had probably been three months since his last cut, in part because he spent weeks in self-quarantine at his home in Houston after learning that he’d been exposed to people who later tested positive for the new coronavirus.

“Heidi was laughing at me. She said if I went much longer I was going to be sporting a full-on mullet,” he said, referring to his wife. Cruz added that other senators he’d seen in Washington this week seemed to be ahead of him. Sen. Rand Paul, R-Ky., was sporting a beard that looked “a little bit Duck Dynasty,” but “it sure did look like just about every other senator in the body had gotten a haircut.”