Revolutionary HX5 replaces aluminum at half the weight – can it help save the planet too?

Each year, hundreds of millions if not billions of internal research and development dollars go into developing concept technologies for the military and many of those technologies never result in an end product in the defense market. In 2014, Catalyze Dallas launched as one company hoping to turn those unused defense concepts into working products for public and private consumer markets.

Through a subsidiary company called Alpine Advanced Materials, Catalyze Dallas turned one of those unused defense concepts, HX5 thermoplastic, into a product with thousands of potential applications. The company touts HX5’s ability to replace aerospace-grade aluminum while maintaining 90 percent of aluminum’s strength and shockingly, at 50% the weight. Beyond the simple weight reduction, HX5 can withstand extreme temperatures and corrosion and has even proven resilient in the vacuum of outer space. 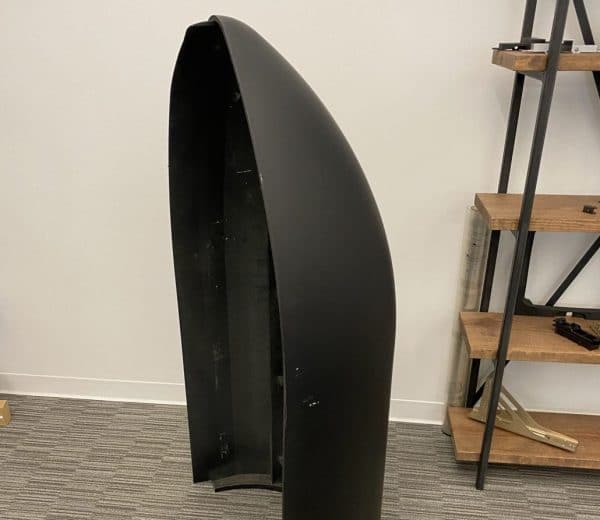 A half section of a 5 foot tall Missile nose cone made with HX5. (Photo by Alpine Advanced Materials)

The concept for the advanced thermoplastic was first born out of the needs of the advanced F-35 Joint Strike Fighter program. While not the first aircraft to employ carbon fiber parts, the F-35 employed carbon fiber to such a large degree that it birthed a need for new materials that could fit with different components without experiencing galvanic corrosion or dangerous thermal differences between materials.

“There were environmental elements at the speed that that plane flies and the heat that’s generated that would create abnormalities between the machined aluminum and the carbon fiber,” said Joe D’Cruz, who founded Catalyze Dallas with his wife Tricia D’Cruz.

With the existing design constraints, Joe D’Cruz said Lockheed Martin scoured the marketplace for an alternative, but eventually had to turn inward for a solution. They conceptualized HX5 to resolve their F-35 wingtip problem and after eight years and more than $50 million in development costs the thermoplastic became a reality. 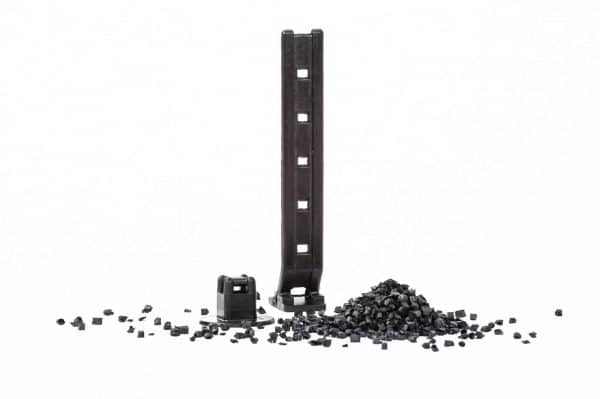 The material satisfied the design requirements to survive the conditions under which the F-35 would be expected to fly.

HX5 touts many other viable uses. It can also be shaped, machined, and threaded just like the aluminum it was meant to replace without chipping, cracking or galling.

“It’s very common for advanced materials or subcomponents . . . to sit on a shelf in big corporations because it doesn’t fit the aperture of their product needs,” said Frank Cappuccio, who previously ran the Skunk Works division of Lockheed Martin and oversaw HX5’s development when it first began.

HX5 saw some limited use but failed to see wide-scale adoption across Lockheed Martin’s scope of projects. Cappuccio said he had envisioned many possibilities for HX5 that Lockheed Martin just wasn’t ready to implement at the time.

Cappuccio said many defense industry companies don’t have a mindset geared towards expanding the uses of their products beyond the single applications before them.

“Lockheed will say ‘I will use this material in the F-35 because it saves me money’ . . . as opposed to them saying you know, ‘I could use this material to make skis or rails, or stereo parts,’” Cappuccio said. 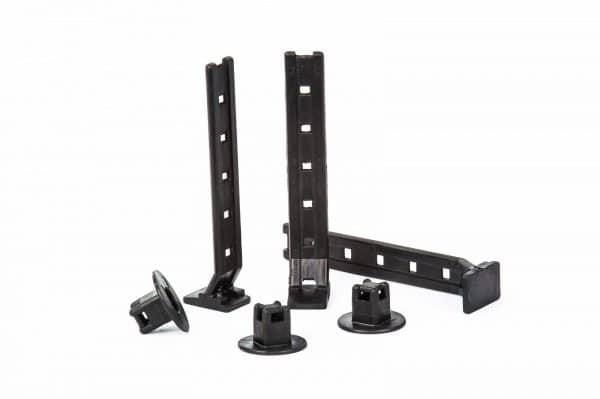 “Lockheed Martin said we could proliferate HX5 internally to other business units faster than they could,” Joe D’Cruz said.

Cappuccio went on to join Catalyze Dallas’ and Alpine Advanced Materials’ boards and from there he said it was easy to work with The D’Cruz’ and conceive of new possibilities for HX5.

Alpine Advanced Materials completed the contract to produce HX5 in January of 2019 and launched into the commercial aerospace market by April of that year.

One of the first goals was to get an idea of every conceivable use for HX5. The first advantage of the material that became immediately obvious was its weight reduction.

“The potential to reduce weight is huge and it’s a benefit across the board,” said Rob Weiss, who took over Skunk Works after Cappuccio and also joined the Catalyze Dallas and Alpine Advanced Materials Boards of Directors after leaving Lockheed Martin. “Essentially, weight is an enemy of most of our mobile systems.”

Weiss said the weight-saving potential of HX5 is one of his favorite selling points for the material. The ability to cut weight lends itself easily to other attractive selling points such as expanded cargo space, prolonged flight range, cost savings in terms of fuel, and the ability to reduce greenhouse gas emissions.

Fuel savings can be an obvious selling point for the aviation industry as fuel costs have shown to be a highly variable expenditure for the airline industry. According to data from the U.S. Bureau of Transportation Statistics, fuel consumption by U.S. carriers in 2018 increased by 3.3. Percent over 2017 while average fuel costs increased by 27.33 percent. Fuel consumption by U.S. carriers increased again in 2019, by 2.5 percent over 2018 numbers.

In a study where Alpine Advanced Materials partnered with a tier-one commercial airline interior manufacturer and used HX5’s to replace just a few parts on a Boeing 777-300ER, they observed a weight savings of nearly one ton. That particular scenario only looked at replacing a mere 34 specific machined aluminum parts commonly used in aircraft interiors.

Joe D’Cruz said HX5’s ability to provide weight reduction remains a “pretty linear” equation on commercial aircraft for quite some time. He said the particular airline interior parts manufacturer and the airline that provided the Boeing 777 for the scenario are currently working with Alpine Advanced Materials on multiple projects, including an effort to see what additional parts they can replace with HX5 components, in the hopes of cutting even more weight.

The U.S. Air Force’s Operational Energy Office provided Joe D’Cruz with numbers describing the Rough Order of Magnitude estimates for fuel savings from weight reduction on their KC-135 and C-17 Globemaster aircraft. From those numbers, he said, “Depending on who you ask, it’s probably anywhere from one to three percent [of increased fuel efficiency] per thousand pounds.”

These weight savings add up quickly.

Another Catalyze Dallas company, Metro Aerospace, has already provided significant fuel savings for some military transport aircraft. Metro Aerospace was Catalyze Dallas’ first foray into commercializing defense concepts. The company implemented Microvanes™ that redirect the airflow on the tail of transport planes like the C-130J, C-130H and the company hopes to put Microvanes on the C-17 in 2020. 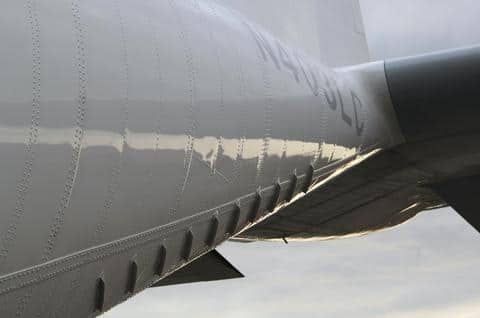 Those Microvanes can improve the fuel efficiency of a transport plane and extend their mission time in crucial moments as a result. Joe D’Cruz said the Microvanes have also been shown to lower the operating temperatures of military aircraft by as much as 40 degrees Celsius, saving further money by reducing the wear on aircraft engines and subsequently relieving maintenance needs. Rolls Royce, the engine manufacturer for the C-130’s Allison T-56 engines, told Joe D’Cruz that the reduction in heat could extend the lifetime of a hot section of the engine by over 200 percent, effectively reducing maintenance needs by half

Since Metro Aerospace began implementing Microvanes in 2017, the company has successfully added the new Microvanes to 50 C-130J and C-130H planes. Joe D’Cruz estimated the product has added up to $10 million in fuel savings and has cut around 43 million pounds of carbon emissions from the fleet in about two year’s time. Based on estimates provided to him by U.S. Air Force’s Air Mobility Command (AMC), Joe D’Cruz estimated each C-130H could, on average, see $83,000 in fuel savings and cut 350,000 pounds of carbon emissions annually.

Metro Aerospace aims to add Microvanes to between 500 and 700 more aircraft over the next three years.

Joe D’Cruz says that now every time he goes to the Pentagon to talk about one of Catalyze Dallas’ products, another branch or military official is asking how his products can help their next project.

Evidently HX5 has the right stuff. Along with uses on commercial and military aircraft, it has made its way onto missile platforms and both commercial and military space satellites where it is used to hold solar panels, interior insulation panels and heat sinks for electronic components. The thermoplastic’s lightweight nature is an attractive selling point for the space industry as NASA estimates show it costs $10,000 on average to get a pound of payload into orbit around the earth. 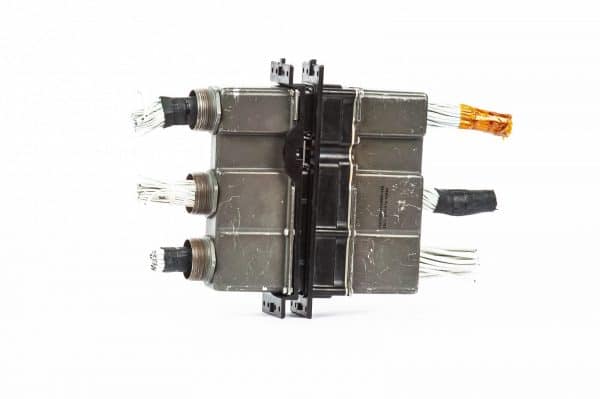 An ARINC connector piece, for use housing aircraft avionics components, made from HX5. (Photo by Alpine Advanced Materials)

Looking forward to the next space applications, The D’Cruz’ said they hope to see HX5 used on exploratory vehicles, rovers and even the first space suits to walk on another planet.

Joe D’Cruz said he sees other future uses for HX5 at sea, given the thermoplastic compound’s ability to withstand saltwater and corrosion.

Closer to solid ground, HX5 has been proposed to help reduce the weight of military land vehicles and solve their propensity for deadly rollover incidents. Contenders vying to create the U.S. Army’s Next-Generation Squad Weapon have also sought information about how HX5 could play a competitive role as contenders need a modular and lightweight design.

For the time being, Tricia D’Cruz said many HX5 users remain secretive about their use of the thermoplastic for both security reasons and the competitive edge it may hold in several industries.

The team at Alpine Advanced Materials, believe that once early adopters of HX5 have the chance to impress customers and competitors alike, the new material will become a preferred material for commercial and military aviation components alike.