With bad weather hovering over the Space Coast Wednesday, SpaceX and NASA had to postpone their return to space until the weekend.

The mission plans to take astronauts Bob Behnken and Doug Hurley to the International Space Station, the first time in nine years that an American crew has taken off from American soil since the end of the space shuttle program nine years ago.

“We are not going to launch today.”

Due to the weather conditions, the launch is scrubbing. Our next opportunity will be Saturday, May 30 at 3:22pm ET. Live #LaunchAmerica coverage will begin at 11am ET. pic.twitter.com/c7R1AmLLYh

But weather for a crewed mission is a complicated cocktail of different components: How good the weather is at the launch site, at the area in the ocean where SpaceX’s booster lands back after liftoff, and, critically, at the potential sites where the crew might abort and splashdown in the case of an emergency mid-flight.

It was weather hovering off the pad that spoiled SpaceX and NASA’s plans on Wednesday, taking teams down to almost 4:33 p.m. EDT, when the mission was originally scheduled to launch, before the decision to scrub was made. 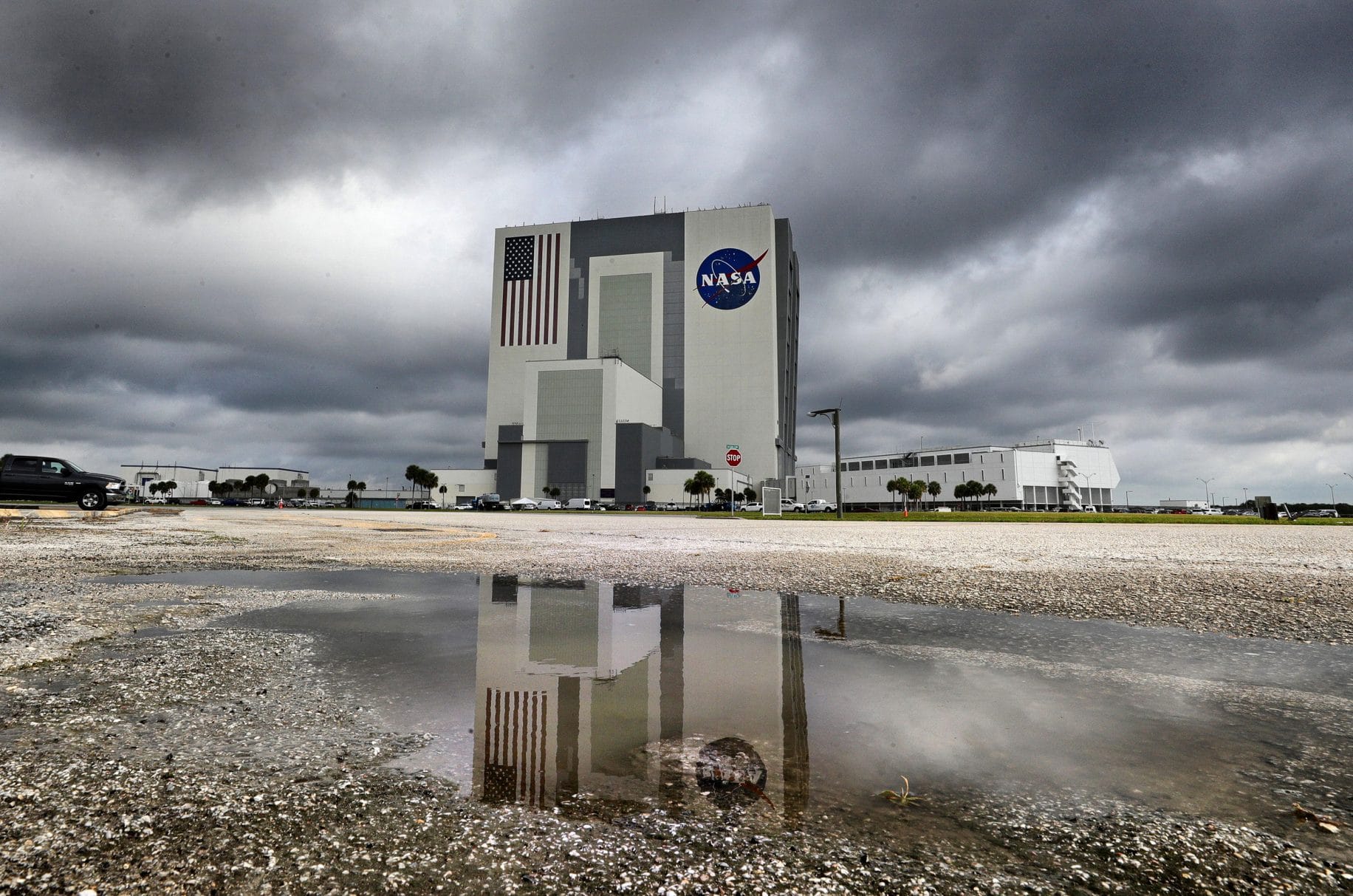 The Vehicular Assembly Building near Launch Pad 39-A is reflected in a puddle at Kennedy Space Center, Fla., Wednesday, May 27, 2020. Afternoon thunderstorms are a concern for the scheduled launch time at 4:33 p.m. of the Space X Falcon 9 carrying two astronauts in the Crew Dragon capsule. The mission, called Demo-2, is flying to the International Space Station. (Joe Burbank/Orlando Sentinel/TNS)

The teams and NASA and SpaceX will now work toward a Saturday launch scheduled for 3:21 p.m. from Kennedy Space Center’s launch complex 39A. A second back-up date is set for Sunday at 3 p.m.

But weather might also play a factor then. The Air Force’s 45th Weather Squadron will be looking at a subtropical ridge that could threaten conditions over the weekend. There is potential that the weather will clear around the spaceport, forecasters said, but conditions Saturday and Sunday are still only 60% favorable for launch. The primary concerns: Rain and cloud cover in the afternoon, as well as thicker cloud rule on Sunday.

NASA will still be monitoring the more than a dozen conditions that would trigger a no-go call in terms of weather. The agency will not launch if the weather downrange has a “high probability” of getting in the way of a safe abort.

The agency monitors wind, waves, lightning and rain at more than 50 locations along the North American eastern seaboard and across the North Atlantic Ocean to the coast of Ireland.

NASA has two military cargo planes ready to take off in the case of an emergency, and additional planes are stationed in New York and England in the case a water rescue is necessary following an abort, said Kathy Lueders, manager of NASA’s Commercial Crew program.

The program has been in the works for more than a decade and it culminates with its first crewed launch, a test of SpaceX’s Crew Dragon vehicle that’ll take Behnken and Hurley to the space station for at least a monthlong trip.

The two astronauts went through the motions on Wednesday, waking up around 9 a.m. to have breakfast — steak and sunny-side-up eggs, Hurley tweeted. They walked out in beige cargo shorts to put stickers on the Tesla Model X SUVs that would have taken them out to the pad ahead of the launch.